Battle of the White Mountain 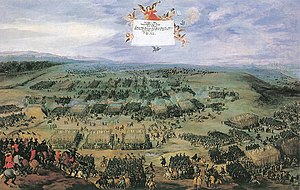 The Battle of White Mountain ( Czech Bitva na Bílé hoře ) near Prague on November 8, 1620 was the first major military conflict in the Thirty Years' War . During their course, the troops of the Bohemian Estates under their King Friedrich V of the Palatinate and his military leader Christian I of Anhalt were subject to the imperial and Bavarian troops of the Catholic League under the orders of Buquoy and Tilly . After his defeat, Frederick V, the so-called Winter King , had to flee Bohemia. Emperor Ferdinand II was able to enforce his claim to the crown of Bohemia .

If one considers the strategically favorable position of the Bohemian army, which held the ridge, it seems a remarkable achievement that the imperial troops nevertheless managed to win. On the morning of November 8th, Tilly is said to have been convinced of the impregnability of the White Mountain.

According to legend, the Carmelite Dominicus a Jesu Maria entered the imperial camp and carried a portrait of the Holy Family from the Strakonice Castle, which had previously been plundered and burned , and where Mary and Joseph had their eyes gouged out by Protestants . The desecrated image and its words that one must avenge this outrage allegedly embittered the troops so much that they stormed the mountain with the battle cry “Santa Maria!” Within a very short time. The Bohemian army is said to have been completely taken by surprise by this unexpected attack, so that they got into disarray and fled. On May 8, 1622, the image that sparked the victory on White Mountain was carried to the Church of the Discalced Carmelites in Rome and attached to the main altar. The church, which until then had borne the patronage of the Apostle Paul, was then called Santa Maria della Vittoria (Holy Mary of Victory) . However, the original Madonna picture was destroyed in a fire in 1833.

Frederick V fled into exile, and since he could only maintain his rule as King of Bohemia for a little more than a year, he was nicknamed "Winter King".

Monument from 1920 on the summit, in the background the Stern hunting lodge , which today houses an exhibition about the battle

Around noon on November 8, 1620, the right wing of the imperial troops started moving towards the Protestant army, followed by the Spanish cavalry and the Walloon infantry on the left wing. Already at this moment, larger parts of the opposing army began to flee, but others fought doggedly against the soldiers of the imperial league troops marching uphill. Thus, under the command of Christian II of Anhalt (son of Commander-in-Chief Christian von Anhalt), the soldiers managed to repel the Spanish cavalry and subsequently to break up a Walloon unit. With these impressions, Tilly gave the Italian and Polish cavalry the order to attack, which subsequently succeeded in breaking up the enemy Hungarian cavalry and driving them into the Vltava , where many drowned.

Now, taking advantage of the numerical superiority that had now arisen, the entire Catholic army set in motion and fought the remaining Protestant soldiers in hand-to-hand combat. During this phase of the battle, the young lieutenant colonel Gottfried Heinrich zu Pappenheim was seriously wounded. Meanwhile, more and more Anhalt soldiers fled towards Prague, where one slowly became aware of the impending defeat. King Frederick, who the day before had ridden off the lines and exhorted the soldiers not to abandon either his or the Bohemian cause, had rushed back to Prague to beg the Bohemian estates for money for his troops and to send the envoys of the English king to them from whom he hoped to receive the long-awaited news about the support of his father-in-law Jakob I. It was too late, however. When Friedrich wanted to ride back from the city to the troops around noon on November 8th, he met fleeing soldiers from his army and his Chancellor Christian von Anhalt at the city gate, who informed him of the disaster. He went into hiding in Prague's old town , fearing extradition to the Bavarian Duke, and fled the next day in the direction of Breslau .

As a result of the lost battle, 61 leaders and supporters of the Bohemian side were captured. 27 of them were executed on June 21, 1621 on the Old Town Square , including Kaspar Cappleri de Sulewicz , Jan Jessenius and Joachim Andreas von Schlick (22 of Czech and 5 of German origin) . The imperial ban was imposed on Friedrich V and his general, Prince Christian I of Anhalt-Bernburg (illustration in the article Imperial ban ).

The battle of the White Mountain is significant for the further history of Central Europe, as it opened the way to recatholization and the implementation of absolutism in the Austrian and Bohemian countries . In Rome, a church under construction was consecrated as a thank you to the patronage of Mary of Victory . The Our Lady of Victory on the Lesser Town with the Infant Jesus of Prague is in this context to mention. The Estates of Bohemia were completely disempowered by the Renewed State Order issued by the Emperor in 1627 . Thousands of Bohemian Protestants fled to Germany as exiles and found a new home there.

The battle also had a decisive effect on the history of the Czech language , since as a result the educated class of the Czech people switched to the German language. The Czech had to be revitalized as a written language in the late 18th / early 19th century in the Czech rebirth movement , which is still audible today as diglossia .

Commons : Battle of the White Mountain  - Collection of images, videos and audio files