Countries of the Bohemian Crown 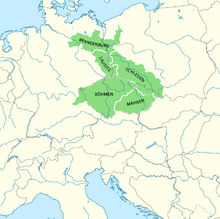 Countries of the Bohemian Crown under Charles IV.

In the 12th and 13th centuries, only Bohemia , the Margraviate of Moravia and the County of Glatz were permanently linked. Under the Luxembourg kings John and Charles IV , the Silesian duchies , the Upper and Lower Lusatia and a large number of smaller imperial fiefs, were added to the Polish state association, politically and dynastically independent since 1202 . In the Treaty of Trenčín in 1335, the Polish King Casimir the Great finally renounced the feudal sovereignty over Silesia against King John of Bohemia , after many Silesian princes had previously recognized Bohemian suzerainty. With the Treaty of Namslau on November 22, 1348, the Trenčín Treaty was confirmed. The formal connection of individual territories with the crown of Bohemia was known as incorporations .

Charles IV decreed that the country connection should endure regardless of the dynastic developments, even if the Luxembourgers should one day die out. This was also maintained under the Habsburgs since Ferdinand I inherited the lands of the Bohemian crown for the House of Habsburg in 1526 . In the Habsburg Monarchy, these countries, like the countries of the Hungarian crown and the Austrian hereditary countries , formed one of the three main parts of the Central European territory of this dynasty.

The Bohemian crown was neither a mere personal union nor a federation of members with equal rights. Instead, the Kingdom of Bohemia and its estates were considered the head , the other countries as the members . While the Bohemians emphasized the difference between mainland and neighboring countries and, in addition to their internal leadership role, claimed sole representation of the state, Moravians, Silesians and Lusatians emphasized the political autonomy of their countries, which would ultimately have voluntarily united with Bohemia.

The leadership role of Bohemia was not fundamentally questioned by the estates of the neighboring countries, although they have persistently demanded more rights, for example participation in the election of a king, since the beginning of the 15th century. This was due to the ailing economic and political situation in the Kingdom of Bohemia, not least as a result of the Hussite Wars . After 1620 these rivalries became less important, as the countries of the Bohemian crown had to fit into a much larger overall monarchy.

With the formal recognition of the Hussites by the Catholic king in 1436, the Kingdom of Bohemia had largely isolated itself in terms of religious policy in its neighborhood. Between 1468 and 1478 Hungary even waged a war against Bohemia for (partly) religious reasons. Only the Margraviate of Moravia , which was administered by Catholics, although the recognition was also formally valid here, was largely able to avoid isolation. This political problem persisted until the Reformation in the first half of the 16th century, when a Protestant camp arose in the empire and the margraviate of Niederlausitz and some duchies in Silesia adopted Lutheranism a little later .

1575 was commissioned by the non-Catholic countries of the Bohemian crown by Hussite Neuutraquisten and Lutherans wrote Confessio Bohemica . The formation of a regional church did not succeed , but with the Majesty's letter of 1609, against the pressure of the Counter-Reformation, the Protestant faith was approved in the Bohemian crown lands. The threat to this success of the Protestant estates soon gave rise to the Bohemian uprising that sparked the Thirty Years' War .

Apart from the king, the Bohemian crown had no joint state organs, which was a great disadvantage in times of crisis. The stands of all countries rarely met for general assembly meetings . Only the Bohemian court chancellery under the leadership of the Chancellor, who headed the Bohemian state offices , was responsible for all countries of the crown. The office was relocated from Prague to Vienna in 1620 , where the building opened for them in 1714 still exists under this name.

Although there were hardly any institutions, political ties between the countries of the Bohemian crown grew closer and closer, especially in the 16th century. At the beginning of the Thirty Years War it seemed that the Confoederatio Bohemica could decisively modernize the political system of the Bohemian crown. With the battle of the White Mountain (1620) won by the imperial army , this constitutional experiment was quickly over.

In the following period, the crown of Bohemia lost more and more importance as a state structure in the early modern Habsburg monarchy. As early as 1635, in the Peace of Prague, Lusatia was separated and given to Saxony. The events after 1620 brought about a long-lasting political decline of the Czech state nation of Bohemia, the Czech language was increasingly displaced by German .

During the Silesian Wars in the middle of the 18th century Austria lost most of Silesia and the County of Glatz to Prussia . The rest of Silesia remaining with Austria was listed as the Duchy of Upper and Lower Silesia in the court and state calendar until 1918 as the land of the Bohemian Crown; special rights of the crown lands Bohemia, Moravia and Austrian Silesia in Cisleithanien did not exist. 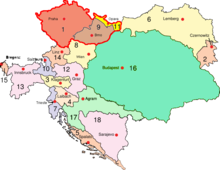 Countries of the Bohemian Crown (highlighted) within Austria-Hungary , 1910

When Cisleithania and Austria-Hungary fell apart in October / November 1918, the Czechs pushed through the borders of the countries of the Bohemian Crown for the western part of the Czechoslovak Republic , as agreed by their politicians in exile with the Triple Entente since 1916 . The appeal of German Austria to the self-determination of the peoples proclaimed by Woodrow Wilson was unsuccessful for German Bohemians, German Moravians and Austrian Silesians .

The countries of the Bohemian Crown have formed today's Czech Republic with small differences, for example in Valtice / Feldsberg or in the Olsa area .