The title of this article is ambiguous. See also Lübben (disambiguation) .

Lübben (Spreewald) , Lubin (Błota) in Lower Sorbian , is the district town of the Dahme-Spreewald district in Niederlausitz in the state of Brandenburg . Since June 2, 1999, the city has been a state-approved resort .

The Spreewaldstadt is part of the official settlement area of ​​the Sorbs / Wends in Brandenburg.

Location of Lübben in the Spreewald

The Spree , the Berste , the Burg-Lübbener Canal, the Red Nile and the Great Fliess , which form the southeastern border, flow through the city of Lübben .

The name of the city is probably derived from a Slavic personal name "Luba". Many legends and stories in the city relate to the Sorbian goddess of love and fertility, Liuba . A memorial stone in the grove between the old town and the train station commemorates her , and a school in the city bears her name.

The castle Luebben was as urbs lubin in 1150 for the first time in an inventory of the possessions of the monastery Nienburg mentioned.

Between 1210 and 1220 the Magdeburg city law was introduced in Lübben. The urban development was favored by the strategically and logistically outstanding geographical location between Ober- and Unterspreewald . 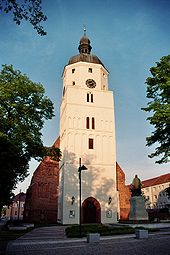 Around 1300 the town became the property of the Dobrilugk Monastery ( Doberlug-Kirchhain ), under whose rule it remained until 1329. It was then acquired by Duke Rudolf of Saxony . After long armed conflict came Lubben 1373 together with the Lower Lausitz under the rule of Emperor Charles IV. , Of the Margravate in the Bohemian crown incorporated . The Saxon princes remained the lords of Lübben until 1422. In the time of the Hussite Wars , Lower Lusatia became the pledge of the bailiffs appointed by the Bohemian king. During this time Lübben became more and more a free sovereign city, even if the sovereign Hans von Polenz (1422–1437) resided in the sovereign castle of Lübben. On October 18, 1448, the city was occupied by the Brandenburg margrave Friedrich II . This forced the brothers von Polenz to sell him the town and castle of Lübben for only 10,000 Rhenish guilders . Since 1462 Lübben was again directly under the rule of the Bohemian kings and came under the rule of the Habsburgs as part of the crown in 1526 . Lübben became part of Electoral Saxony in 1623 (finally 1635) together with the entire Lower Lusatia .

During the Thirty Years' War , the city of Lübben and the surrounding settlements were repeatedly victims of pillaging and pillaging troops from various fighting parties.

Lübben had been the capital of the Lower Lusatia margravate since the 15th century . There had Landvogt its headquarters and most of the diets of Niederlausitzer stalls were held in Lubben. In 1815 Lower Lusatia became Prussian, the margravate was attached to the province of Brandenburg and Lübben lost its function as the capital of the region that had been autonomous for centuries . It became the district town of the Lübben district in the Prussian province of Brandenburg .

Lübben had been the garrison of the Brandenburg Jäger Battalion No. 3 since 1827 .

During the time of National Socialism , the synagogue of the Jewish community in today's Kirchstrasse , built around the turn of the century, was desecrated and destroyed during the pogrom night of 1938. Since 1988 a memorial stone in the garden behind the new building No. 3/4 has been a reminder of the church. The Jewish cemetery was also destroyed and the tombstones were used for paving the streets. In 1955 the VVN erected a memorial for the dead in the extension of the Majoransheide .

At the end of the Second World War , Lübben briefly became a focal point in history in the Battle of Berlin : In the planning of the Red Army's attack , the interface between the two Soviet army groups, the 1st Belarusian Front of Marshal Zhukov and the 1st Ukrainian Front was located of Marshal Konev at Guben . Since the formation on the Oder, but not the further advance (and thus the conquest of Berlin) was clearly assigned to one of the two fronts and the two marshals vied for the favor of Stalin , he drew a dividing line on the map from the Oder straight to Lübben . There the line ended and Stalin declared that the one in command whose troops reached the place first should march into Berlin from the south.

Since Zhukov's troops made slow progress in front of the Seelow Heights after the attack began on April 16, Konjew was able to reach the area around Lübben on the following day with a daring advance of his 3rd Guards Panzer Army. Stalin gave him permission to attack Berlin directly. The city itself was defended by the German 9th Army and only fell a few days later. In the fierce house-to-house fighting, 85 percent of Lübben was destroyed. Over 300 soldiers from both sides and 500 civilians lost their lives.

The GDR established one of its largest armaments factories near Lübben, which manufactured ammunition for the NVA until 1990 .

Extensive administrative changes were made after German reunification , and in 1993 Lübben gained the status of the district town of the Dahme-Spreewald district. She shares the offices with Königs Wusterhausen , located near Berlin . The district office and youth welfare office are located in Lübben, while Königs Wusterhausen, for example, houses the responsible tax office and a youth detention center.

With the start of the archaeological preliminary investigations in July 2002, extensive redesign and development of the city center began. Between 2004 and 2011, new residential and commercial buildings were built around the market square. The redesigned marketplace was inaugurated in 2006. Since 2010, houses on Brückenplatz that had been destroyed in the Second World War have been rebuilt.

On September 23, 2008, the city received the title “ Place of Diversity ” awarded by the federal government .

Population development of Lübben from 1875 to 2017

Until the death of the deacon Fritze in 1790, Lower Sorbian (Wendish) was preached in Lübben , since then only in German. The population of the surrounding villages Neuendorf, Treppendorf, Groß Lubolz and Hartmannsdorf, which around 1750 was still almost entirely Wendish, was subsequently Germanized. Arnošt Muka found no Wendish residents there in 1884.

The city council assembly of the city of Lübben consists of 22 city councilors in addition to the full-time mayor. The local election on May 26, 2019 resulted in the following distribution of seats:

→ Main article : "Mayor" in the article List of personalities of the city of Lübben (Spreewald)

Blazon : "In gold, a black eagle with a red tongue and red fangs."

House Burglehn on the site of the old Slavic castle 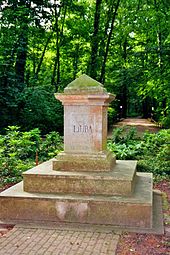 Liuba stone in the Lübben grove

Beauty in Lubben are adjacent to the grove and the Island of Love , the castle island that exists in its present form since the 1998th In the years after the Second World War , the remains of the rubble that the war had left accumulated there. The island was later redesigned, creating rivers and a stepped hill . A water playground and another sand playground were also built. Today concerts and cultural events take place there. South of the city was the Slavic castle Lübben in the Middle Ages , the remains of which around the Haus Burglehn inn can still be guessed.

The approximately 20 hectare Lübbener Hain lies between the old town and the train station and is the remainder of an alluvial forest at the mouth of the Berste . It was already mentioned in the Middle Ages. In the grove there are around 220 English oaks with an age of around 180 to 250 years and a height of around 30 meters. A memorial stone commemorates the Slavic goddess of love and fertility, Liuba . It is believed that there was a place of worship in the grove for their worship.

Lübben is the center and starting point of the open-air art festival aquamediale , which takes place in the summer months and is visited by over 100,000 guests every year.

The health sector is particularly well represented in the district town with its three clinics . The clinics have supraregional importance and a catchment area as far as Berlin.

For Lübben, as a state-recognized resort , tourism is one of the most important branches of the economy. With 3714 guest beds, around 1500 jobs are assigned to him. According to statistical figures from the tourism association Lübben (Spreewald) und Umgebung e. V. in 2010 a total of 55,776 overnight guests with 298,048 overnight stays in the city.

As of 2018 there are the following schools in Lübben:

The most important sports clubs in the city are the Grün-Weiß Lübben football club , which plays in the Brandenburg League in the 2018/19 season , the HC Spreewald handball club and the Lübben 94 dance club, which is responsible for training school sports teachers in the state of Brandenburg .

The most important sports facilities in Lübben are the Stadium of Friendship of Nations and the multi-purpose hall "Blaues Wunder". There is also a youth fire brigade in Lübben.

See: List of personalities of the city of Lübben (Spreewald)