Location on the city limits of Berlin

Eichwalde is a municipality in the district of Dahme-Spreewald in Brandenburg in Germany .

Eichwalde is located directly on the south-eastern city limits of Berlin . The Berlin district bordering to the north and east is Schmöckwitz . The southern neighboring municipality is Zeuthen , the western Schulzendorf .

The urban development merges seamlessly with those of the three neighboring communities on all sides. Eichwalde thus has no broad growth opportunities. The Schmöckwitz settlement north of Waldstrasse (which forms the state border here) can only be reached from the rest of Berlin via Eichwald area. In the east of the municipality, Eichwalde has a narrow access to the Zeuthener See . There is a bathing beach ("bathing meadow") and several boat docks.

With only 2.8 km², Eichwalde is the smallest municipality in Brandenburg and the second highest population density behind the similarly structured Glienicke / Nordbahn on the northern outskirts of Berlin. In 2012, Eichwalde ranked 24th in terms of population density among the more than 12,000 municipalities in Germany . According to a study by the Märkische Allgemeine Zeitung in 2010, Eichwalde is also the municipality with the highest per capita income in the Dahme-Spreewald district .

Eichwalde has no districts, inhabited parts of the municipality or places to live .

The place was in 1673 for the first time as Rahdelandt mentioned, and at the time was a freehold , ie a tax-free country estate of the city majors A. burbot. In 1700 there was a place called Sandacker, called Radeland, in front of Zeuthen , which had been cleared and cultivated by the Heideläufer and Krüger zu Schmöckwitz. However, they had to pay the costs for the sowing to the Köpenick office . In 1743 the spelling Radeland appeared for the first time , at that time in connection with a Vorwerk and a mutton barn. Ten years later it came from the office of Köpenick to the rule of Königs Wusterhausen - like many other surrounding communities by buying up the king. As a result, it appeared as a royal Vorwerk in 1773, when two Palatinate colonists were settled in 1781 . In 1801 the place was run with a dairy not far from Schmöckwitz . A Büdner and four residents with three fireplaces (= households) lived there. Eichwalde had belonged to the Teltow district in the Prussian province of Brandenburg since 1817 .

In 1840 only one Vorwerk with four houses was known. In 1858 a manor appeared with a landowner, a tenant as well as four male and female servants and seven day laborers. The estate was 1,076 acres. There were also two other properties that together only made up four acres. For the first time, however, a ship owner appeared with an assistant. In 1860 the place had grown to four residential and five farm buildings. Gradually the areas were parceled out and a villa colony was created. Nevertheless, Radeland, as the place was still called, was characterized by agriculture. The residents managed 635 acres of forest, 375 acres of arable land, 52 acres of meadow, 17 acres of pasture and one acre of garden land. The homesteads took up an area of ​​five acres.

With effect from March 20, 1893, the estate for settlers was divided by conversion and renaming to Eichwalde. Eichwalde was churched in Schmöckwitz until 1899, but in that year it became an independent parish and mother church with the daughter churches in Neu-Zittau, Schmöckwitz and Wernsdorf. The population rose sharply and in 1900 there were already 179 houses. This also gave rise to the desire for a separate village church , which was built between 1906 and 1908 by the builder Rudolf Vahl according to plans by the German architect Carl Zaar . In 1931 there were already 398 houses. This was also reflected in the economic structure, because in 1939 only two farms were still active, cultivating an area of ​​0.5 to 5 hectares.

After the Second World War , Eichwalde came to the Königs Wusterhausen district in the GDR district of Potsdam in 1952 . In 1955 a VEB Holzbau was founded with 133 employees. In 1973 a VEB Hoch- und Betonbau and a PGH for the hairdressing and orthopedic shoemaking trade were added. The community has been in the Dahme-Spreewald district in Brandenburg since 1993.

The local council of Eichwalde consists of 18 community representatives and the full-time mayor. The local election on May 26, 2019 resulted in the following distribution of seats:

However, the AfD had only put up one candidate, so that the party only has one seat in the municipal council.

In 2007, the municipality's first student parliament was elected by students from the Humboldt Gymnasium and the Humboldt Elementary School under the name of the Eichwalde Children's and Youth Parliament (KJP for short). This project, which was one of the first of its kind in the region, is intended to enable young people and children to participate in local events, including budget advice.

Blazon : "In gold on green ground a green oak with golden fruits."

The Eichwald coat of arms shows the 300-year-old Friedenseiche in Friedenstrasse.

The flag is, when hung on a crossbar, striped lengthways in green and gold (yellow) and bears the coat of arms of the municipality across the center.

Eichwalde has a Polish partner municipality: Ośno Lubuskie (Drossen) in Neumark, formerly in Brandenburg . The place is 85 kilometers from Eichwalde, northeast of the border town of Frankfurt (Oder) .

The old fire station is the community's cultural center. In the house there are exhibitions, concerts, readings and other artistic and cultural events organized by the cultural advisory board of the municipality of Eichwalde, the Kind & Kegel association, the Alte Feuerwache friends' group and the Heimatverein.

The archive of German beer labels shows a historical and systematic overview of the labeling of beer bottles. The more than 23,000 exhibits can be viewed by appointment. 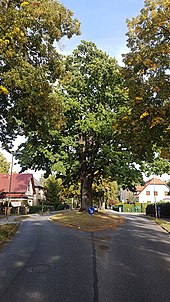 The Friedenseiche in the Friedenstrasse can be found in the city arms.

The Eichwalder Nachrichten is an independent online magazine for Eichwalde and communities in the neighborhood.

The Berlin-Schoenefeld airport is around 7 km as the crow flies. It can be reached with the 738 bus.