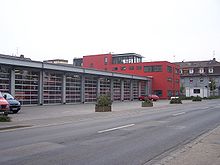 The fire station , and fire station , fire station , -zeughaus , -rüsthaus (Austria), fire watch (Switzerland), Fire Brigade (South Tyrol) or fire station , is the accommodation of the fire service in one place. Since today these buildings are not only used to store equipment, but also and essentially for the storage of vehicles and for training fire brigade members, the term fire station is used in Germany . In addition to the emergency vehicles, it houses lounge and sanitary rooms for the team, administrative areas and workshops. Depending on the size of the fire brigade, you will find all of the systems listed below or only parts of them.

Fire stations are almost exclusively the fire brigade accommodations at the professional fire brigades (BF) or volunteer fire brigades (FF) with full-time staff, as they are constantly manned, i.e. constantly on guard. They also serve, among other things, to store equipment and fire engines as well as to train fire service members, but also include common rooms.

In earlier times, the expressions `` Spritzenhaus '' or ` ` Feuerwehremise '' were also used for this . Also fire-fighting props Depot or similar names were used. 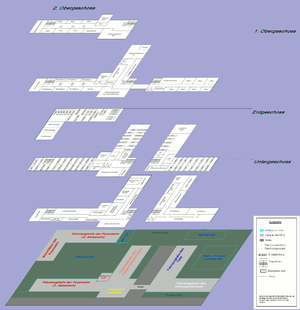 Plan of a modern rescue, fire and disaster control center

View into a modern vehicle hall

In the vehicle hall the fire engines are housed. Each vehicle has its own, permanently assigned parking space, where it is also supplied with electricity (battery charge maintenance ) and, if necessary, compressed air (brakes on trucks) so that it can be deployed as quickly as possible. An extraction system should be available in all fire stations. However, this is often not available across the board, especially among volunteer fire brigades.

In professional fire brigades with multi-storey buildings, the vehicle hall is often connected to the bedrooms of the security department by sliding bars.

The head of the guard's room

A guard department leader is always present at larger fire brigades . His room is usually next to the vehicle hall, which enables him to move out quickly.

Changing facilities in the vehicle hall

After a mission, the crew can take off their dirty clothes in the changing rooms so that they can be cleaned in the clothes closet. In the case of voluntary fire brigades, the operational clothing is stored in lockers in the changing room or on hooks in the vehicle hall and is put on there before an operation.

The changing rooms are usually located in the immediate vicinity of the vehicle hall or (especially in the case of older and smaller fire stations) in the vehicle hall. The fire brigade arriving in civilian clothes change clothes and occupy the vehicles. After the mission, the clothes are exchanged again. In modern fire stations there are often rooms that are only entered with "clean" clothing and those that are entered with dirty emergency clothing. Ideally, the changing area has a direct transition, which you can then cover "unclothed" and where there are often showers. This separation is intended to prevent contamination from being carried over. In Germany this is also known as the “ black and white separation ”.

As a rule, the employees are already wearing uniforms and the vehicles are permanently assigned. The rest of the operational clothing is in close proximity to the respective vehicle and is quickly put on when an alarm is triggered. In order to prevent the contamination from being spread after a mission, these guards often have a "black and white" changing area.

Lounge and relaxation rooms for the guard department

Since full-time manned fire brigades, professional and plant fire brigades have to be on call at all times, a guard department is on constant alert . During normal working hours, the employees carry out maintenance, repair and other work at the fire station. After this working time you are in the so-called standby time . For this purpose, common and relaxation rooms must be available. The fire brigade can stay in the common rooms and pursue leisure activities. In many cases there are pool and foosball tables as well as a fitness room. There is also a kitchen and dining rooms. For the night's rest, the emergency services have quiet rooms with beds in which they can rest during the on-call time. These rooms are usually set up for two or more firefighters. In the event of an alarm, the fire fighters within a few seconds, the vehicle hall and equip there ready made.

In the respiratory protection workshop all respirators ( face masks , air tanks , filters and smoke hoods ) managed, tested, maintained and repaired. A compressor with the appropriate air capacity is available for the breathing air bottles. Depending on the model, several bottles can be refilled with filtered air at the same time on the filling bar. Special systems with a washing machine, a disinfection system and a drying cabinet are available for cleaning and disinfection . The testing of breathing apparatus and masks is carried out on test stands, some of which are PC-supported and some of which test automatically. The maintenance of the equipment is carried out by respiratory protection equipment operators . Chemical protection suits and diving equipment for fire service divers are also serviced and checked in the respiratory protection workshop.

The fire station with hose tower in Ilmenau

The hoses are filled with water before cleaning to determine whether there is any damage. The test pressures are different for the hose sizes (A, B, C, D hoses). The hoses are pretreated in a container in a water bath and then cleaned in a hose washing machine.

After washing, the hoses are hung up to dry in a hose tower . In addition, the tower can also be used for instructor and abseiling exercises. During breathing protection exercises , the tower can be used to simulate a stairwell in a high-rise building. When building new fire stations, the hose tower is often dispensed with for reasons of cost. Instead, a hose drying cabinet is used for hose drying. It is also possible to place it horizontally on brackets on a free wall, which is the cheapest solution, but not as effective.

In the meantime, in Germany, according to DIN 14092 Part 3, the tower is referred to as a fire brigade tower , as it serves other purposes in addition to hose drying.

After drying, the hoses are dusted from the inside with talcum substitute, rolled up and sorted by size and stored on shelves in the hose store. From there, they are distributed to the emergency vehicles again if necessary.

In the radio workshop , all radio devices used in the fire service (2 m and 4 m band or Tetra digital radio) and radio alarm receivers are checked and serviced.

In meeting rooms , a complete has crisis team place. In the event of major incidents , the operations command is set up here. Several telephones with their own number are available. Map material, information about all emergency vehicles and a large board are available here so that the emergency services can be coordinated.

The fire fighters are trained in the training rooms . Numerous technical devices are used for this purpose. The benches are usually arranged in such a way that an open exchange of views between the fire fighters can take place in a pleasant atmosphere.

A fire station of the FF Willich

The respiratory protection exercise facility (also called the respiratory protection route) is used in particular for stress exercises to be repeated annually and for training wearers of breathing apparatus . In the anteroom, there is usually an endless ladder, a treadmill and a hammer blow system or upper arm ergometer, on which the exertion during an operation is simulated while wearing respiratory protection. The aim of the exercise is to check the physical performance and the use of the breathing apparatus. Field exercises can also be carried out in the breathing apparatus training facility. Smoke, heat, noise, darkness and flickering light can be generated in the systems in a controlled manner in order to represent different scenarios. The exercise is carried out in a darkened and partially fogged room. The respirator wearers have to find their way around in a cage system and have to overcome various obstacles such as passages, pipes, hatches, slides or stairs. New systems are monitored by thermal or infrared cameras.

Breathing protection training systems can be found - especially in rural areas - as supra-local facilities, independent of fire stations. They can also be housed in a truck as a mobile exercise facility.

In the meantime, more and more fire brigades are equipping themselves with fitness rooms so that physical performance can be optimized. These rooms are used in addition to sports fields and sports halls as part of fire fighting .

An administrative wing is essential, especially for professional fire brigades , but also for some volunteer fire brigades . The various departments are located here (e.g. personnel administration, accounting, technology department, preventive fire protection). In the offices, the data of firefighters, fire engines and devices are managed, new acquisitions are made and interviews are held. Often, authorities dealing with fire protection are also based in the fire station. Administrative rooms of higher-level structures are also arranged at central fire stations.

The guard departments supply themselves with food, so a kitchen is also part of their area.

Fire house on the practice yard of the Gelsenkirchen fire brigade

Depending on the size of the fire brigade, repairs and maintenance work of all kinds are carried out on fire engines and equipment in the vehicle workshop .

In the case of professional fire brigades in particular, the emergency vehicles at the filling station are supplied with operating materials such as diesel and petrol. The fuels for small appliances such as chain saws and power generators are also kept here. However, there is a trend towards giving up costly own petrol stations and refueling vehicles at contract petrol stations.

Practical exercises and training take place on the farm . Both underground and above-ground hydrants are available here. There is also space available to demonstrate fires or traffic accidents. On open days , the work of the fire brigade can be demonstrated to the audience. As with the vehicle shed, each vehicle in the courtyard usually has its own parking space, which should also enable it to move out quickly and safely. Practice houses can also be located on the premises of professional fire departments.

Rooms for the youth fire brigade

In many fire stations there are changing rooms with lockers as well as lounge and group rooms for the youth fire brigade or children's fire brigade . This is where the young people and children meet for their exercises and other appointments.

Combination with other community facilities

Since the fire station is a community facility, it is sometimes combined with other community facilities. The simplest case is that community apartments are also built that are made available to fire fighters. Another possibility is the design as a security center, in which the rescue service or the police are also housed. A fire, civil, disaster control and rescue center is also common in large cities . In small communities, the fire station is occasionally housed together with the community office in the community center. In Austria it is also run as part of a security center.