For a long time and in some cases beyond the turn of the millennium, telephone operators were mainly active in the operation of large telephone systems in companies, authorities and public institutions, whose tasks later mainly lay at the interface between internal and external connections. They took external calls at answering stations and forwarded them to the desired extension, set up exchange connections for half-office and non-full-office authorized extensions - mostly with simultaneous checking of the subscriber's authorization - and functioned to a limited extent as an information desk.

Until the late 1970s, telephone systems were mechanically built in an open frame design, and then also in metal cabinets. They essentially consisted of rotary dials and rotary dials , which had various tasks (call seekers, group dialers , line dialers ) as well as subscriber circuits, exchange transfers and an operator station. A special type of telephone system were the series systems , which did not have any automatic switching devices.

Coordinate switch systems such as the MSN 70 were used for a relatively short time, but these were only established in the GDR for small systems. In the FRG and other western countries, coupling fields were built very quickly with ESK relays , which, depending on the system, were more or less electronically controlled.

These were replaced in the 1980s by fully digitized systems, the basic functional component of which was a switching network and whose input and output lines were switched by a control unit . The family telephone system was a telecommunications solution that was offered to private households by the Deutsche Bundespost in the 1980s.

From the year 2000, more and more fully IP-based solutions were used, and with it the move away from line switching to pure packet switching of digitized voice data. 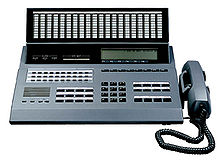 Inquiry point of a telephone system

The advantages of a telephone system are the free internal calls between the connected end devices as well as the better utilization of chargeable exchange connections, since not every end device has to have its own subscriber line . Further advantages are the additional own performance features such as the forwarding of telephone calls , toggling , call diversion or the rattle circuit . Often there is a so-called inquiry station at which a central call is accepted and passed on to the appropriate person.

In addition to the automatic switching, a telephone system for analog connections contains a ringing current generator, which generates the ringing voltage , as well as tone generators, which generate the signal tones such as the free signal or the busy signal for the caller. The ringing voltage is usually around 48 to 60 volts at 50 Hertz (which, for the sake of simplicity, is generated directly from the AC mains voltage with a separate transformer winding).

A telephone system often provides data for billing telephone calls. To do this, it usually logs the times and numbers of outgoing and incoming calls. It usually also controls which calls can be made from individual extensions and to what extent extensions can be reached from outside.

Switching between the internal connection set (for internal calls) and the exchange rate (for external calls, so-called exchange calls) is accompanied by the seizure of an exchange line, which is also referred to as an exchange line . The outside line is usually obtained using one or more traffic elimination digits , the so-called outside line codes . In Germany and also in other countries this is usually the "0". Occasionally - especially with smaller telephone systems - the outside line was also obtained by pressing the earth button . Like all other types of inquiry buttons , these were also used to switch between the internal connection set and the exchange rate for inquiries and to switch calls internally.

With modern computer-based telephone systems, such rights can be assigned to the individual subscriber lines in a significantly more differentiated manner.

Another possibility to use a telephone system is the pharmacy connection .

A telephone system is connected to the public telephone network via classic analogue telephone connections POTS and / or ISDN , and cellular connections via gateways are also standard today.

A telephone system has digital and / or analog connection options, so-called ports, for the end devices . Depending on the type of telephone system, end devices can be connected by cable or wirelessly ( mobile extension ) - usually according to the DECT standard.

As a rule, the end devices and the telephone system are spatially separated and therefore connected to one another via suitable installation cables ( e.g. telephone cables , twisted pair cables ) or via radio distribution networks (e.g. DECT ). When connecting via cables, distributors with connection terminals are mostly used, or the connection is made via structured cabling .

Several telephone systems can be networked with one another and form a corporate network . Networking usually takes place via a (also virtual) dedicated line . Dial-up lines or directional radio are also possible, but are used less often. System-specific communication protocols are usually used in telephone systems from the same manufacturer to control the establishment and termination of connections and the transmission of the useful signals. To network telephone systems from different manufacturers, a protocol must be used that both systems can handle. As a rule, the standardized QSIG protocol (signaling at the Q reference point) is used, which is supported by almost all manufacturers. However, some manufacturers also offer proprietary protocols in order to be able to map extended system-specific functions, for example CorNet from Siemens , ABC-F from Alcatel-Lucent or the manufacturer-independent DPNSS .

In the past few years, telephone systems with LAN connections, both for the use of IP telephony as system-internal end devices and for networking several private branch exchanges via the Internet , have gained popularity.

Such solutions differ from classic proprietary solutions, for example, in that they are more open and compatible with regard to components such as servers , operating systems , protocols and telephone terminals.

Specifically, this means z. For example, modern telephone system software can run on commercially available servers on which Linux or Windows servers are used as the operating system. Such systems then communicate internally, to the telephone devices and to the exchange connection , for example via VoIP ( SIP protocol), so that commercially available SIP telephones can then also be connected. Do you want z. B. be connected at the office via ISDN ( basic connection or primary rate connection ) and / or connect ISDN and analog telephone terminals , then corresponding VoIP gateways are used.

The advantages for the customer company lie in the amalgamation of IT and telecommunications system administration , investment protection through the independence of the individual components from one another, and often the increased flexibility of a software-based system.

Difference between the US and Europe 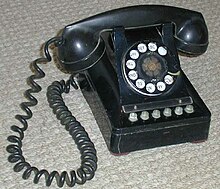 Telephone systems in the USA follow the philosophy of several shared lines (often heard in US films: "The conversation is on line 1"), in Europe, however, the switching approach based on the end device is in the foreground ("I connect [you]" ).

Instead of telephone system , other terms are also used: