POTS is a redirect to this article. Further meanings are listed under POTS (disambiguation) .

POTS is a retronym that has become the term for the analog telephone service . This is not to be confused with an analog subscriber line that is connected to a fully digital telephone network .

The abbreviation POTS is derived from the English “ P lain o ld t elephone s ervice” (“simple old telephone service”, translated about “the good old telephone service” ). This joke name was originally synonymous with the PSTN ( P ublic s witched t elephone n etwork; English for: public telephony switching networks ), which emerged from the "Post Office Telephone Service" ( telecommunications service of the Post ). However, the term PSTN also fits the newer digitized telephone networks enriched with extended service features, so that a formulation emerged that only describes the service features ("services") that could also be provided by the old analog telephone service.

Connections in the POTS 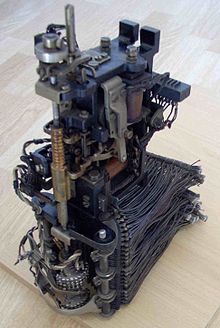 Transfer element of a  rotary dial according to Strowger

The connections in POTS (Plain Old Telephone Service) can be distinguished from other forms of telecommunications service in their characteristic service features.

The service features of POTS were achieved in the first analog sub-networks by switching a direct electrical connection between the subscribers, in which an electrical bridge was set at switching points between two telephone cables that are connected to a switching element. The direct wire was set up undivided for each connection, but the attenuation of the material was only tailored to suitability in the frequency range of the language, so that multiple use was tightly limited. Other forms of application such as teleprinter regularly had their own line networks with their own coordination and suitable switching elements that were not used for POTS connections.

The increasing distance between the participants and the supra-local interconnection of the sub-networks soon required the use of amplifiers . The terminals were now galvanically separated from each other ; the direct wire was replaced by a signaling channel .

The subnetworks for POTS connections, which are often run in parallel, and services that have to be distinguished from them gave the impetus to merge these into an integrated telecommunications service with jointly usable line networks. The possibilities of digitizing the switching nodes and digitized signal transmission reached the telephone networks in the 1970s and ultimately led to the creation of an international standard for an integrated services digital network , ISDN for short, in 1980 .

ISDN integrates POTS using transparent connection channels. A sampling rate of 8 kHz digitizes the voice band, the sampling steps are transmitted individually as bytes (with 8 bits). The switched digital connection can also be used for other data (8 kHz × 8 bit = 64 kbit / s). The dialing procedures ( multi-frequency dialing and pulse dialing ) for establishing the connection remain the same for the subscriber.

It is possible to connect analog subnetworks to an ISDN exchange through digitization. In this way, an analog network can be digitized step by step. By integrating the POTS service features in ISDN, a subscriber circuit can continue to provide analog connection lines (for conventional analog terminals ) that behave identically to the “good old telephone service”. In Germany, the public telephone networks have no longer had any analog subnetworks since digitization was completed in autumn 1997.

A number of extended switching-related performance features of the digital core network were subsequently made available for analog subscriber lines. Three-party conferences ( 3PTY ) can be set up using special number sequences and a callback on busy ( CCBS ) can be initiated. Additional signaling (FSK signal) also made caller identification ( CLIP ) possible; However, this required (new) electronic devices for the analog telephone connection. Further service features became available, but their quality was limited - for example, there are no special operating elements for controlling the voice mailbox, the speed dial list or received SMS short messages on analogue terminals; however, control is basically possible via speech synthesis of the responsible elements of the intelligent network (IN) . As a result of these expansions, today's analog subscriber connection on the digital core network is no longer identical in its scope of services to the connections on old, fully analog telephone networks, which were the basis of the POTS terminology.