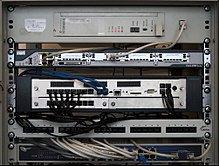 End point of a 2 Mbit / s standard leased line with NT2MSKU-E (above) and Cisco 2800 (second device from above).

A leased line is a permanent (permanent, so-called "dedicated") connection between two communication partners via a circuit-switched telecommunication network. In contrast to this, with a dial-up line, the connection is temporarily established and cleared by means of a dialing process.

All types of data can be transmitted via the connection, for example analog (e.g. telephone conversation ) or digital (e.g. direct data connection). The connection itself can be carried out physically, e.g. B. as a copper wire pair from terminal to terminal, or virtually, as part of a higher-level infrastructure such as SDH or ATM - Virtual Circuit . The connection of a permanent data line is bit transparent .

The term leased line is sometimes used to designate a long-term connection of any type and quality. The simplest form of such a dedicated line (not switched by the provider) is a permanently established dial-up line via the telephone network. Here the modems of the participants are programmed so that they dial one another.

Originally, a dedicated line was actually implemented as a wire connection that was switched between the two end points. In the meantime, however, intelligent multiplex systems are used for this , which can be flexibly switched and managed by the network operator from a central network management system.

Most of the leased lines installed in Germany on copper lines have data transmission rates of up to 2 Mbit / s. The double copper wires of the fixed network are usually sufficient for these connections . In the past, coaxial cables were often used for higher bandwidths ; these are now increasingly being replaced by optical fibers .

Leased lines on fiber optic cables are only offered with bandwidth restrictions by some network operators. For example, For example, Deutsche Telekom offers a dedicated line with data transfer rates of up to 100 Mbit / s that can be scaled in steps of 10 Mbit / s under the name DDV-M Ethernet100 .

Since around 2004, alternative network operators have been increasingly entering the German market that offer fiber optic cables (or a WDM band of a fiber) without bandwidth or usage restrictions. This connection is known as dark fiber because the customer himself has to provide the "light" on the line.

With political support among other things, the nationwide fiber optic expansion has been driven by all relevant network operators since 2017. This expansion is accelerated by means of the new micro trenching process, as the trenches required for laying fiber optic cables only have to be 15 to 20 cm wide. Large openings in sidewalks are therefore no longer necessary.

As a rule, the dedicated line is rented. The price depends, among other things, on the length of the line, the gross data rate provided and the line medium. In addition, there may be costs for data volume with bundled offers .

The technical properties of the dedicated lines, especially the quality requirements such as reliability and bit error frequency , are defined in Germany by the responsible federal authority, the Federal Network Agency (formerly the regulatory authority for telecommunications and post ). If dedicated lines are implemented via fiber optic connections, one can assume a particularly low error rate in the physical layer . Important dedicated lines can be additionally protected by preparing alternative channels (see Protection ). 98.5% annual availability is typical for copper cables, 99.5% for fiber optics. However, these availabilities result primarily from the recovery times in the event of a complete failure of a connection and less from sporadic bit errors.

Leased line to the Internet