The title of this article is ambiguous. Further meanings are listed under Münchehofe (disambiguation) .

Münchehofe ( Michow in Lower Sorbian ) is a municipality on the eastern edge of the Dahme-Spreewald district in Brandenburg . It is administered by the Schenkenländchen Office.

The community is located on the border with the Oder-Spree district , about 25 kilometers north of the district town of Lübben (Spreewald) and about 20 kilometers southeast of Königs Wusterhausen . 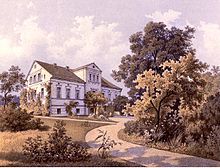 Birkholz and Hermsdorf were incorporated into Münchehofe on April 1, 1974.

The area around today's Münchehofe was populated by a few Suebi at the time of the Teutons , as a few finds from a former hunting camp of this tribe show. The first traces of settlement were found - as in the entire region - from the Wends and Sorbs , that is, from Slavic tribes who cultivated and raised cattle . For several centuries they lived peacefully with the remaining Germans in the same settlement area. However, from the 9th to the 12th century, the expansion of the area led to increased armed conflicts. German feudal lords conquered the area and settled craftsmen and merchants from their home regions west of the Elbe . It is believed that this is how the village of Münchehofe was founded.

One of the first written references of the place can be found in the Meissen diocese parish registers of 1346. Cistercian from the monastery Dobrilugk in today's Doberlug-Kirchhain used the area as a farm and operated in agriculture and fish farming. They were probably also the ones who laid the foundation for building the church . During this time, a von Langen family was first mentioned in the place : In 1328 Günther von Langen bought some land in the area. In another document from 1462 the settlement is called "Monchhoffe" and thus alludes to its monastic origins. It is known from 1464 that the family acquired the rights to Münchehofe. In 1507 these passed to the Nickel and Georg von Langen brothers. In 1518 a "Möller zu Mönchofe" is mentioned for the first time in the Storkow register of inheritance. It can therefore be assumed that grain was already being milled in the community at this time. Further mentions can be found in the years 1600, 1692 and 1695. After that, the residents practiced agriculture, sheep breeding and won firewood. Viticulture was also practiced to a small extent. In 1575 there are mentioned 11 farmers and 15 cottagers. In 1518 another resident of the von Langen family, Georg von Langen, has been handed down; 1599 a nickel from Langen. An epitaph of him is still preserved on the Münchehofer village church. Due to their lavish lifestyle, however, the family could not keep the estate and had to cede it to Ulrich Gottfried von Woltersdorf in 1692. This sold Münchehofe in 1698 to Georg Rudolf Freiherr von Schwinitz, the canon of Magdeburg , who in turn sold it to a Herr von Walther and Croneck.

In the second half of the 17th century, the two-story mansion was built, which is still preserved today. Caspar E. von Plathen has been handed down as the owner in 1716. In 1723, the chamber judge extended the brick building by two side wings, which were used as farm buildings. Further alterations were made in the 19th century, such as a late Gothic chapel with a two- bay star vault .

In 1701, Münchehofe came into the possession of Heinrich Wilhelm von Goertz, a colonel in a Swedish dragoon regiment . He signed it over to Friedrich Kühlwein as Leibgedinge in order to secure his daughter Johanna Auguste after the marriage. Gradually, he acquired other lands such as the neighboring Hermsdorf and the village of Birkholz from the Langen family. With the expansion of the congregation, the church was expanded in 1707. During this time, the first village school, which is said to have been in the house of cooper Robert Becker, was built. Von Goertz did not have the necessary financial means for the purchase, but he hoped to capture them in the upcoming campaigns. He therefore asked the Prussian court for a loan to buy the land. It has been handed down that von Goertz proceeded with great severity against the population. He was therefore from the Swedish King Charles XII. arrested and died of violence during the subsequent questioning by the king. The "soldier king" Friedrich Wilhelm I took over Münchehofe due to the open bond. So the community came into the possession of the Prussian state. During excavations in the church in 1988, among other things, some bones were found that are attributed to Colonel von Goertz. A memorial stone in the cemetery today commemorates him. In the decades that followed, tenants worked in the estate until 1945, paying taxes to the Prussian state.

There is evidence of a brick barn in 1745. In the years 1745 and 1755 a windmill is mentioned on the Mühlenberg. During this time the church tower collapsed and had to be removed. Distillation was introduced at the end of the 18th century .

During the Silesian Wars the community came under Saxon rule . Both the First Silesian War and the Seven Years' War put a heavy burden on the place: There were sieges and looting by Austrian and Russian troops, which only ended with the Treaty of Hubertusburg in 1763. The community suffered further victims in the Wars of Liberation , in which 11 soldiers from the parish died. In the German-French War fell another three soldiers of the community.

20th century to the present

In 1911 the school building was rebuilt and inaugurated in 1913. The First World War initially brought only a few negative effects for the community. With the expansion of the fighting, Münchehofe was also increasingly affected; a total of 21 soldiers from the community died. A memorial erected in 1998 commemorates the victims of this war. In 1926 the church received a new bell. In 1927 the fire station was rebuilt on Schweriner Strasse. Two years later, the volunteer fire brigade was founded under the direction of the district fire chief Weber. The memorial documents the names of 30 fallen in World War II .

After the end of the war, refugees settled in the community area, which led to an expansion of the community. By order of the Soviet commander, potato schnapps was produced again until 1953. Up to 500 hl should be produced per quarter . School operations were resumed in 1948. Two years later, the kindergarten was set up in the mansion, which was no longer in use. In 1968 the church was completely renovated, and an electric drive was installed for the organ's bellows. A year later the village schools were closed. The Münchehofe sports club was founded in 1974 and the Münchehofe village club five years later. The village library was established in 1981. This was replaced in 1990 by a mobile library from the district. A local group of the association of allotment gardeners, settlers and small animal breeders was founded in 1984. A year later, the construction of a youth club began, which was inaugurated in 1986. From August 23 to 25, 1996, the community celebrated its 650th anniversary. On the occasion of the 660th anniversary, an extensive chronicle of the community was created.

The Münchehofe community council consists of eight community representatives and the honorary mayor.

Irmscher was elected in the mayoral election on May 26, 2019 with 75.1% of the valid votes for a further term of five years.

Blazon : “In green a pointed-gable silver bell tower decorated with a cross on top, in it a round-arched opening with a gold bell on the black bell cage above a three-pass rosette; top right side by a golden birch leaf and left by a golden mill wheel. "

Münchehofe's partner location is Münchehof am Harz in Lower Saxony .