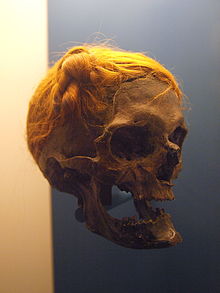 Suebi knot on the head of Osterby's bog body

The Roman Empire under Hadrian (reign 117-138 AD). The settlement area of ​​the Suebi is bordered by the Elbe and Oder as well as by the southern Baltic Sea coast and the Ore Mountains.

The term Suebi ( Latin : Suebi , Suabi or Suevi ) refers to a Germanic tribal group that once lived in the northeast of the Germania magna on the Baltic Sea as far as the German low mountain ranges. In Roman sources, the Baltic Sea was named " Mare Suebicum " after the Suebi . The ancient geographer Claudius Ptolemy (* around 100, † around 175) located the river Συήβος ( Syebos , Latin: Suevus ) in his Geographike Hyphegesis at the site of today's Swine and Oder . This means that the tribal name Suebi can be interpreted as the “Oder People” or the river name Suevus as the “Suebi River”, matching the original settlement area .

As the historian Reinhard Wenskus has pointed out, the tradition and appearance of the Suebi initially shaped the ethnographic perception and description of numerous Germanic tribes in the ancient world, before this dominance passed to the Gothic tribes . Many Germanic tribes made a point of being considered Suebi.

Etymologically, the later name of the Swabians is derived from the word "Suebi" . At the time of Tacitus , tribes designated as Suebian were the Semnones , Marcomanni , Hermundurs , Quads and Longobards , sometimes the fishing rods are also included. Archaeologically, they are most likely to be found in the Elbe Germans .

In the sources the trace of the Suebi is lost in the 2nd century before their name appears again in later sources. They took part in the so-called Great Migration and parts of them reached the Iberian Peninsula .

Tacitus testifies in Germania that the Semnones were considered to be the original people of the Suebi, vetustissimi Sueborum .

Julius Caesar defeated the Suebi, who invaded Gaul under the leadership of Ariovistus, in 58 BC. In a battle on the Rhine . In his reports he understands the Germanic tribes to the east of the Ubier and Sigambrer as Suebi and reports that they counted 100 districts , each with 1000 arguing men, but when he crossed the Rhine they moved far to the Bacenis forest (the German low mountain range, which, after Caesar, the Suebi of separated the Cheruscans ), would have withdrawn. However, this localization is considered unsafe. They are said not to have had permanent residences, but to have moved out annually in part on military ventures. The size of the Suebi tribal association is probably mostly due to a self-classification of other tribes due to the war fame of the Suebi. In any case, Cassius Dio reports that "many others also lay claim to the term 'Suebi'".

However, according to the archaeological sources, there were permanent settlements on the Main and north of it, even Celtic Oppida were settled in this area shortly after the Germanic immigration. These so-called Mainsueben , the 10/9 BC BC by Drusus belonged, according to the finds, to a mixture of the Elbe Germanic and the Rhine Weser Germanic culture area.

According to inscriptions found, the Suebi Nicrenses, the Neckarsueben , lived in the area of Lopodunum (today Ladenburg ) in the 1st and 2nd centuries AD under Roman rule. The Civitas Ulpia Sueborum Nicretum in the Ladenburg area was named after them. These are probably remnants that remained here and in Diersheim after the expulsion or voluntary or compulsory resettlement . In the late antique Tabula Peutingeriana , a Roman road map, the name Suevia is entered between Alamannia and the Burcturi (= Brukterer ) , which probably refers to the settlement area of ​​the Neckarsueben.

According to the 38th chapter of Tacitus' Germania from AD 98, all Elbe and East Germanic tribes south of the Mare Suebicum ( Baltic Sea ) between the Elbe and the Vistula (from the Danube to the Baltic Sea) belonged to the Suebi tribal union . He counted the Semnones , Lombards , Reudigner , Avionen , Anglier , Variner , Suardonen , Nuitonen , Hermunduri , Naristen , Marcomanni , Quadi , Marsigner , Burer and Lugier to them. The Hermundures were the “foremost”, the Semnones as the “noblest, most respected and oldest” and the Lombards as the boldest of the Suebi peoples. In the introduction to his writing, Tacitus mentions that the Suebi possibly descended directly from Mannus , the progenitor of all Teutons and son of the god Tuisto, who was born out of the earth .

Ptolemy describes the Suebi around 150 AD as a collective term for many tribes in Germania magna . To the Sueboi he counts Angilers , Semnones , great Brukterer , Angrivarians and Teutonoaren (on the Lower Elbe ). He also called a river Syebos between the Oder and the Jutian peninsula .

Suebi in the northwest of the Iberian Peninsula

Map of the conquests of Hermerich and Rechila (411–448).
→ Main article : Kingdom of the Suebi

On December 31, 406, a tribe or warrior association called Suebi , accompanied by vandals and Alans , among others , crossed the Rhine at Mogontiacum (Mainz) ( Rhine crossing from 406 ). The warriors first sacked Gaul and then invaded Hispania in 409 . Here they were allegedly allotted the province of Gallaecia by lot . They built their first residence in Braga (lat. Bracara). After they also took over the northern settlement area of ​​the Vandal Hasdingen in Galicia, a second residence was set up in A Coruña (Latin Corunium) with the Flavium Brigantium. About the exact origin of this Suebi group, which was finally subjugated by the Visigoths in 585 , can only be speculated. Most likely the Donausueben or Quads come into consideration. The Sueb Empire in Galicia skillfully cooperated alternately with Visigoths and the Western Roman Empire, always sticking to the currently stronger one and often gaining independence through marriage policies. To consider it as a Gothic vassal would therefore be too short-sighted.

The first Suebian king or rex on the Iberian Peninsula was Hermerich († 440), who defeated the Vandals in the north around 430 and was thus able to expand his territory to the north-west of Galicia. His son Rechila (440–448) conquered Baetica, which was loosely controlled by vandals against Visigoths, with Seville in southern Iberia. The western areas of the Alans also became part of the Suebian Empire. His Catholic son and successor, Rechiar , continued to expand, establishing long-standing friendships with the Bagauden , through which he temporarily gained new territories in the west. But in 456 he lost battle and life against the Visigoth rex Theodoric II on the river Órbigo near today's Astorga . With that, most of the Suebi conquests outside of Gallaecia were lost. The northwestern Sueben appointed then Maldras (456-460), presumably from alanischem needle coming, their leader, while in the capital Braga succession Aiulf (456-457) and Framta (457-458), probably a Visigoth nephew of Theodoric I. , ruled in Visigothic dependence. After Framta's death, the Suebi Rechimund or Remismund (according to tradition, Maldra's son, probably his son-in-law) took control of the Suebi, where he enjoyed the support of the army master Ricimer . Remismund expanded more or less with the approval of the Visigoths and conquered Conimbriga and founded Coimbra. Lisbon, too, preferred to surrender to the Suebi rather than the Visigoths. Remismund, who meanwhile ruled the west of Iberia again, had to accept Arian Christianity again at Eurich's request . The reason for this were political agreements between Eurich and the army master Ricimer, which led to the death of Anthemius and his son Anthemiolus , but also to the formal recognition of the subordinate rule in Galicia by the Visigoths.

No sources have been preserved for the next 100 years or so. It was not until 550 that some Ostrogothic-sounding names such as Veremund, Theodemund, Chararic and Ariamir were mentioned, but their rule cannot be verified. Around 560, Theodemir again converted from Arianism to Catholicism due to the collapse of the Ostrogothic Empire . Between 570 and 585 another four kings named Miro, Eboric, Audeca and Malaric are said to have ruled over the Suebi, which also cannot be verified. In 585 the Suebian Empire, which wanted to free itself by supporting the rebellion of the Hermenegild , was finally incorporated into the Visigothic Empire by the victorious Leovigild . This ended the Suebian rule in Galicia after 176 years.

Since the Suebi language was not written down, the known Suebi vocabulary is almost entirely limited to names and no more than a handful of terms. Some Suebi words found their way into the Galician language and Portuguese language , e.g. B. Suebian * lawerka to Portuguese and Galician laverca "Lerche".

The Quaden often appear more common than in the sources since the 5th century Suebi (archaeological designation Donausueben ). The 409 Suebi who immigrated to Iberia are also likely to have been tribal parts of the Quadi. Other parts remained in Pannonia, were allied with the Alamanni after King Hunimund's defeat in the Battle of the Bolia (469) , migrated to their settlement area and finally merged with them around 480. One speaks here of a second ethnogenesis of the Alemanni, because they were also called Suebi since the beginning of the 6th century. Nevertheless, remnants remained on the central Danube, which were subjugated around 540 by the Lombards under Wacho and then disappeared as a tribe under their own name. Jordanes still distinguished around 550 Suebi and Alamanni, where he localized the Suebi in the actual Alamannia , but the Alamanni in the Alps. The name of the Suebi has survived among the Alemanni until modern times: it was retained in what was later to become Swabia . Suebiise was an expression for "Swabian pranks" in the 19th century. It is possible that the Suebi, who settled south of the river Bode from around 570 onwards instead of the Saxons who migrated to Italy with the Longobards, were Alemanni.

According to Tacitus, the cult of the Nerthus was particularly widespread among the northern Suebi. Tacitus also reports of a sacred grove in the land of the Semnones . The peculiar hairstyle , the Suebi knot , which distinguished the free from the slaves and the rest of the Teutons, is known. Presumably it was not only the Suebi who wore this hairstyle. In Martial's epigrams it says: "The Sugambrers came with their hair braided into knots ". 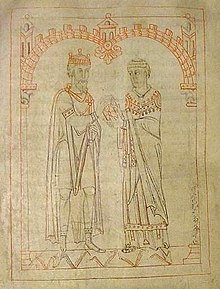 Martin of Braga converted the Suebi king Miro to Catholicism