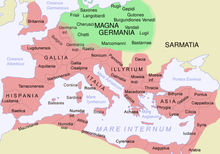 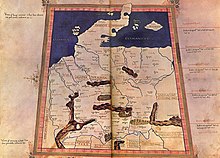 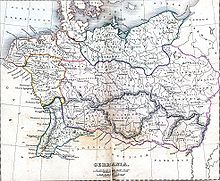 The Germania magna ( Latin for “Great Germania”) was known in antiquity as the part of the Germanic settlement area known to the Roman Empire , but only temporarily and partially occupied . In his Geographike , Ptolemy names the Rhine (Rhenus) in the west, the Danube (Danubius) in the south, the sea (Germanicus Oceanus) in the north and the Vistula (Vistula) and the Carpathians (Sarmatici montes) in the east as the boundaries of the area . The term Germania libera ("free Germania") is sometimes used, but this term is not found in ancient sources.

Since Caesar, the Romans considered the Rhine to be the border between Gaul and Germania, although Celts lived on both sides of the river. The intention of the first Roman emperor Augustus to incorporate Germania magna as a province into the Roman empire ( Auguste Teutonic Wars ) failed as a result of the Roman defeat in the Varus Battle and the successful resistance of the Arminius coalition against attempts at reconquest in the following years ( Germanicus campaigns ). In 16 AD Tiberius (14–37 AD), the successor of Augustus, ordered the Roman troops from Germania magna behind the Rhine line. However, Rome also undertook expeditions and campaigns to Germania magna in the following decades.

Attempts to conquer, Varus battle and the consequences

Numerous attempts by the Roman Empire under Augustus to conquer the Germania magna over the Lippe (Lupia) , the Lahn (Laugona) and the Werra and to incorporate it into the empire as a Roman province were thwarted in many defensive battles. For systematic attempts at expansion of Rome and coin of talk Varus Roman cities foundations dated Waldgirmes and holders , the Roman camp Lahnau-Dorlar , Olfen , Oberaden , Anreppen , Rödgen and Hedemünden and the finds of Bentumersiel . According to some historians such as Werner Eck , Germania magna was even a regular Roman province at the turn of the ages, which was then given up again around 16 AD; but this is controversial. The failure of Rome enabled the tribes living deep in the Germania magna to have a comparatively unaffected cultural development up to the so-called migration of peoples , although in the period that followed numerous impulses emanated from the Roman area into the Germanic border area. According to the current status of the discussion, a predominantly peaceful Roman-Germanic exchange in the border area east of the Rhine and north of the Danube can be assumed.

The most important of the Roman-Germanic battles was the Varus Battle in 9 AD, in which the Cheruscan Arminius , who had previously commanded imperial auxiliaries himself as an officer, defeated three Roman legions under the general Publius Quinctilius Varus with his warriors , with the Romans doing well 20,000 men lost. The devastating defeat in the Varus Battle was reflected in the future Roman military and settlement policy in this geographical area. Roman settlement policy in Germania only took place on this side or in the immediate vicinity (Taunus, Wetterau, Decumates agri ) of the imperial border on the Rhine and Danube. Since Emperor Domitian , the Limes facilities have been used to monitor the border in times of peace. Another great campaign by Rome followed in 166 with the Marcomann War , which was carried across the Danube to Bavaria and Bohemia and ended in 180 with an armistice.

In the third quarter of the 3rd century the Romans lost the Dekumatland to the Alamanni and Dacia to the Goths . At the beginning of the 4th century, since Constantine the Great, more and more foreign warriors, mostly Teutons, were deployed in the Roman army , which led to the emergence of the foederati at the end of the 4th century , who no longer belonged to the regular imperial army, but as mercenaries fought under their own leaders.

Archaeological finds mean that the Romans sometimes penetrated very deeply into the Germania magna even after Tiberius . In 2008, in Kalefelder district Wiershausen the resin one discovered in 2000 locality as an ancient battle field with numerous Roman weapons and equipment parts from the 3rd century identified. According to media reports, the finds presented to the public in December 2008 indicate, in contrast to previous opinion, much more intensive and extensive Roman military activities east of the Rhine even after the end of the Roman operations in the Germania Magna area, i.e. after 16 AD (retreat of Germanicus ), out. It has been known for a long time, based on written sources, that Roman military operations also took place in this area in the subsequent period; should the preliminary find evaluations be confirmed, however, this would be evidence of these statements, especially since the Romans would have operated much more widely in the 3rd century than previously assumed.

In Germania Magna, some Roman camps are known that were used by the troops for a period of up to several years, for example:

The geography of Germania magna is comprehensively described in the Geographike Hyphegesis of Ptolemy around 150 AD using the geographic coordinates of the main places. A geodetic deformation analysis carried out by the Institute for Geodesy at the Technical University of Berlin as part of a project of the German Research Foundation under the direction of Dieter Lelgemann in the years 2007 to 2010 enabled many historical place names to be determined locally and assigned to today's locations.

See also: Information in the Germanic article as well as the corresponding article in the Reallexikon der Germanischen Altertumskunde .

Fortresses in the Germania Magna