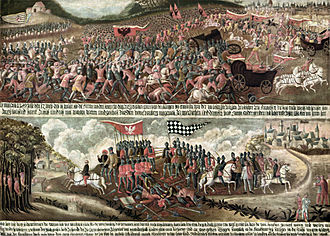 A battle ( listen to ? / I ) is the armed conflict or the engagement of two or more military parties in a conflict of decisive importance. Usually a battle is named after the location where it took place, although the battlefield can stretch for several square kilometers.

The area of ​​a combat action, be it within an exercise or within an armed conflict, is referred to as the battlefield or battle zone . The battlefield has no fixed boundaries and is usually roughly defined by those responsible for the operation.

The word “battle” is derived from the Old High German word slahta , from which the Middle High German word “slaht” emerged. The original meaning of this word was "killing", as it is received to this day in the words " slaughter, slaughter ". Only since the 16th century has it been used to describe the " battle between two armies ".

The battle as a great battle

In modern military science, a battle is that part of a military operation that encompasses the totality of the main forces of two opposing opposing force groups (usually corps , armies or army groups ). It usually consists of several individual battles of various subordinate formations that work together in the joint operation. A battle differs from a skirmish and a skirmish in its dimension and its occasionally decisive character. The term armed forces is also used synonymously .

A battle can be carried out from an attack as well as a defense operation. In battle, both sides strive to inflict a heavy defeat on the opposing forces and to hold or capture important areas.

To name the character of a battle, different starting situations or the course of battles are designated separately. A battle in the open area and after the opposing parties have been set up is also known as a field battle . A movement battle refers to a battle in which the parties fight each other out of a movement, e.g. B. both try to reach a certain geographical point first (e.g. the race to the sea in World War I ). A battle over a fortified point is often referred to as a siege (e.g. the Siege of Orléans ). A battle in which one party surprises another and they e.g. B. attacks on the march, is called an ambush (e.g. the so-called Varus Battle ). A battle in which one party surrounds the other and attacks from all sides is known as a cauldron battle or an encircling battle (e.g. the Falaise Cauldron in World War II ).

A distinction is also made between various geographical conditions between land combat , air combat , sea ​​combat and amphibious combat. In battles on land , a distinction is made between mountain fighting , jungle fighting and forest fighting as well as fighting in urban terrain. The urban and urban warfare is an act of combat.

View from the Quandtschen tobacco mill over the battlefield to Leipzig , watercolor by Ernst Wilhelm Straßberger after the Battle of the Nations near Leipzig , 1813

As a result of the clashes, death , destruction and human suffering have repeatedly taken place on the battlefields of world history . Former battlefields have engraved themselves deeply in the collective memory of the peoples affected (e.g. the Battle of Verdun in 1916 and the Battle of Stalingrad in 1942) and serve them as a place of identity regardless of victory or defeat (e.g. the defeat at Blackbird Field the Serbs). Until the Second World War, often only the victors erected heroic monuments on the battlefield (provided that it was within their sphere of influence); since then, memorials have increasingly been conceived as places of reconciliation. In the United States, for example, Battlefield Memorials enjoy a special legal status.

The battlefield and its surroundings mostly suffer collateral damage : fields , meadows and forests are devastated (see e.g. zone rouge ); surrounding settlements are damaged or destroyed; their population suffers from requisitions or looting . It used to happen after a battle that nobody cared about the burial of the fallen and that the local population took over this task.
Preserved mass graves on historical battlefields are the subject of battlefield archeology .