This article deals with the field of agriculture, for more meanings see Field (disambiguation) 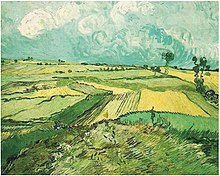 A plowed field in England

Fields near Ampleben in Lower Saxony

Harvested field with straw bales in Dienstedt in Thuringia 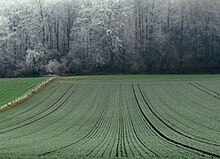 Field left and harvested in Baden-Württemberg

A field , even field or blow mentioned, is an agriculturally unused ground ( culture medium ), which regularly, for example, with a plow processed and having a crop is ordered.

The words are not to be understood completely as synonyms: One speaks of a wheat or rape field, but mostly of a potato or beet field. There are also landscape differences in the use of these words. A land used as arable land is called arable land .

The loose, worked top layer (about 30 cm) of a field enriched with organic material is referred to as arable top. In certain areas (Courland) the term was also used for the sprouting seed. The field plaice or plaice for short is actually a large piece of earth that was thrown up by the plow . The latter term is also used out of date as a metaphor for home .

The word Acker goes back to the Indo-European aĝro via Old High German ackar / acchar and initially only referred to the land outside of settlements, where the cattle were driven to pasture and also to fertilize the soil. Related to this are Swiss German Acher , Greek agros and Latin ager , which both mean field . To plow means to turn the earth, to sweep the ground , to transfer: to toil . For arable land, see also Esch (corridor) . Meadows and pastures do not belong to the arable land. The Order of the surfaces as well as occasional plow referred.

As a demarcation , Rain between surfaces naturally, difficult changeable characteristics were such. B. trees, hedges , streams , paths or artificial boundary signs such. B. ditches , piles of stones or walls , gates and fences . Also landmarks to mark the parcel boundaries were and are common.

Species and relation to the landscape

A field is a part of the agricultural area. The grain field is common . According to Alfred Helfenstein, the term field (originally a flat corridor) only referred to the grain field (not a meadow) since the beginning of the three-field economy in the Middle Ages. After the Object Browser, the authorities arable land, arable grassland, distinguish arable Hack Rain , grassland-arable and grassland hack Rain. Fields are parts of cultural landscapes .

In Germany , most of the arable land is used for plant production for food and fodder purposes , only a small part is used for growing energy crops .

Fields are subject to property tax according to § 2 GrStG . The assessment is the basis of taxation. In the context of urban planning and development at constraints farmland may land rezoned be. This often increases the price per square meter by a factor of ten or more. The resulting increase in value and the proceeds or additional proceeds that can be achieved as a result of the rededication of arable land in building land and the sale of the rededicated arable land at "building land prices" are sometimes referred to by the phrase " fifth crop rotation ".