Field path with medium vegetation in the Aare valley

A path is a connection between two geographical positions (locations) that is suitable for people, animals or vehicles to move on (or part of) it. The distance covered is called the distance traveled . Along this route, there must be both an obstacle-free space for the moving objects (people / animals / vehicles) to pass, as well as a sufficient amount of ground or medium (air, water, earth) suitable for the objects in question (e.g. B. Sufficient water depth for the draft of a ship).

A path in the narrower sense is an approximately strip-shaped connection between two geographical positions on a surface that can be walked on and / or driven on, which is suitable for people, animals or (non-track-bound) land vehicles to move on. A path in the narrower sense therefore includes connections on the ground , on bridges, walkways etc. and in tunnels, underpasses etc.

A path in the broader sense includes connections to water and air in addition to connections on land .

The paths built by people make it easier to move around (on foot or by vehicle) through otherwise mostly impassable landscapes . The path smooths or cuts through obstructive vegetation , levels bumps, bridges water surfaces or valleys with walkways or bridges and leads through mountains with tunnels . Paths remove the obstacles given by nature. The routes, which are adapted to human locomotion, serve the convenience and shorten the walking or driving time .

Paths usually run on properties that belong to different property owners. Since the use of these paths by strangers would impair the property owners' rights, the Romans already introduced a right of way. In general, right of way is understood to mean all legal norms for the construction of roads and paths , the use , dedication and designation of public and private paths. Since the separation of the legal areas , the road and right of way belong to the law of public matters , while the right of way in private law belongs to the neighboring law . It is based on the principle that paths on third-party properties can only be built and used by agreement with the property owner.

In the early days , there were initially beaten paths , the oldest type of road, for much frequented connections between places (for example between the place of residence and the hunting ground ) . With the help of tools, people turned these beaten paths into paths. A further expansion was required for handcarts and later for carts pulled by pack animals. These paths initially retained the locally existing soil type as the road surface . In ancient times , the Babylonians began around 700 BC in Mesopotamia with paving made of fired brick as a non-local road surface , which the Romans later cultivated as a mortar-like paving ( emplastrum in Latin ).

In the Frankish imperial constitution , there was a conception of public authority that differed significantly from Roman constitutional and administrative law, which also influenced the way of life. In shaping the right of way in the Franconian Empire , on the one hand the cooperative law and on the other hand the king's ban were of fundamental importance. The path within the local settlement community belonged to the common land . The three types of the king's ban, the peace, ordinance and administrative ban, also covered the streets and paths. By virtue of the ban on peace, the king took certain roads under his special protection ( Latin via regiae ). Due to his administrative ban, he is the bearer of the executive.

In the Middle Ages , road tolls ( Latin telonium viaticum ) and tolls ( Latin passagium ) resulted from property on the road . There was a compulsory road that stipulated the use of certain roads against the payment of taxes. The so-called Wegeregal ( Latin jus viae publicae regale ), which had existed since the 16th century, extended to country and military roads and included the right to raise money for their maintenance as well as the right of escort ; Customs justice was not one of them. It emerged with the strengthening of royal supremacy and imperial power and pushed back the common land that had ruled until then with equal use of roads by all citizens. On May 14, 1316, the Archbishop of Cologne, Heinrich II of Virneburg , granted the city of Xanten a toll road privilege, which was levied on every unloaded cart. On July 11, 1372, Emperor Charles IV granted a road toll for Cologne. In the early modern period, this road shelf passed to the sovereigns .

In Silesia there was a road toll regulation since August 26, 1789. One of the early laws on road construction is the Chausseebau-Edikt for the Kurmark of 1792. The right of way in the General Prussian Land Law (APL) of June 1794 comprised the state rights to dispose of the roads, possibly against compensation , their use and maintenance and traffic regulations (II 15, §§ 1 ff. APL). It even dealt with particularly piled up and stably built highways or dam roads (II 15, §§ 17 ff. APL).

Depending on who owns the paths, a distinction is made between public and private paths.

Public roads are subject to the road and right of way to the right of public matters . This means that public paths are accessible to everyone within the framework of common use . Road construction agency ( road construction and road maintenance ) is the relevant regional authority .

Private roads are used exclusively for private traffic and are located on private property. They may only be used by the owners of the property on which they are located. Strangers are only allowed to use private routes within the framework of easements or the emergency route law. The road construction load is incumbent on its owner. 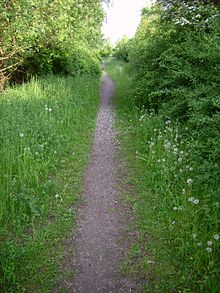 Dirt road in the Gebersack nature reserve (May 2016)

Paths can be differentiated according to use or development and are named according to regional customs. The most common types of land transport routes are:

The concept of the path can be broadly defined and differentiated and typified according to special characteristics .

Degree of expansion and partly according to historical relationships

User group, type of use

These terms are used in transferred contexts such as in transmission technology or in decisions . With regard to physical traffic routes, they are used not only for the purpose of differentiation but also for naming purposes.

When forest areas are parceled out, forestry roads are either numbered or spelled, as is the case with A-Weg, B-Weg and the following in the Dahlener and Dübener Heide . Since this scheme does not serve as a simple orientation for hikers or tourists, in some places there are second names assigned by regional organizations. The sequence of names in forest areas can be interrupted by previous clearing and can only be understood by looking at historical maps. One-letter village paths and streets can be found in Elstertrebnitz , among other places .

Paths are separated from streets by the state of development . During the paving of roads mostly from today asphalt or concrete is, point the way as covering pavement, gravel, sand or clay on. Roads are therefore built more for means of transport , paths for foot traffic (sidewalks, footpaths, farm roads ). As a legal term, traffic routes are a generic term for pedestrian or vehicle traffic (person-controlled or automated) or a combination of both for certain areas on the site. This includes in particular motorways , federal , state and local roads and railways . Traffic routes are used to effect the transport of goods , living beings (and messages) using suitable means of transport.

The word route is used in a figurative sense when traffic routes are not immediately recognizable, but only when they are used by humans or animals (see section on the carrier medium ). For directions and sequences , however, the term route is recommended .