Remains of a late medieval drive path in the Steigerwald 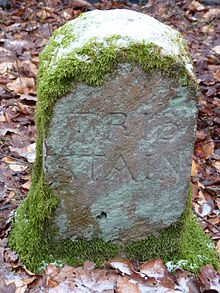 Border stone to the drive way from the 16th century

Triebweg , also Viehweg , Herdweg or Triftweg , are called ways of the cattle drive , which led from stables to pasture or to watering places or connected different pastures.

Known example is the Almauf - and -abtrieb in the Alps . There is also a network of trails in Spain . To control the herds, cattle bars , cattle gates or other cattle barriers were installed on the paths . Drive paths are also of historical importance and were delimited with drive stones in the late Middle Ages. The drive path was connected with the right to be allowed to drive cattle through foreign possessions and dominions, the path could not be left and grazing on the edges was forbidden. Traces of such drives still existing today, e.g. B. in the form of ravines are considered cultural landscape elements worthy of protection .