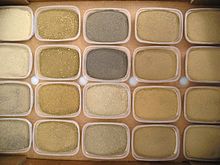 The soil type , and soil texture or grain size (engl. Soil texture called), which describes a property of soil with respect to the grain size composition of the mineral matter in the soil. Without further information, the soil type information only refers to fine soil , i.e. to mineral grains with an equivalent diameter of less than two millimeters. The coarse soil, often referred to as the soil skeleton , that is, all mineral or rock fragments with a diameter of more than two millimeters, is not taken into account; its share is only given as additional information.

The term soil type goes back to the pioneer of agricultural science Albrecht Daniel Thaer , who in the early 19th century proposed a soil classification based on the grain size proportions, which was still the basis of the Reich soil estimate in 1934 . The modern soil classifications, on the other hand, also consider soils that are not usable for agricultural purposes and are based on the soil type , the definition of which takes into account , among other things, the soil properties resulting from pedogenesis .

Soil types triangles, charts to classify the types of soil:
Links: according to the soil mapping of the Federal Institute for Geosciences and Natural Resources , 5th Edition (KA5, 2005),
right: according to the 1993 edition of the Soil Survey Manual of the United States Department of Agriculture (USDA).

In the field one can roughly estimate the soil type of a sample with the help of the finger test . The exact grain size composition, the respective proportion of the different grain fractions , is determined in the laboratory, mostly by combined sieve and sludge analysis or laser diffraction . The soil type of the sample can be precisely determined with the help of the analysis result, which can be graphically displayed in a grading curve diagram or by means of a bell curve . In Germany, this is usually done according to the classification scheme of the current edition of the Soil Science Mapping Instructions (KA5) with the help of a special diagram, the soil type triangle . Such triangular diagrams exist not only for the systematics that are common in Germany, but also for other pedological nomenclature systems.

According to the (not only) common system in Germany, four main types of soil are distinguished:

With the exception of loam, the main types of soil correspond to the finer main grain size classes according to DIN 4022 , to which the grain fractions of a sample can be assigned.

The soil type of the sample can easily be read from the percentage of its grain fractions in the soil type triangle. If the sample (or rather the at least 25% fine soil content of the same) contains, for example, 6% clay, 18% silt and - necessarily - 76% sand, according to KA5 it is a slightly loamy sand , abbreviated to Sl2 . The capital "S" in the abbreviation stands for the dominant grain fraction / main soil type sand . The small “l” takes into account the fact that clay and silt are subordinate, but occur in significant quantities together with sand in the sample, which is therefore also to be described as loamy according to KA5 . The "2" defines the proportion of the subordinate grain fractions, in this case as slightly loamy. The numbers 2, 3 and 4 (correspondingly weak , moderate and strong ) are possible here. For example, if a sample contains 27% clay, 67% silt and 6% sand, it is classified according to KA5 as a heavily silty clay , abbreviation Tu4 . In this case, the proportion of sand is too low to be classified as loamy . The extreme forms or end links at the corner points of the soil type triangle are pure clay ("clayey clay", Tt;> 65% clay, <35% silt, <35% sand), pure silt ("silty silt", Uu; <8% clay, > 80% silt, <20% sand) and pure sand ("sandy sand", Ss; <5% clay, <10% silt,> 85% sand).

The soil type is an extremely important soil characteristic for deriving ecological soil properties. Due to its grain size distribution, it determines part of the pore volume with the primary structure and thus the water storage capacity and the water conductivity (see also soil water ). It determines the nutrient and pollutant storage capacity through the grain surface and the susceptibility of the uncovered soil to erosion through the proportion of silt and fine sand .

Furthermore, the type of soil, especially the topsoil , has an impact on the agricultural workability. Sandy soils are called light soils, while clayey to loamy soils with poor aeration and rootability and high nutrient content are called heavy soils.