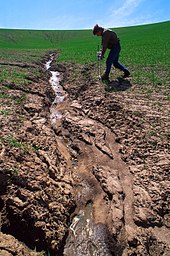 Erosion channel in a cornfield in the northwestern United States. 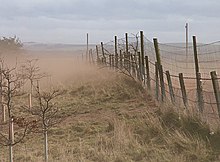 Wind blows the fine components of the topsoil in the field (right) into a neighboring tree nursery (left). Fife Peninsula, Scotland.

Soil erosion is the excessive erosion of soils , caused by improper human land use , e.g. removal of protective vegetation through overgrazing or deforestation , as well as fallow periods that are too short . The loss of the topsoil , i.e. the most fertile and agriculturally most important part of the soil , is particularly problematic .

Persistent soil erosion initially leads to a deterioration in the quality of the soil ( soil degradation ). Since 1945, the area affected by soil degradation has totaled more than 1.2 billion hectares worldwide - this corresponds to the land area shared by China and India.

The degradation can ultimately lead to the complete loss of the agricultural usability of the soil (soil evastation). It is estimated that the loss of topsoil through erosion worldwide amounts to around 23 to 26 billion tons per year (on average 14 to 16 tons per hectare per year). This corresponds to an annual loss of less than one percent of the arable land.

Soil erosion is a problem with far-reaching ecological, economic and social consequences. Therefore, various soil protection measures have been introduced around the world , which, however, have not yet completely eliminated the problem. The United States Department of Agriculture estimates that, despite the measures that have now been taken in the USA against soil erosion, millions of tons of fertile soil are washed away from farmers' fields in the Mississippi catchment into the Gulf of Mexico every year .

Soil erosion occurs mainly through runoff rainwater or through wind.

This is caused by rainwater flowing off in short-lived rivulets. Where this water collects and flows together, the concentrated runoff creates gullies , and in the case of particularly strong runoff, real gorges in the terrain. This can lead to retrograde erosion, in which a particularly steep slope or a depth line moves up the slope as erosion progresses.

In the case of particularly heavy rainfall, on a slope free of vegetation, rainwater can actually flow off over a short period of time and wash away the soil. In most cases, however, the surface erosion occurs through the interplay of small-scale linear erosion. In this way, the ground is lowered more or less evenly, unnoticed.

Heavy raindrops that hit the ground directly also play an indirect role in the washing away of the ground, as the high kinetic energy causes the fine soil constituents, which are moved over very short distances (centimeters), to clog larger pores and reduce the soil's ability to absorb water overall and thus its susceptibility to erosion increase ( siltation ).

The soil carried away by the rainwater is either flushed with the water into a nearby body of water or further down the slope, where the slope and thus the flow speed of the water decrease, deposited as an alluvial fan .

Wind erosion occurs mostly on light soils. With this form of erosion, the wind blows away the uppermost, relatively fine-grained soil layers. These are deposited again elsewhere.

caused by fast flowing water in the macropores of the subsoil, especially on steep slopes. Tunnels and sinkholes form, which make soil cultivation difficult.

When it rains, the topsoil has partly collected in the form of small sediment compartments further down the slope, a sugar beet field in the canton of Bern

Substrate and soil properties
which promote the erosion processes. As susceptible to erosion is then referred to soils if they have the following characteristics:

The degree of land cover
by vegetation or mulch determines how much surface erosive rain is exposed: 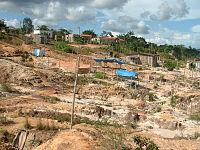 Arable use on slopes without any soil removal is not possible. A realistic goal can only be to limit soil erosion to a tolerable level. On very deep soils, soil erosion of a maximum of 10 t / ha per year (corresponding to a layer thickness of around 0.6 mm) is considered to be tolerable today. In view of the slow formation of new soil due to weathering processes, however, this value should generally be significantly lower.

In order to curb erosion on arable land, it is primarily necessary to ensure that rainwater does not collect on the surface of the soil and run off on the surface. This can be achieved by two types of measures:

The sowing in a mulch layer can be used for almost all crops. It is possible after basic tillage with and without a plow. Find cover crop for mulch preparation use, these are mostly for summer furrow ordered. The catch crop, carefully tilled after plowing, leads not only to erosion protection, but also to a reduction in nitrate discharge and stabilization of the soil structure . In favorable locations, row crops can be sown in spring without additional seedbed preparation ( mulch sowing without seedbed preparation). The method of mulch sowing with seedbed preparation is to be used when soils warm up slowly and dry out with a delay. In dry locations, the emergence of the summer catch crop is at risk if there is no rainfall. Under such site conditions, tillage without plowing with plant residues of the previous crop left on the surface or mulched in flat is a way of reducing erosion.

The following catch crops have proven their worth for mulching:

A special form of mulch cultivation is no-till farming , i.e. no-till farming . This means that the seeds are sown without tillage directly after the harvest or in the uncultivated fallow land . This form of agriculture is increasingly practiced in North America in particular. The residues of the plant material from the preculture remain as mulch on the field. Special seed drills only open narrow slots in the soil surface, which are covered with soil again after the seed has been placed. The soil only experiences mechanical interference in the actual seed rows. Various studies in the USA have shown a sometimes drastic decline in soil erosion that results from completely abandoning the plowing of arable land. For example, soil erosion fell by 75 percent on corn fields in the US state of Indiana , and by 90 percent on tobacco-growing areas in Tennessee . However, the amount of soil erosion reduction depends on the respective soil and the crops grown. However, no-till does not only have advantages and this method still needs some improvements. At least in the first time after the conversion from conventional agriculture to no-till, increased use of pesticides is necessary for various reasons .

Cultivation across the slope

In order to prevent water from flowing down the slope, cultivation should take place across the slope, ideally parallel to the contour line. This avoids the erosion-promoting lanes in the direction of the slope. If the field boundaries are redrawn as part of the land reorganization and the road and waterway network expanded, the fields should be laid out in such a way that cross-management can take place. Old arable terraces , vines and hedges are to be preserved as far as possible.

Shortening of the erosive slope length

By shortening the slope length, the flow path and thus the transport capacity of the surface water is restricted. A simple step is to subdivide a large area into two parts across the slope, which are cultivated alternately with winter and summer crops. The criterion of slope length is closely related to the question of the acceptable field size. The given location conditions and the existing structural elements essentially provide the framework. The merging of fields required by economic and technical constraints is only to be approved if the tolerable soil erosion is not exceeded as a result.

Wind erosion risk are mainly sandy, humus-rich soils, especially used for farming peat soils . The most effective protection against erosion is an evergreen plant cover. Where this is not possible, the soil must be protected from soil erosion by means of windbreaks ( hedges ). It depends on the correct structure and spacing of the protective strips. Wind protection systems not only serve to protect against erosion, they also create a growth-friendly microclimate at the same time . They reduce unproductive evaporation and offer animals and plants protection and a habitat.

In Germany, the Federal Soil Protection and Contaminated Sites Ordinance (BBodSchV), last amendment of July 31, 2009, §§ 7 and 8, in the state of Baden-Württemberg by the Ministry for Rural Areas, Food and Consumer Protection with the ordinance on the classification of agricultural Areas according to the degree of erosion risk (Erosion Protection Ordinance - ErosionsSchV) of May 29, 2010 created the legal basis for the creation and publication of cadastre for erosion risk.

Water erosion in Europe in 1993

More than half of the areas in Europe are damaged to varying degrees by water erosion. Around a fifth of the area is damaged by wind erosion, especially in Southeastern Europe . 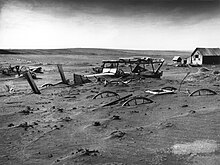 Desert scenery in South Dakota in 1936 during the Dust Bowl 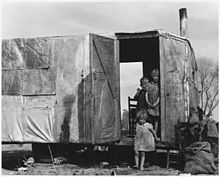 Children of a farming family from Amarillo, Texas in their poor new home in Arizona (1940)

The potential social consequences of soil erosion and the associated loss of fertile soils are illustrated by the migration movements that took place in the USA in the 1930s during the Dust Bowl and in the African Sahel zone in the 1970s and are currently taking place in the Amazon basin. The Dust Bowl states in the American Midwest take their name from major wind erosion events and the associated dust storms of the 1930s. As a result of the Dust Bowl, tens of thousands of farmers had to give up their businesses. In search of work, some of them moved as far as California , where they were housed in reception camps and exposed to exploitation and starvation. Nobel laureate in literature John Steinbeck addressed her suffering in the novel The Fruits of Wrath , which was awarded the Pulitzer Prize in 1940 . The Soil Conservation Service , the state-owned soil protection organization in the USA, was founded in response to this event and thus laid the foundation for erosion research. Based on their planning, the Great Plains Shelterbelt was created from 1935 , a 100 miles wide belt of trees from the northern to the southern border of the USA as protection against wind and excessive evaporation.

However, long before that, people repeatedly caused soil erosion through improper land use, with often serious consequences: