This article covers the spice. For other meanings, see mustard (disambiguation) . 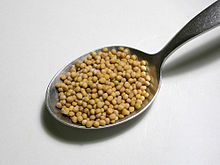 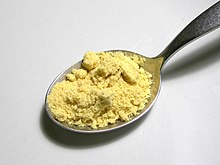 Mustard powder made from white mustard 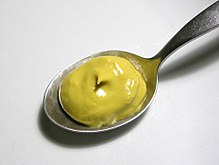 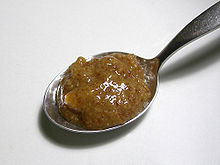 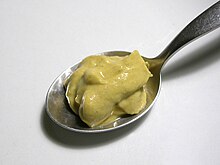 Mustard ( listening ? / I ) is a hot spice made from the seeds of white , brown and black mustard . Both pure mustard seeds (whole seeds), mustard powder (ground seeds) and, above all, the seasoning paste made from the more or less finely ground seeds and other ingredients , called "table mustard" or "mustard", are common.

The word mustard (from Middle High German sënef "mustard, mustard seeds") is a loan word from the Latin sināpi , which comes from the ancient Greek σίναπι , whose further word origin is unknown.

Mustard seeds contain around 20 to 36% nutty, mild mustard oil , 28% protein and the glycosides sinalbin ( white mustard - forms bisphenol F ) and sinigrin ( brown and black mustard ), which are responsible for the pungent taste and thus also for the appetizing and digestive effects are responsible. However, these mustard oil glycosides are not spicy themselves. The enzyme myrosinase , which is also contained in the mustard seeds, becomes active only when the seeds are crushed or ground and come into contact with liquid, converting the glycosides into glucose , hydrogen sulfate (HSO 4 - ) and sharp, tear-irritating isothiocyanates (RN = C = S), which are also often as the " fatty mustard oil" are also called " essential mustard oil". That is why mustard seeds first have a mild, nutty taste that only gains a bit more spiciness after prolonged chewing, and dry mustard powder also initially has a bland, slightly bitter, but not pungent taste. In the case of table mustard, on the other hand, isothiocyanate has already been formed through grinding and the addition of water and other ingredients, so that the sharp aroma can develop from the outset.

In addition to the different colors of the seeds, white, brown and black mustard are also characterized by different levels of heat: white mustard with the glycoside sinalbin is milder, brown and black mustard with the glycoside sinigrin are significantly hotter. The spiciness of a mustard paste can therefore be determined as desired by the mixing ratio of white and brown or black mustard. Since black mustard ( Brassica nigra ) is more difficult to harvest mechanically, only white mustard ( Sinapis alba ) and brown mustard ( Brassica juncea ) are used today.

Archaeological excavations in the Indus Valley (Indian subcontinent) have shown that mustard was grown there. This civilization existed until around 1800 BC. The first traditional recipe for mustard preparation was written by the Roman Columella in the 1st century AD. In the 8th century, mustard was first mentioned in Central Europe in a writing by Charlemagne and - spread from Arab plantations in Spain - to European countries Bars will soon become an important spice. So appointed Pope John XXII. Who exclusively in Avignon , and not in Rome resided, one of his nephews to the Grand Moutardier du Pape - the "Great papal mustard keepers".

For centuries, mustard and horseradish were the only hot spices available to European chefs and were accordingly widespread. They were later supplemented with pepper (13th century) and chili (15th century).

In medieval medicine, black mustard was mainly used for external application, with its strong circulation-promoting, pain-relieving and anti-inflammatory effects being the foreground.

The Düsseldorf ABB mustard has been produced in Germany since 1726 , making ABB mustard the oldest German mustard brand still in existence. This is produced industrially today by the Düsseldorf company Löwensenf . Traditional production can still be seen in facilities such as the mustard mill in Kleinhettstedt .

Whole white and black mustard seeds are used in cooking, frying, and marinating. The mild, nutty-tasting seeds gradually develop their sharp aroma only during cooking or pickling.

Mustard seeds from white mustard are used, for example, for pickling mustard gherkins and mixed pickles and for making sausages.

In 2018, according to the food and agriculture organization FAO, 710,349 t of mustard seeds were harvested worldwide. The largest producing countries were Nepal , Canada and Russia . The largest European producers were Russia and Ukraine .

In India , the leaves and stems of the mustard plant are cooked with onions and garlic and eaten with naan bread.

Mustard powder consists of at least 80% ground, mostly white, mustard seeds with peel (mustard flour) as well as spices, herbs and flour. It is particularly common in English cuisine . If it is not cooked, it is mixed with water to form a paste that is used in a similar way to table mustard.

Mustard powder can also be part of curry powder . 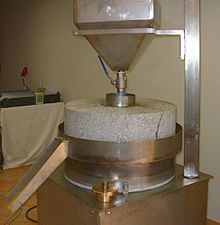 Mustard has always been made into a paste, as this is the best way to develop its spiciness. Traditionally, the mustard is mixed with grape must , which led from the Latin mustum ardens (burning must) via the old French mustard to the German name Mostrich or Mostert , which is now only used in landscapes, and the English mustard . Common basic ingredients today are mustard, water, vinegar and salt . Depending on the variety, different spices and other ingredients can also be added.

For production, the cleaned mustard seeds are first crushed between rollers and then usually de-oiled. Then the meal is mixed with the other ingredients and the resulting mash is given time to ferment - this creates the typical aroma. The pulp is then ground to a more or less smooth paste, depending on the variety. The temperature must not exceed 50 ° C in order to preserve the essential oils. In a second, historical process, the mash is ground between heavy stones, usually granite or basalt . In this so-called cold milling process, the temperature of the mass does not rise above 27 ° C. In industrial production, the mass is ground by closed, water-cooled grinders, so that no essential oils can escape and the mass is not heated above 20 ° C. After that, the mustard has to be stored for a few more hours because it is still too thin for industrial filling. It then reaches its final maturity in a glass or in a tube. Freshly bottled medium-hot mustard is still too hot and must therefore be stored for a few weeks until it has broken down and can be sold.

Table mustard is served with sausage , cured and cold meat or as a seasoning ingredient for sauces , salads , fish and vegetable dishes . Because of its flavoring and emulsifying properties , it is also used in mayonnaises and vinaigrettes .

The selection and the ratio of white to black mustard, the degree of grinding of the grains and the must or vinegar used create very different flavors and consistencies. Additional ingredients such as sugar , caramel or honey , horseradish or cayenne pepper , herbs and spices such as tarragon or cinnamon , lemon juice , wine or beer , garlic , tomatoes or paprika create additional taste nuances between sweet, mild, spicy and very hot.

In the USA , mustard is available nationwide in a uniform, rather sweet and mild flavor. Vinegar is used in the production. American mustard has a typically bright yellow color, which is achieved by adding a higher amount of turmeric than is common in Europe. However, other types of mustard, especially those traditional in Europe, can be found as imported products in most large supermarkets.

The most popular form of mustard in Germany is medium-spicy mustard , also known as delicacy mustard . It is mainly made from white and brown mustard seeds. In Austria and in parts of the eastern federal states, horseradish mustard is also popular as a variant , which also contains horseradish / horseradish or its flavor.

It corresponds to the medium hot, but contains a higher proportion of brown mustard seeds. In Austria , “spicy mustard” means the darker tarragon mustard .

The Hietzgern brothers founded a trading company in Krems an der Donau in 1819 , and in 1851 the mustard production started there. Kremser mustard is made from coarsely ground yellow and brown mustard seeds, a little sugar, unfermented wine must and wine vinegar, originally from the Krems region. The Mautner Markhof Feinkost company is now the market leader for Kremser mustard.

In Austria it is also known colloquially as "Sweet Mustard", but is spicier than "Bavarian Mustard", which is also known in Germany. Along with tarragon mustard (colloquially “spicy mustard”), it is part of the standard selection of mustard in Austrian gastronomy.

Rotisseur mustard or grainy mustard is a general name for coarsely ground mustard, which is less sensitive to heat and is therefore suitable for seasoning grilled meat and the like.

Classic Dijon mustard is finely ground and hot. One of the best-known variants is tarragon mustard . The Düsseldorf Löwensenf is also made using the Dijon process .

Traditional English mustard is a particularly hot mustard made from the flour of white and black mustard seeds. Variants contain different additional spices, but with the original, the special spiciness comes from the mustard flour and not from the additives.

Even if Mostrich is used as a synonym for all types of mustard in some regions, it is originally mustard, in which unfermented grape juice (“must”) is used instead of vinegar.

This hot, malty-brown mustard is made in Düsseldorf from brown and yellow mustard seeds and brandy vinegar according to a recipe from the 18th century.

A French variant of sweet mustard is purple mustard , which is mainly used for its color.

As a trigger for mustard energy , mustard as an ingredient in food is subject to labeling according to the European Food Information Regulation .