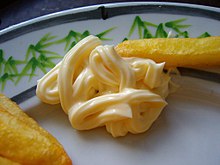 Mayonnaise ( majɔˈnɛːzə; -ˈneːzə; -ˈnɛːs (Austrian) ), also known as mayo or majo , is a thick, cold sauce based on egg yolk and oil . It is one of the five basic sauces in classic cuisine, but the only cold basic sauce; it serves as the basis for numerous derivations from other types of sauce. The base provides an emulsion of oil and lemon juice or vinegar , with the lecithin from the egg yolk serving as an emulsifier .

It is widely believed that mayonnaise has its origins in the Balearic Islands and that its name is derived from the Menorcan port city of Mahón . On June 28, 1756, the British garrison of the fortress of San Felipe surrendered to attacking French troops led by the Duke of Richelieu . To celebrate the French victory, a cold-stirred sauce was created that was still completely unknown in French cuisine at the time. Richelieu introduced the recipe in France and from there the mayonnaise was spread around the world. A variant of the theory says that mahonnese was prepared out of necessity during the siege. According to the Etymological Dictionary of the German Language , this origin is not very likely. Instead, a linguistic derivation from the French verb mailler - in German: to beat - is assumed , since the mayonnaise is whipped.

Another theory suggests that mayonnaise is derived from Catalan aioli , which is made using mortars . According to their basic recipe, finely crushed garlic with oil is whipped into an emulsion and then seasoned with salt. Aioli was first mentioned in writing in 1024.

In 1845, mayonnaise was described as follows:

“For 6–7 people, mix 5 egg yolks with ½ teaspoon salt and the juice of a larger half lemon. When everything is well mixed, add ½ liter of olive oil drop by drop while continuing to stir. It is best to beat the mass on ice with a whisk until it is very thick, which takes at least 1 hour. Finally, add 1 pinch of white pepper and ½ teaspoon of the finest English mustard. "

Real mayonnaise is based on an oil-in-water emulsion (O / W) , which is created by slowly stirring oil into egg yolk in drops. Depending on the recipe, one or more egg yolks are first mixed with salt , pepper and some liquid (water, lemon juice, vinegar), and depending on the recipe, mustard too . Oil is then added while stirring, initially drop by drop, as soon as a thickening can be determined (this has created the O / W emulsion ) in a thin stream until the desired consistency is reached. The use of roux was recommended for households as well as in large-scale production to save time and money . Such a fake mayonnaise, for example, consists of a battered dumpling to which egg yolks and oil are added.

With a modern, fast rotating hand blender , mayonnaise can be made in the kitchen in a few moments by putting all the ingredients together in a mixing bowl (first egg yolk, lastly the oil) and mixing with the mixer at high speed for about half a minute. To do this, first guide the hand blender at the bottom of the mixing beaker and slowly pull it upwards so that first a little and then more and more oil is stirred in.

This has also been introduced industrially in various forms: a declared fat content below 80 percent indicates the corresponding use of starch . In addition, industrially produced mayonnaise is made almost exclusively from pasteurized egg components, at least in German-speaking countries .

The interfacial tension of an oil-water mixture is approx. 23 m N / m . In order for a stable emulsion to be created, the interfacial tension must be reduced by adding emulsifiers, e.g. B. in the form of egg yolk, are reduced. The reason that it is still necessary to add the oil drop by drop while constantly stirring is due to the structure of the mayonnaise and the nature of the emulsifier. Because of its HLB value, lecithin favors a water-in-oil emulsion (W / O) . However, if mayonnaise is to have the desired consistency, an oil-in-water emulsion (O / W) must be formed. However, if the ingredients of mayonnaise were mixed together at once, a W / O emulsion would result due to the properties of the lecithin. In order to avoid a phase inversion, it is important to add a large excess volume of the part that is classified as a disperse phase into a mixture. In the case of mayonnaise, there is a lot of water (e.g. from the vinegar) on a little oil (a few drops). Thus, contrary to its tendency, the lecithin can create a stable O / W emulsion. The trick now consists in further "filling" the already existing disperse oil droplets with oil. From a certain volume fraction, however, an O / W emulsion produced in this way is no longer stable and breaks.

The oils contained in the egg are mainly triglycerides , which mainly consist of hydrogen and carbon atoms. So that these can mix with water, additional emulsifiers are required, which have an attractive effect on water as well as on the triglycerides and form weak bonds. Mayonnaise can achieve an oil content of up to 80 percent by adding suitable emulsifiers. Emulsifiers also prevent the oil from forming larger droplets again via the electrostatic bond: the emulsion remains. Acids such as citric or acetic acid increase this effect.

In order for the mayonnaise to be thick enough, it must be beaten vigorously. As a result, the oil droplets in the emulsion are broken up more and more. If the mayonnaise is too thick, you can add liquids such as water, vinegar, or lemon juice to loosen the emulsion again. This dilutes the disperse phase and reduces the viscosity. The amount of oil that can be added to each egg to make mayonnaise varies greatly depending on the recipe. Usually a maximum of 0.1 to 0.2 liters of oil per yolk is used to prevent the egg from clotting. The danger of this arises because the egg does not contain enough water to bind the oil in a water phase. So by adding water you can make a larger amount of mayonnaise with a single egg. By adding two to three teaspoons of water per cup of oil, up to 24 liters of mayonnaise can be made with a single egg, as the egg yolk contains a large amount of wetting agent.

The industrial production of mayonnaise takes place almost without exception using high-speed homogenizing machines, so-called combiners. Above all, gear ring dispersing machines and colloid mills are used, which work according to the rotor - stator principle. The raw emulsion is pumped through the rotor-stator system of the machine, whereby shear forces arise through pressure or violent currents , the strength of which exceeds the strength of the oil droplets, so that these are torn into the finest particles and evenly distributed in the emulsion.

Mayonnaise in bags, jars and buckets in a Latvian supermarket

In 1903 Katharina Prato also called mayonnaise “oil sauce”. Her recipe differs greatly from the older one by Henriette Davidis and the current recipe:

“You put a bowl on ice, stir 4 to 6 raw yolks and a little salt with a wooden spoon and add 15 Deka oil, 2 deciliters of cold fresh aspic and Bertram vinegar alternately drop by drop while stirring constantly . When the sauce has become thick and creamy, add a little white pepper and drop by drop the juice of a lime. They are left in the ice until they are used. "

In addition to the yellow and white mayonnaise, she knew the following variations:

Today we differentiate between the following types of industrially produced mayonnaise:

According to the "European assessment criteria for mayonnaise - Code of Practice" of the European manufacturers, it should have a minimum fat content of 70 percent. It is made with egg yolk as an emulsifier; the proportion of egg yolk should be at least 5 percent.

A mayonnaise may carry the addition of "delicacy" if it exceeds the value of conventional mayonnaises due to certain characteristics. This can e.g. B. a significantly higher proportion of egg yolk or the use of a high quality vegetable oil, such as one with a particularly high proportion of mono- or polyunsaturated fatty acids. A possible criterion can also be a particularly small diameter of the oil droplets in the O / W emulsion or the use of fresh egg instead of pasteurized egg. However, a fat content of 80 percent alone is not sufficient for declaring a product as a “delicacy” mayonnaise.

Also available in stores under the names of Salad Cream or Yogurt Salad Cream . According to the principles of the German delicatessen industry, a minimum fat content of 50 percent is sufficient. In contrast to mayonnaise, milk or vegetable proteins can also be used to partially or completely replace the egg portion for salad mayonnaise. Lecithins (E 322) obtained from soy , sunflower and rapeseed oil can also serve as emulsifiers . Furthermore, thickeners such as wheat flour, starch and gelatine are permitted. Most products contain xanthan (E 415) as a thickening agent .

There are foods that are similar in appearance, taste and structure to mayonnaise, but do not contain an egg. Concentrated soy protein or synthetic egg protein , for example, can be used as an emulsifier .

After legal disputes and pressure from the American Egg Board, the product “Just Mayo” may continue to be offered under this name in the USA if it is clearly indicated that there are no eggs, which means that it is not classic mayonnaise.