The title of this article is ambiguous. For other sauces, some of which are also called green sauce , see herb sauce 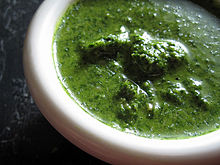 As a green sauce refers to various cold sauces of classic cuisine. Likewise, different sauces with a green color due to herbs are colloquially called so. They are known in many countries under the names such as Sauce verte ( French ), Green sauce ( English ), Salsa verde ( Italian and Spanish ) and Bagnet verd in Piedmont .

A distinction is made between the two basic variants:

Green sauce has been known in Europe for 2000 years. The recipe was adopted from the Orient by the Romans . In England, the first recipes and descriptions of greensauces are known from the De Utensilibus by Alexander Neckham from the 12th century. The German green sauces used to be intended for detoxification in spring. In 1530, a Strasbourg publisher published the cookbook “Of all dishes and dishes, cook and cellar” by Bartolomeo Platina , which contained a recipe for “Güt green Salsen von Kreuttern” ( Salse is an ancient name for sauce). In 1545 Walther Hermann Ryff recommended "for fried .... green salsen" in his "New cookbook for the sick."

Frankfurter Green Sauce ( Frankfurter : Grie Soß ) is made from finely chopped herbs. The traditional composition consists of boretsch , chervil , cress , parsley , pimpinelle , sorrel and chives , which are grown and traded in Frankfurt am Main and the surrounding area as a fresh herb mixture under the protected geographical indication (PGI) "Frankfurter Grüne Soße" / "Frankfurter Grie Soß" become. The classic recipe is the Frankfurt Sauce or Sauce Francfort, described in standard works of cooking literature, similar to a vinaigrette , in addition, numerous variants with different basic sauces or milk products are common as a base.

In northern and central Hesse , different types of green sauce are common. For Kassel or Nordhessischer green sauce (Kasselänisch "Griene Sose") are also traditionally added up to seven herbs that are chopped significantly coarse compared to the Frankfurt version. Usually these are borage, parsley, pimpinelle, sorrel and chives, depending on the variant, dill and lemon balm are added. The herbs chervil, cress or lovage are not used for the Kassel green sauce. Base material of the Kassel open sauce are a part of sour cream and two to three parts sour cream, to which the chopped herbs are added, also with chopped boiled eggs and little oil and vinegar.

In southern Hesse , a “grass-green” sauce is often preferred, for which the herbs are finely chopped in a meat grinder or mixer or with a hand blender.

The French sauce verte is a mayonnaise that is mixed with finely chopped herbs such as parsley, tarragon , chervil , watercress , pimpinelle and chives , which may have been passed through a sieve . It often contains garlic as well.

There are a variety of cold herbal sauces in Italian cuisine, the most famous of which is the pesto .

The actual salsa verde from northern Italy, which is traditionally served with bollito misto , is very similar to a Frankfurt sauce with egg and mustard, although other combinations of herbs with z. B. basil and marjoram can be used and usually contain garlic . Chopped capers are also common ingredients .

Bagnetto verde (in the Piedmontese dialect : bagnet verd ), is bound by boiled egg yolk and breadcrumbs , but most of the herbs contain only parsley leaves. The sauce is also complemented with capers, garlic and pickled anchovy fillets . Bagnet verd is one of the traditional Piedmontese foods.

Different Mexican salsas verdes in addition to the red variant

The color green is considered the most important color in the kitchen in Mexico, so there are many recipes. There are hot and sweet, cold and warm green sauces, and many dishes contain such a sauce. What is known in Germany as Königsberger Klopse is called Albóndigas en salsa verde , tastes similar but, as is often the case in Mexico, has a green sauce.

In Mexican cuisine and in Tex-Mex dishes and tacos, cold green and red spicy sauces are usually served. The version known as salsa verde contains, among other things, pureed tomatillos , serranos (chilli) or jalapeños , coriander and lime juice.