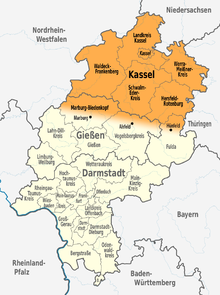 Northern Hesse based on the proposal of the Geographers' Day 1973

North Hesse refers to the northern part of the state of Hesse, its historical core area. In contrast to the name Niederhessen , the region is not a historical national name and no existing uniform and official administrative structure. However, the name is widespread and is often used today, sometimes with the purpose of deliberate delimitation from the Rhine-Main area. In Northern Hesse live over one million people, the largest city is the former Hessian capital Kassel .

North Hesse is not clearly delimited: In particular, to the south, to regional names such as Mittelhessen and Osthessen , demarcations are often contradictory. At a Geographers' Day held in Kassel in 1973, the "Festschrift" published under the title Contributions to regional studies of North Hesse , a line Marburg ( Marburg-Biedenkopf district ) - Alsfeld ( Vogelsbergkreis ) - Hünfeld ( district ) was used as an approximate southern boundary, taking into account cultural conditions Fulda and with it the northern Vorderrhön).

It is undisputed that - in addition to the independent city of Kassel - the districts of Hersfeld-Rotenburg , Kassel , Schwalm-Eder-Kreis , Waldeck-Frankenberg and Werra-Meißner-Kreis to the north of this line belong entirely to Northern Hesse.

The administrative district of Kassel and its districts

Since the region of North Hesse is not fully defined geographically, there are different political delimitations depending on the area of ​​responsibility:

Edersee and dam, view from the clock head

The rivers Werra and Fulda flow through northern Hesse , which are in Hann. Unite Münden to the Weser . A tributary of the Fulda is the Eder , which together with the Edersee forms the second largest reservoir in Germany. Other reservoirs include Diemelsee and Twistesee . 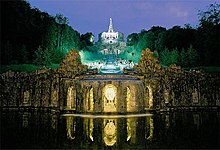 The Hercules on Wilhelmshöhe in Kassel

The monastery ruins in Bad Hersfeld

North Hesse is less populated than the Rhine-Main area and therefore below the average for the state of Hesse. The economic center is by far the Kassel region, with the city of Kassel and suburbs such as Lohfelden or Baunatal. The following cities have more than 10,000 inhabitants:

(Municipalities without city ​​rights are not listed.) 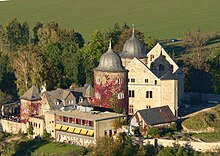 The present-day region of North Hesse historically forms the core area of ​​the later state of Hesse. It corresponds largely to the settlement of the Germanic chat ( Hessengau ), whose name by sound shift in the early Middle Ages changed to the word "Hessen".

Northern Hesse consists mainly of the historical areas of Lower Hesse , the Principality of Waldeck and parts of Upper Hesse ; Another historical description includes Northern Hesse as the former core area of ​​the Landgraviate of Hessen-Kassel and the Principality of Waldeck. After 1866, the Electorate of Hesse became part of the Prussian province of Hesse-Nassau . However, the term North Hesse is not used as a historical term for this area in the history of science. Instead, one speaks of "Hessen-Kassel" or "Kurhessen", which is still used today in terms such as " Kurhessenbahn ".

Although North Hesse is an integral part of Hesse and the local population also sees itself as Hesse, there are some cultural differences, probably due to the various Hessian states in German history. In contrast to the rest of Hesse, there is a certain orientation towards the old royal seat of Kassel and not towards the metropolitan area around Frankfurt.

In culinary terms, North Hesse is known for the specialties “ Ahle Wurscht ” and “ Weckewerk ”, the “ Green Sauce ” with its seven secrets is also prepared a little differently than in the south of the state. Architecturally, the frequent use of the framework is striking; In addition to numerous residential buildings, there are also many churches and other buildings of this architectural style in North Hesse: for example, the house at Marställer Platz 7 , the last half-timbered house in Kassel's old town, the Jewish house in Wanfried, the wedding house in Fritzlar , the Homberg local history museum or the 10th -towered town hall in Frankenberg.

The Kassel region, in which industrialization only began with the connection to the railroad around 1850, was traditionally due to its rapidly growing companies in the field of locomotive and wagon construction, such as Henschel (a successor company manufactured the Transrapid ), Credé and Wegmann, later characterized by machine and vehicle construction with the canalization of industry between the First and Second World War with Fieseler and after the seizure of power by the National Socialists by the switch to armaments production with Rheinstahl and Krauss-Maffei Wegmann . In this context there is today the Volkswagen plant in Kassel in Baunatal, Daimler AG plant in Kassel and Bombardier Transportation plant in Kassel. Historically, however, there was a strong textile and weaving industry with the companies Gottschalk & Co and Salzmann & Comp. and, since the 1920s, the ENKA spin fiber for chemical yarns. Due to the geographic location and the good infrastructure, however, other industries have grown since the restructuring through global investment orientations and capital concentration, including logistics. This is how the Baunatal Genuine Parts Center of Volkswagen AG was created, Europe's largest spare parts warehouse in North Hesse, which is networked by Volkswagen Genuine Parts Logistics , and the Amazon.de logistics center in Bad Hersfeld. Most of the companies in the commercial areas jointly developed by the city and the district of Kassel are located in this area.

Renewable energies are a growth sector in the region, benefiting from the University of Kassel's early focus on the environmental sector and the corresponding Fraunhofer research institutes , such as the Center for Environmentally Conscious Building. V. (ZUB). In addition, there were successful research spin-offs within the framework of the ISET - Institute for Solar Energy Supply Technology . The company SMA Solartechnologie has developed into a prominent and innovative company in the field of environmental and energy control technology.

Mining has been practiced in Hessen for centuries . In the 21st century, 283 companies are still under the supervision of the Hessian mining authorities. Active mining in Northern Hesse is known for potash mining in the Werra potash district as far as Fulda. The exploitation of other deposits of rock or ore such as diabase, slate, iron ore, copper, lead or even gold was largely stopped. In Northern Hesse, a number of show mines are suitable for visits and thus contribute to economic development in the regions.

Due to its historically grown importance in the railway industry, the region originally had a dense rail network, which has increasingly lost its importance as a transport network as a result of privatization since the 1990s, investments in high-speed long-distance traffic and tenders for routes in the course of Europeanization.

In the region, the North Hessian Transport Association (NVV) exists as a local transport authority and as a tariff association. The transport operators are the Kurhessenbahn , the Hessische Landesbahn and the cantus Verkehrsgesellschaft . The railway lines Bad Karlshafen – Hümme , Eschwege – Treysa and Bad Hersfeld – Treysa have been out of service for a long time. The also closed Kassel – Waldkappel railway through the Lossetal was expanded in 1997 for the purpose of integration into the Kassel tram network to Hessisch Lichtenau . The long, closed Korbach – Frankenberg railway was also reactivated in 2015 and has since again offered a continuous connection from the Waldecker Land through the Burgwald to Marburg. Three RegioTram Kassel lines use both tram tracks in Kassel and railway lines between Kassel main station and Hofgeismar - Hümme , Zierenberg or Wolfhagen and Melsungen .

The most important highways are the A 7 in north-south direction and the A 44 between Dortmund and Kassel. The continued construction of Kassel by the Lossetal and the Werra-Meissner to A 4 at Wommen is currently a transport project German Unity built.

Kassel-Calden Airport is located in the area of ​​the municipality of Calden. It had been a commercial airfield since 1970 and was converted into a regional airport by 2013.

In the decades since 1945, Northern Hesse, which was dominated by Protestants, was regarded as a social democratic stronghold, although, unlike in the Ruhr area, this political character does not primarily go back to an industrial proletariat. The Catholic enclave of Fritzlar is a Christian Democratic stronghold. The region is in contrast to the region around Fulda , the Catholic and rather conservative East Hesse. The melting of such once safe party bastions, which can be observed nationwide, has also taken place in northern Hesse in recent years. In the state elections in 2003, the CDU even won almost all direct mandates, which the SPD was able to win back almost all of them in the 2008 election.