This article deals with the district town of Korbach in the Waldeck-Frankenberg district; for other meanings see Korbach (disambiguation) .

The town of Korbach , since June 18, 2013 officially Hanseatic city of Korbach (formerly Corbach written track officially until February 1, 1935), is the county town of the district of Waldeck-Frankenberg in Hesse . 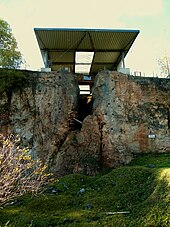 The approximately 625  m highest point of Korbacher urban area is located in the extreme northwest, on the southern flank of the already Rothaargebirge counted Widdehagen whose 635  m -reach summit, however, already in the nearby town of Diemelsee is. The town's landscape landmark, however, is the Eisenberg (560 m) west of the city center, known for its wealth of gold-bearing ores . The core city is traversed by the Kuhbach (colloquially "Die Kuhbach" ), which drains south of the city into the Itter and then via Eder and Fulda into the Weser ; the north of the city, on the other hand, drains via the Twiste to Diemel . With an old town height of 366 to 392 m. ü. NHN, Korbach is the highest district town in Hesse.

In the Korbach Column , a crevice near Korbach, there were important fossil finds from the Upper Permian . These are the only Procynosuchus finds (also called "Korbach Dachshunds") in the northern hemisphere.

Thanks to their location in the Waldeck area, which used to be rich in partridges , the town's inhabitants were given the nickname "Feldhühnerchen".

The neighboring communities of the city of Korbach are Diemelsee , Lichtenfels , Twist valley , Vöhl , Waldeck and Willingen (Upland) all in the district of Waldeck-Frankenberg and Medebach (in the Hochsauerland district in North Rhine-Westphalia )

Korbach consists of the core city and 14 other districts. In addition to the city center, only the southeastern districts of Meineringhausen, Nieder-Ense and Strothe are on the Waldecker Tafel; the rest, however, in the valleys or on the heights of the Rothaargebirge, which runs out here.

Panorama of Korbach, seen from the Eisenberg

Different views are expressed about the origin and meaning of the city name. There is agreement that the name is of Old Saxon origin. The oldest form is Curbecki (980). According to one view, the first syllable is said to have been formed from the Middle Low German "kurren, korren", which means something like the murmur of a brook. According to another opinion, the syllable "Cor" or "Cur" is derived from "Kür" and "küren", which means "choice" or "choose". Accordingly, Korbach was a chosen place on the brook, possibly also a meeting place on a brook, where the people chose a leader.

Curbechi was first mentioned in a document in 980, when the then King and later Emperor Otto II. Korbach, Lelbach, Rhena and three other places in what was then Ittergau , with Count Asicho from Ittergau and Nethegau as witnesses, in exchange for the districts of Meginrichesdorf and gave Memleben in Hassegau to the Corvey monastery . However, the first traces of settlement in the area of Kilian's Church are now dated to the time before Charlemagne , and a Saxon noble farm is said to have stood here. There are also indications of early settlements in the rest of the city. B. on the Wipperberg near Lengefeld.

In 1188, the Paderborn bishop Bernhard II granted Korbach the city charter of Soest . Due to Korbach's location at the intersection of the Heidenstrasse (Cologne – Leipzig) and Weinstrasse (Frankfurt – Bremen) trade routes , handicrafts and trade developed rapidly, and Korbach flourished. The area of ​​the (then) old town was soon no longer sufficient to accommodate all residents. The merchants therefore settled in two new cities, the upper and lower Neustadt, outside the city limits, which soon united to form a common city. In the 14th century the Kilian's Church was built in the old town and the Nikolaikirche in the new town .

Korbach - Excerpt from the Topographia Hassiae by Matthäus Merian 1655

In 1349, the knight Heinrich Megdevelt founded the first documented hospital in the city at the drinking gate leading to the Neustadt for the salvation of his and his relatives. Six poor and elderly people should live and be cared for there. The hospital was expanded in 1467 due to a foundation, subsequently renewed several times and moved to the Enser Tor in 1869 and then developed into a retirement and nursing home.

In 1349, Emperor (then still a Roman king) Charles IV visited the city. In 1377 the old and new towns were united; On the border between the two previously separated cities, the common town hall was built, which is still there today. In 1414 a double wall ring that surrounded the entire settlement was completed. Five city gates guarded the entrance to the city: the Tränketor, the Dalwigker Tor, the Enser Tor, the Lengefelder Tor and the Berndorfer Tor. Of these, only the Enser Tor remains today. The Padberg feud from 1413 to 1418 was the climax of the long border disputes and repeated attacks by the Lords of Padberg on the territory of the County of Waldeck and especially the city of Korbach. With this feud the clashes came to a temporary end.

With the Reformation , the city and the entire county of Waldeck became Protestant . Even today, Korbach is still largely Protestant, although since the 19th century more and more Catholics have moved into the city and built the two Catholic churches, the older St. Mary's Church and the modern St. Joseph's Church. In addition, the western districts on the border with North Rhine-Westphalia are almost entirely (Hillershausen) or to a large extent (Nieder-Schleidern, Eppe) Catholic.

During the Thirty Years' War Korbach repeatedly had to make high contributions to troops passing through. By the end of the war only half of the houses were still habitable and the number of residents had dropped from 2,600 to 1,100. A big fire in 1664 destroyed almost all houses; Today there is only one half-timbered house "Im Katthagen" in Korbach, which was built before this fire in 1593. The Gothic stone churches and the stone warehouses, however, have been well preserved.

During the Seven Years' War on July 10, 1760, a battle north of the city broke out near Korbach between the French and a Brunswick-Hessian-British troop.

Only towards the end of the 18th century did modest prosperity return; the city reached its first economic boom at the end of the 19th century. This was largely due to the opening of the Twist Valley Railway in 1893, which from 1897 provided a connection to Kassel with the Volkmarsen – Vellmar railway . Louis Peter , born in Alleringhausen , founder of Peters Union AG in Frankfurt am Main (formerly Mitteldeutsche Gummiwarenfabrik L. Peter AG ), built the Korbach branch in 1907. The Hanoverian Continental AG took over the Peters Union in 1929 .

The city was spared major damage in both world wars. After the Second World War , the population increased sharply due to refugees and displaced persons from the former German eastern regions .

On March 29, 1961, an Air Force F-104 “Starfighter” crashed on the outskirts, not far from the Korbach – Berndorf railway line and Flechtdorfer Strasse . People were not harmed. Pilot and observer were able to save themselves with the ejector seat. It was the first crash of a Bundeswehr F-104.

Since 1963 Korbach has had a town twinning with the French Avranches in the department of Manche . Waltershausen in Thuringia followed as another twin town after reunification in 1990 . Korbach also maintains partnerships with the Polish Pyrzyce (Pyritz) and the Czech Vysoké Mýto (Hohenmauth).

Korbach lies on the federal highways 251 ( Kassel - Brilon ) and 252 ( Marburg - Paderborn ), which briefly overlap on the Korbach bypass . There is no direct connection to the motorway network in the urban area; the next motorway connections are on the A 44 at Diemelstadt or Zierenberg , each about 30 km away. The city is also connected to Medebach and Diemelsee via state roads . 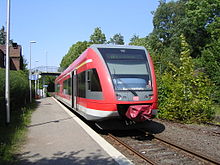 Korbach South; on the right in the bushes the former track to Bad Wildungen

The Korbach Central Station (officially designated as such since 2018) is a railway junction where three railway lines meet today: one to the northwest, which runs as the Uplandbahn via Willingen to Brilon-Wald ; one to the south, which runs via Frankenberg to Marburg ( Untere Edertalbahn and Burgwaldbahn ); and one to the northeast, which is part of the Warburg – Sarnau railway line and a branch via Volkmarsen to Kassel . A fourth route used to lead south-east via Waldeck to Wabern . It is shut down as the Ederseebahn in the Korbach− Bad Wildungen section ; The Ederseebahn cycle path , which was laid out from 2008 to 2012, is now between Korbach and Buhlen . The line to Kassel reopened on October 4, 1998 (one of the first examples of line reactivation at the time). The 31-kilometer-long Korbach – Frankenberg line was closed at the end of the 1980s. The short section from Korbach to Korbach Süd was used again on September 29, 1999. The entire Untere Edertalbahn from Korbach to Frankenberg, which also connects the Kellerwald-Edersee National Park , has been in operation again since September 11, 2015 .

Until the 1980s, there were continuous long-distance train connections to Amsterdam , Hamburg and Frankfurt am Main, among others .

Korbach has, remarkable for a city of this size, two train stations on the same railway line, both of which are in operation. In order to make the old town and the southeastern part of the city easier to reach, the “Korbach Süd” stop was built 1.5 km south of the main train station. Despite modernization measures along the railway line to Kassel, the consequences of the earlier closure are still noticeable. In addition, the route via Bad Arolsen and Volkmarsen is a considerable detour.

In 1997, a city ​​bus concept was introduced in Korbach with now five ring lines , some of which overlap . These buses run every 40 minutes and meet at the main station every 20 minutes. Important destinations such as the city center, the city hospital or the school center are connected to several lines.

There is an airfield with restaurants in Korbach . In addition to a 600 m long grass runway for sport aircraft, a 200 m long runway is available for paragliding. The airfield, one of the oldest in Germany, is a popular destination and is visited by hundreds of pilots from all over Europe every year. 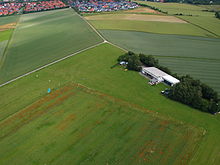 Municipalities in the Waldeck-Frankenberg district

Districts of the district town of Korbach