Pillory at the Ilmenau town hall

Pillory in front of the main portal of the Bonn Minster

The pillory, stake or kaak was a punishment tool in the form of a pillar, a wooden post or a platform on which a convict was tied up and brought before the public. Initially a torture tool and a place of corporal punishment ( stäupen ), pillory became widely used in the 13th century for the execution of honorary sentences . The pillory also served the cities as an outward sign of jurisdiction .

The punishment consisted primarily of the public disgrace which the convicted person had to endure and which in many cases made it impossible or very difficult to continue living in the community as “normal”. The punished person was also exposed to the abuse of passers-by, which was not without danger for him. Throwing objects at the person concerned and beating (Low German “kaakstreeken”, Streek = “prank” and correspondingly Danish “kagstryge”) were common. In many cities (e.g. Lübeck ), however, it was forbidden to throw solid objects at the person in the pillory (referred to here as Kaak ).

One of the last cases was probably recorded in Berlin in 1853: At the height of the reaction in Prussia, another woman was pilloried on Hausvogteiplatz for perjury :

“... when we noticed that a curious crowd of people was crowding restlessly in front of something in front of the house bailiwick. We quickened our pace and now saw a rather elderly, corpulent woman, with her hands tied on her back to a stake that read: 'Because of perjury'. It was then written in 1853. It was therefore an attempt made at the height of the reaction to reintroduce the medieval punishment of pillory. When we stood in the same place on our way back at twelve o'clock, the spectacle, which we boys were naturally very interested in, had already disappeared from the scene. The government had probably realized that after 1848 it was no longer allowed to offer Berliners something like this. "

There are different types of pillory: 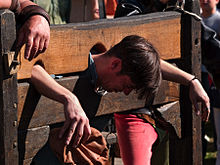 In the pillory, reenactment on a modern medieval market

The block, probably the most common form of pillory, usually consisted of two parallel boards, which were connected to one another by a hinge and attached to the end of a strong post. There were recesses in both boards for the neck and, to the left and right of them, for the wrists. The closed boards now tied the offender around the neck and hands. Equipped in this way, it was then exhibited in public places.

One of the most prominent figures in the pillory was the English writer Daniel Defoe , who was pilloried in London in 1703 for his satires. His poem Hymn to the Pillory, however, spoke to the audience so from the heart that they pelted them with flowers instead of the usual windfalls and stones, and drank to their health.

"Put in the pillory"

In a figurative sense, "to pillory" means to publicly expose someone quasi-institutionally. The National Socialists used the term, for example, in their inflammatory radio program magazine Der Deutsche Sender . The rubric in which the editors critically dealt with past radio broadcasts was called “Funk-Panger”.

Despite the modern outlawing of the pillory, similar forms of public display still exist: Actual or alleged criminals (often with a picture or name) are displayed in the media. In the USA, lists of offenders (e.g. “ sex offender registries ” for sex offenders ) with their full name, address and photo are now officially published by the authorities . In the context of so-called “creative sentencing”, especially in the United States, there is an increasing number of alternative guilty verdicts, including public denunciation of the convicted. Punishments that aim to create shame, so-called "shaming punishments", are common. Although the constitution forbids extraordinary and cruel punishments ("cruel and unusual punishments"), dishonor is not considered cruel according to the highest legal opinion. A case in the US state of Ohio also received media attention , in which a woman was sentenced by the court to hold up a sign saying "Only an idiot would overtake a school bus on the sidewalk" for an hour twice.

The legal basis of "online pillory" as they u. a. by the Bavarian State Office for Health and Food Safety and the State Office for Nature, Environment and Consumer Protection in North Rhine-Westphalia to publish violations of food law is controversial.