“Ground plan of the city and Tonderen Castle. Anno 1651 “by Johannes Mejer 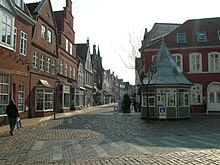 The Christ Church at Tønder 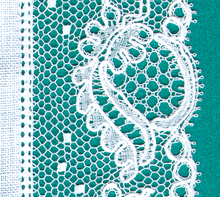 Tønder ( German  Tondern ; South Jutian : Tynne; North Frisian Tuner ) is a small Danish town on the Vidå (German: Wiedau ) near the German-Danish border . It forms the center of the municipality of Tønder in the Syddanmark region and belongs to the parish of Tønder Sogn . The 7581 inhabitants (January 1, 2020) are called Tonderaner.

The city is known beyond the country's borders for the international Tønder Festival , which presents folk and roots musicians every August .

The city was called Thundern (as much as "fenced beach") before 1800, and Tunder, Tundær in the 13th century .

Tønder is one of the oldest towns on the land bridge between the North and Baltic Seas. It was already known as a port in Flensburg in 1017. In 1227 the Dominicans and in 1238 the Franciscans came to Tønder and founded monasteries. In 1243 the place received Lübisches town charter and is therefore Denmark's oldest town today . In the Middle Ages it was one of the few ports on Schleswig's west coast. The ship in the city ​​coat of arms still bears witness to this today . Because of its low location, the city was repeatedly hit by storm surges, including 1532 and 1593. In 1615 the water reached the windows of the castle, in 1634 it was three feet high in the church. There have been numerous fire disasters in Tønder. The plague ravaged the city five times in the 16th and 17th centuries.

The cattle trade was of great importance until the 20th century, as the city was located on the western Ochsenweg . The castle, located on the edge of the trading town, developed into the administrative center of a large office. When the country was divided in 1544, Johann II , known as Johann (Hans) the Elder, became sovereign, after his death in 1581 the Duke of Gottorf until the division was lifted in 1713/21.

With land reclamation on the west coast, the city lost its access to the sea and with it a considerable part of its economic importance. In the 17th century, lace- making flourished as an important industry. In 1788 the city became the location of the first teachers' college in the country.

In the 19th century, the city got sucked into the German-Danish conflict. The majority of the citizenship was German-minded and joined the Schleswig-Holstein side in the Schleswig-Holstein War (1848-1851), while the northern area around the city in particular remained Danish. After the rest of the state under the Danish crown, Tønder retained its administrative functions. However, the language scripts introduced in 1851 met with resistance. In order to stop the language change to German, they introduced Danish as the general language of instruction with four weekly German lessons in the mixed-language areas of Schleswig (from Tondern to the surrounding areas of Husum and Kappeln). The church language should alternate between German and Danish. However, Tondern (like the southern leak) was exempt from the restriction to four weekly German lessons.

After the German-Danish War in 1864, the city came to Prussia and from 1871 to the German Empire . It was the seat of the district of Tondern , but lost its economic importance. The Danish language was pushed back during this period. In 1888, German became the sole language of instruction in the Schleswig region. Exceptions were four hours of religion per week. From around 1914 to 1918 Tondern was a base for military airships and zeppelins . From 1868 it was connected to the main line Hamburg - Fredericia via a branch line to Tinglev . In 1887 it became a junction on the march railway from Hamburg to the then Danish border and to Esbjerg and became a transfer point for travelers to Sylt via the branch line to Højer Sluse, which was built soon afterwards .

After the First World War , Tønder fell to Denmark in the referendum because of the en bloc rule for Zone I , although 77 percent of those eligible had voted to remain with the German Reich (details in the article North Schleswig ). In the following years, the German parties had a majority in the city council. Until 1945 the city was signposted in two languages. Shortly after the Danish administration was established, Tønder became the site of a garrison. From April 9, 1940 ( Operation Weser Exercise ) until the end of the war , Denmark was occupied by the Wehrmacht; afterwards the political importance of the German part of the population waned considerably. The border location hampered the development of the city. Nevertheless, some companies settled there. The importance of tourism increased. Despite the improvement in cross-border traffic, Tønder's situation became increasingly difficult towards the end of the 20th century. The teachers' seminar closed its doors in 1989, the barracks in 2002 and the hospital in 2003, which has since been expanded as a private clinic.

Tønder belonged to Harde Tønder, Højer og Lø Herred in Tønder Amt until 1970 , then to Tønder Kommune in Sønderjyllands Amt . In the course of the municipal reform on January 1, 2007 , the new Tønder municipality was formed.

The Kaakmann on the market square

More sights in the neighboring village of Møgeltønder .

In Tønder there is a high school with a Danish-German "European class" attended by students from the nearby Friedrich Paulsen School in Niebüll , the German Ludwig Andresen School, a German kindergarten, a municipal library and a German library. A German pastor works for the German part of the Evangelical Lutheran parish.

The city's annual cultural highlight is the Tønder Festival , the international folk and roots music festival that takes place on the last weekend in August . It is one of the largest festivals of its kind in Europe.

At the border south of Tønder the federal road B 5 ends , which is continued in Denmark as Primærrute 11 . Other important highways are the A 8 to Sønderborg with a connection to Flensburg in Kruså and the roads to Kolding and Aabenraa .

The station Tønder (Tønder station) is located on the march web and is used by the Regional line operated 66 of Niebüll according Esbjerg wrong, and also serves the station Tønder Nord. This line is operated by Arriva Danmark.

The cross-connection to the Hamburg – Fredericia Eastern Railway to Tinglev , opened in 1868, was discontinued in 1974 and then only served as a museum railway. At Tønder station, the switch connections have been expanded and the line is closed. From the Tønder – Højer Sluse railway line , which was the main connection from the mainland to Sylt until the Hindenburg dam was built, only dams are visible today.

Similar to the Scottish Gretna Green , Tønder, close to the border, has been a marriage paradise since the mid-1960s. Here between 2500 and 3000 marriages (as of 2008) are concluded annually , including same-sex marriages . Marriage with foreign partners involves fewer formalities than in Germany and is recognized across the EU . In 2007 there were only around 150 couples from the region compared to the 2,366 foreign wedding couples. Various documents and a registration fee of 855 Danish kroner (or 115 euros; as of 2017) are required . An estimated 8,000 additional overnight guests brought the local economy in 2007 additional income of over 17 million crowns .