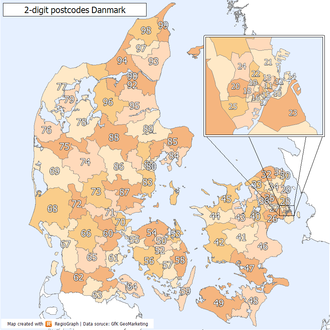 The Danish postcodes have four digits and must always be given in full. It was introduced in Denmark , including Greenland and Faroe Islands , on September 20, 1967 .

Since there are fewer than 1000 post offices, a system could be developed that is suitable for both the mail distribution in the outgoing and incoming letters. The last two digits indicate the district more precisely in larger cities. In addition, separate postcodes have been provided for certain streets within large cities and for individual large recipients.

Approximate geographical location of the first digit or the first two digits: