Akranes [ 'aːkraˌnɛˑs ] is a port city in Iceland north of Reykjavík in the Vesturland region . On January 1, 2019, the city had 7,411 inhabitants. This makes it the largest city in West Iceland.

Langisandur in Akranes in winter, Akrafjall mountain in the background

Map of the region 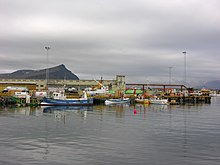 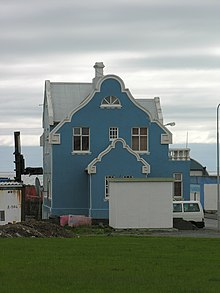 The name of the city means Kornacker Peninsula . This name can be found in very old sources and can therefore be assumed that a lot of grain was planted in the area during the Viking Age.

The tip of the peninsula where the present city is located was formerly called Skagi (German: peninsula ) and from the 17th century Skipskagi or Skipaskagi . Colloquially, the name Skagi is still often used for Akranes, especially in West Iceland.

To the east of Akranes is Mount Akrafjall , on the south side of which is Innrihólmur . Akranes is located on the large Faxaflói bay , the southern part (around Langisandur) on the much smaller Krossvík bay , which belongs to Hvalfjörður .

The area is since the Conquest settled Islands.

The land register reports that the Irish brothers Þormóður gamli Bresason and Ketill Bresason came to Iceland from Ireland and took possession of the land between the rivers Aurríðaá and Kalmansá . Some farm names in the area refer to other Irish settlers such as B. Kjaranstaðir, Kalmansvík, Bekanstaðir.

Role of fishing and the Hanseatic League

Presumably this was a place of fishing from ancient times, but there is evidence of a winter fishing village of the Bishop of Skálholt Brynjólfur Sveinsson from the middle of the 17th century. Soon afterwards the first fishing village in Iceland was built here. Even today, fishing and processing play a very important role as an employer in Akranes, which is one of the main fishing locations in the country.

In the Middle Ages, the Hanseatic League also had a base in the Krossvík Bay until 1602 . With the introduction of the Danish trade monopoly, however, the people of Akranes were forced to conduct their business at Hólminn near Reykjavík.

Akranes developed from this fishing village in the 19th century and was granted market rights in 1864. At that time the town had 300 inhabitants.

The first jetties date from 1874, and port facilities were built in the Krossvík Bay in 1929. And there is still the port, which is one of the most important fishing ports in Iceland.

The church was moved from Garðar to Akranes in 1896.

Akranes received city charter in 1941 and is one of the largest cities in Iceland outside the capital region.

Akranes has a relatively large open-air and local museum ( Safnasvæðið á Akranesi , formerly: Museum in Garðar ). This includes a mineral collection and a boat and fishing museum, which includes Iceland's oldest surviving fishing trawler. Other larger sections of the museum include: a section on sports in Iceland and a section of the National Surveying Institute and tunneling under nearby Hvalfjörður , the importance of which should not be underestimated for the prosperity of the city of Akranes. .

Also worth seeing are the lighthouses built in 1918 (restored in 1992) and 1946. A modern sculpture commemorates the sinking of the Hafmeyjan ship , in which 11 young people were killed in 1905.

Because of the history of settlement, Akranes feels connected to Ireland. The Írskir dagar festival is therefore held once a year in Akranes.

Akranes is also considered one of the cities where sport holds a particularly high place.

The football club ÍA Akranes has won multiple Icelandic championships and cups and has played many UEFA Cup games.

Part of the museum in Garðar is dedicated to Icelandic sport.

There are several schools on site, including elementary schools and a secondary school ( Fjölbrautaskóli Vesturlands ).

Iceland's largest cement plant processes shell limestone in Akranes. A well-known joke says that there are two architectural styles in Iceland: before and after the Akranes cement plant was built.

One lives from fishing and processing, but now also increasingly from the service area. In addition, thanks to the Hvalfjörður tunnel, which has existed since 1998, many residents commute to work in Reykjavík.

The hot water for heating and daily use comes from the largest spring in the country, Deildartunguhver , and is piped to Akranes via approx. 60 km long pipes.

Since 1998 Akranes has been connected to Reykjavík via national road 1 ( Hringvegur ), more precisely its part called Vesturlandsvegur , through the Hvalfjarðargöng tunnel , which runs under Hvalfjörður . From the tunnel, road no.501 leads to Akranes and on the north side around Mount Akrafjall, while Hringvegur runs south past the mountain towards Borgarnes.

Before the tunnel was built, there was only a ferry connection and a poor cross-country route to Reykjavík.

Municipalities in the Vesturland region