Board with wind speed and temperature display : the Hringvegur north of Hellisheiði , at the Litla Kaffistofan rest house

The Hringvegur [ 'r̥iŋkˌvεːɣʏr̥ ] (dt. Ring road ) or also ðjóðvegur 1 (dt. National road 1 ) is a main traffic connection in Iceland and as such part of the Icelandic road system . The entire ring road has been paved since August 2019. With the exception of a few bridges, it also has two lanes throughout, and three to four lanes in and around Reykjavík.

The Hringvegur runs around the main island of Iceland (with the exception of the Westfjords ) over a total length of 1341 km (as of 2017). Almost all of the important cities and towns are located on it, from the capital Reykjavík to Borgarnes , Akureyri , Egilsstaðir , Höfn and Selfoss .

The route between Egilsstaðir and Breiðdalsvík was changed in November 2017 . The map still shows the old course. The first part from Norðfjarðarvegur almost to Reyðarfjörður was renamed the ring road, as was the entire Suðurfjarðavegur . The former course of the ring road in this area has become Skriðdals- og Breiðdalsvegur (road 95), which is not yet asphalted. As a result, the ring road was 10 km longer, but it is completely paved on this stretch.

From Reykjavík to Borgarnes 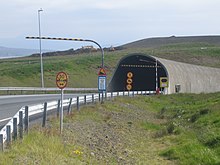 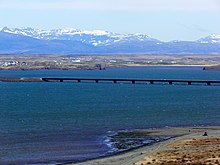 From Borgarnes to Blönduós 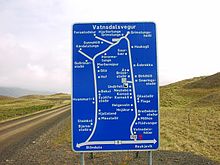 At the Vatnsdalshólar in the Austur-Húnavatnssýsla district : display board on a side road with the names of the farms along the way

From Blönduós to Akureyri

From Akureyri to Egilsstaðir

Unpaved section between Egilsstaðir and Höfn

From Egilsstaðir to Höfn

From Höfn to Selfoss

Skeidarásandur with the bridge in the foreground

Between Selfoss and Hella in South Iceland

From Selfoss to Reykjavík

First, the connection to the north towards Akureyri was expanded and to the south-east towards Selfoss via the Hellisheiði , keeping roughly the course of the former main connection routes. These still looked quite adventurous in the 1930s, as you can easily see from the preserved pieces on the Holtavörðuheiði , for example. It is not for nothing that a couple who dared this adventure proudly presented themselves to the photographer on this plateau (memorial plaque on Kattahrýggur).

In the 1970s, the southern route to Höfn began to be expanded across the Skeiðarársandur plain and the ring road was finally completed on July 14, 1974 with the bridge over the Skeiðará . However, they knew of the dangers this part of the road would face. In fact, it was partially destroyed during the 1996 glacier run between Kirkjubæjarklaustur and Skaftafell . The crumpled remains of the steel skeleton of a destroyed bridge can still be seen today. From 1972 to 1995 the road was also named Suðurlandsvegur, Vesturlandsvegur, Norðurlandsvegur and Austurlandsvegur in sections, depending on the parts of the country through which it runs. You can still find these names in older maps and in navigation systems.

The whole street has been paved since August 2019. Most recently, there was only a short stretch in East Iceland (on Berufjörður between Djúpivogur and Breiðdalsvík ) as a gravel road, since the Hringvegur no longer officially leads over the Breiðdalsheiði , but through the Eastfjords due to a change in the numbering in November 2017 . New routes and the opening of tunnels are also shortening the route, for example the construction of the tunnel under Hvalfjörður near Akranes and the tunnel under the Almannaskarð pass east of Höfn , which opened in 2005 . This is where the greatest incline on the Ringstrasse used to be.

Outline of the history of the Hringvegur

The Hringvegur is the most important traffic artery in Iceland. It enjoys unbroken popularity with tourists in Iceland , as there are numerous sights in its vicinity.

In recent years, artists have also adopted it and made it the subject of films and novels, such as the film Hringurinn by Friðrik Þór Friðriksson (1984) and the novel Hjartastaður ( Heart of the City ) by Steinunn Sigurðardóttir (1995).