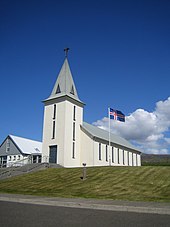 Hvammstangi [ 'kʰvamsˌtʰauɲcɪ ] ( Eng . "Muldenlandzunge") is the capital of the municipality Húnaþing vestra in the region of Norðurland vestra in northwest Iceland . On January 1, 2019, 573 inhabitants lived in Hvammstangi.

Hvammstangi is located on Miðfjörður , part of the Húnaflói Bay at the southwest end of the Vatnsnes peninsula . About 25 km to the north on road 171 is the Hindisvík bay with a large seal colony. Bird watchers can be found on the coast.

Lake Hóp , one of the largest in the country, lies between Hvammstangi and the next larger town, Blönduós . It has a connection to the sea and its area fluctuates greatly when the tides change .

The history of the place begins with the receipt of market rights in 1895. Above all, the rich shrimp fishing grounds in Húnaflói brought Hvammstangi a brisk economic boom.

In 1998, the union of seven rural communities, including Hvammstangahreppur, formed the community of Húnaþing vestra . As a result, Hvammstangi lost its independence as a municipality.

Like the community, the town is also affected by the rural exodus.

Hvammstangi has a seal center (Seals and Sagas) in a listed building and a trade museum (Verslunarminjasafnið) at the harbor. The small gray church Hvammstangakirkja , originally from 1882, is managed by the National Museum .

There are shops in the village (supermarket, petrol station, pharmacy), a post office, a hospital and an old people's home.

The distance to the capital Reykjavík is 197 kilometers. Hvammstangi is about 5 kilometers north of the ring road ( Hringvegur ).