The title of this article is ambiguous. Further meanings are listed under Region (disambiguation) .

Region referred to in the geography an area that is geographically forms, political, economic and / or administrative a unit. The term is used in many different contexts. 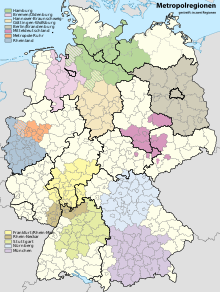 Only possible for regions: The hatching shows that there are areas that belong to two regions at the same time. The areas shown here as “free of regions” in light color do not belong to any metropolitan region ; in fact, each area belongs to several regions outlined according to different criteria. 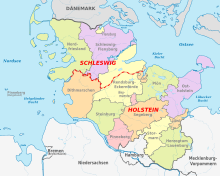 In practice, however, both demarcation principles are partly subject to the limitations of the general availability of relevant data, such as official statistics or ecology. For this reason, the structure according to the administrative principle is another option. Here, the regions are administrative units such as B. States or municipalities, which are characterized by specific socio-institutional structures, designated protected areas, or areas of validity of agreements. This can also create planning regions, the delimitation of which results from planned targets. The administrative or planning regions are often used as the basis for regional delimitation according to the homogeneity or functional principle, since reliable statistical data is often only available on this basis.

Functionally, a regional delimitation can always be linked with an intention that puts a certain aspect in the foreground; Natural-geographical , cultural-historical , ecological , social and economic aspects are weighted and combined differently. So z. B. Economic regions primarily defined from a socio-economic perspective with the aim of making better use of value creation potential and creating jobs.

Territories such as municipalities , districts , states , (national) states etc. are generally associated with certain fixed - political - boundaries of the administrative structure . The administrative bodies are the local authorities assigned to each territory as legal entities under public law . Each smaller territory forms a subset of one and only one larger territory, and there are clearly defined, legally binding boundaries between the territories. A region, on the other hand, can be defined more freely (and especially less sharply delimited). As a medium-sized area, it can lie within political boundaries (differentiating between sectors) as well as exceeding or dissolving them (transnational / municipal-integrating).

The difference between a region and a territory becomes clear in the fact that dual affiliations contradict the essence of a territory, but certainly occur in regional terms with the same definition basis. On the other hand, historical geography shows that cities, counties, countries and states are dealt with just as loosely as regions, with planners, politicians and the military abolishing them, adding larger units, renaming them or changing their borders. From a socio-geographical point of view, nations are blurred by the concept of states .

It is different in the natural sciences. Wherever regional classifications are created, an attempt is made to establish exclusive regional affiliation ( classifications ). In order to emphasize the clear assignment, politically charged terms are often used (such as flora kingdom , climatic zone ). Typical for natural regions, however, is the blurring of the margins on a small scale, so an area of ​​a watershed can fall into two hydrographic catchment areas, or a geotope can be characterized by two adjacent geological zones.

Due to its flexibility, the term is often used today when it comes to planning and designing new settlement and economic structures. This is based in particular on the concept of the Europe of the Regions ( EUREGIO , INTERREG ), or it is e.g. For example , we speak of model regions when it comes to initiating “sustainable regional development”.

There is confusion about the term due to the English word region , which is also applied much more specifically to political structures, while the German word still has a strong connotation to the term landscape , which in the sense of geography represents only one type of region (whereby the The word "landscape" itself was originally institutionalized, and only in the course of modern times has it been transferred to the term area ). Italian regione corresponds to an administrative structure using the term provincia (see Italy ) - therefore, translation can lead to misunderstandings.

In contrast to “a region”, “regional” therefore does not require the determination of an absolute geographical extent, the establishment of an absolute limit, but a relative limit based on a particular point of view.

The linguistic distinction is made more difficult by the phrase “do something in the region”, which can have the same meaning as “regional”.

The difference in meaning is also subject to a sustained shift in meaning: “Regional institutions” can be both “regional” based on a particular point of view, but also “institutions of a region”.

The word region itself is etymologically at the root of the Latin regere ' to lead, to direct', and originally has a strong organizational structure, but has changed meaning and even exchanged the position with the word territory , which stands for terra 'earth, land' and primarily landscape was intended. In the Romance languages, regio has retained its administrative significance ( France , Italy ).

Designations for regions ( terms such as choronymics , geographical space / landscape names ) are derived from different topics:

The following subdivision aims to structure the variety of intentions for regional delimitations in a clear and comprehensible way based on these aspects. The classification of the regions is based on the assumption that the relevant aspect plays the most important role for the respective intention; z. B. Economic regions under “Economically Defined Regions”. The other aspects are also recorded in their importance and sometimes serve as anchors for critical reflections. The primary economic intention in an economic region can provoke criticism from an ecological and social perspective (destruction of landscapes, migration flows , population density , etc.).

In the case of natural areas , geomorphological , geological , hydrological and pedological criteria are in the foreground in order to partly define cross-border territorial units on the basis of certain characteristics ( physical geography with its sub-subjects). They are also explored in terms of their cultural-historical significance, i.e. their settlement history in the settlement geography , their traffic-related aspects ( traffic geography ) and in the assignment of nature conservation ( ecologically defined regions ) and tourism concepts ( tourism geography ) .

The geological provinces or major regions of the world

In geology is found by Coffin and Eldholm (1992), a division into geologic provinces , the shields , continental plates and -Schilde, orogens and highlands , basins and continental crust and Large Igneous Provinces includes (LIP).

In addition, there are numerous other regionalizations of the tectonic , geophysical and petrological structure of the earth's crust, for example through physical-geological exploration of the subsurface or the investigation of fault zones or rock explorations on the earth's surface.

In the natural and human sciences there is a historically grown continuity of regional terms. They serve as rough geographical markings for the reconstruction of significant phases in human history. For example, terms such as Levant and Fertile Crescent have become established for research into the Neolithic Revolution .

Regions can also be defined by socio-cultural ties such as languages , dialects or a regional cuisine ( cultural geography ).

Ecological, economic and social perspectives lead to additional questions and reflect the entire spectrum of importance of the region . From an ecological point of view, the long-term influence of our cultural creative processes on the landscape and natural space is interesting in order to be able to develop and maintain sustainable forms of management (soil cultivation, water management, settlement construction ...). In economic history, questions are asked about the structure and scope of old currency and trading systems (monetary system, trade routes, prosperity ...), and sociologists look for clues about the political structures and social habitus of old ethnic groups (political order, language, clothing, coexistence ...).

Further examples can be obtained from the above natural and geographical regions.

Not only local authorities, but also political units such as administrative districts have emerged through political action. In intact democracies , regional reforms are decided by parliaments or by the voting population in referendums . The national administrative structure is the study area of political geography .

The EU has, on the basis of national definitions of territories, a system of statistical regions developed NUTS regions . Development regions , such as those of the LEADER program, or large associations such as the Alpine Convention are associations of municipalities or districts to form a region without the characteristics of a territory. The regions of the INTERREG concept are dedicated to cross-departmental municipal cooperation .

Associations at the supranational level are concepts such as ASEAN (Association of Southeast Asian Nations) or NAFTA (North American Free Trade Area), in which states in a large region of the world organize themselves into an interest group.

In the course of the global economic challenges, certain economic regions are being defined today . Here one examines economic geographic issues in the context of other geographic aspects.

From a regional economic point of view, it is either a matter of promoting structurally weak peripheral regions or economic problem areas, for example through structural funds .

In the latter, metropolitan areas often form a core, around which an economically interesting surrounding area is defined. The economic globalization increasingly restructure the pressure on individual countries.

While the European regions are more likely to be assigned to an overarching economic policy, the concept of Europe of Regions is more based on independence. It is hoped that this will result in a more effective and efficient regional administration with more expertise and closeness to the citizens, a strengthening of the competitiveness and infrastructure of the regions and the implementation of the principles of subsidiarity . To implement independent regional development , the use of regional currencies is also being tested and discussed.

Another important economic region are the tourism regions , which are geared towards common infrastructure and marketing.

An increasingly important group are the planning regions , in which the most diverse aspects - in addition to the economy, but definitely to promote the same - are taken as a basis. These include, for example, transport associations to develop joint transport infrastructure or the EU- LEADER program to promote structurally weak areas. In developing countries, too, parts of the country are grouped into developing regions for reasons of development policy .

Prototype of the regions of ecological intention, scientifically as well as politically, are the protected areas in nature and environmental protection : Here, limits are defined by the legislature, which are subsequently also consolidated in nature - solely through the different criteria inside and outside the protected area. The concept of the buffer zone tries to compensate for this disadvantage.

In connection with the changed ecological awareness, there are efforts and initiatives to design ecoregions . Many aspects stand side by side here: ecological agriculture, promotion of regional value chains and tourism, creation of a sufficient employment structure, use of gentle technology, as well as preserving diversity and thus increasing the quality of life. This includes the UNESCO biosphere reserves and the implementation of the EU's local agenda programs .

Another example is the call for GMO-free regions in order to make the population aware of the risks of using genetically modified seeds. Here the tension between social, ecological and economic aspects becomes particularly clear; Nutritional questions and concerns about biodiversity meet economic and profit-oriented interests.