This article was due to content flaws on the quality assurance side of Geosciences portal entered. This is done to increase the quality of the articles in the geosciences topic. Please help to correct the deficiencies or take part in the discussion .  ( + )
Reason: Already since February 2008 with revising Bapperl. Structure of an orogen, options for classification, types are still missing. Differentiation from orogenesis needs to be more developed. --Jo, Dec 5, 2008

The major geological regions of the earth's crust. The orrogens of the Phanerozoic are shown in lime green. 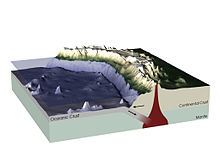 The central Andes, an example of peripheral orogeny

The term orogen was introduced by Leopold Kober in 1921 . For Kober, the antonym to orogen was a “cratogen” or “craton”. An orogen (composed of the Greek words ὄρος (óros): mountain and γεννάω (gennáo): generate) used to describe an unfolded geosyncline . The term tectogen is used synonymously. An orogen is a spatially closed, delimitable mountain unit, which is characterized by folding and blanket formation. Originally the term was used for those mountains that surround cratons (ancient continental masses).

Today the term is used more generally in geology and describes mountains that were created by the collision of lithospheric plates ( continental plates ). An orogen thus represents the crumple zone of two colliding plates. The process of the formation of an orogen is called orogenesis .

A distinction is made between internal orogenesis ( unfolding of mountains due to the collision of two lithospheric plates) and peripheral orogenesis ( submergence of one lithospheric plate under another, which is thereby raised). Well-known examples of internal orogeny are the Alps , the Himalayas and the Urals . Peripheral orogeny shows up in the formation of the Rocky Mountains .

The term orogen has a time reference and always refers to a specific time frame. The orogenic phases important for Europe are the Caledonian , Variscan (Hercynian) and the Alpidic orogeny .