The African golden cat ( Caracal aurata , Syn . : Profelis aurata Sewerzow , 1858) is a wild cat of the rainforests of Africa . It is one of the least researched cat species in the world and used to be part of the now disbanded genus of the golden cats , but according to more recent findings it seems to be more closely related to the caracal than to the Asian golden cats .

The African golden cat is about twice as big as a house cat: it has a head body length of 61.5 to 101 cm, a tail with a length of 16.3 to 35 cm, the shoulder height is 38 to 50 cm. Males are larger, heavier and stronger and weigh 11 to 16 kg, while the females weigh 6 to 8 kg, only half the weight of the males. Compared to the serval and caracal , the tail is relatively long, the black ears are smaller and rounded. The coat color is very variable. The most common are red-brown, red-gold and silver-gray animals, but brown and completely or partially black golden cats also occur. On the stomach, but also occasionally all over the body, there are more or less distinct dark spots in the shape of spots or rosettes. The underside is always clearly lighter than the upper side, and the face has black spots above the eyes. The tail can be patterned with complete or discontinuous bands, or unbanded. Between the shoulders and the top of the head, the hair falls forward and swirls of hair form where the hair changes its direction of fall. African golden cats make a variety of vocalizations, including hissing, meowing, growling, purring, and gurgling sounds.

The African golden cat lives in the rainforest belt of West and Central Africa or in high mountain landscapes and is relatively rare in most of its range, but can occur locally more frequently. It prefers primary forests, but also occurs in secondary forests with a lot of undergrowth. Golden cats are very rare in the dry forests of East Africa and occasionally penetrate along rivers into the open savannah. If you are lucky, you might see golden cats in the following wildlife sanctuaries: Salonga , Ruwenzori , Virunga , Garamba and Queen Elizabeth .

Because of their shy and hidden way of life, golden cats are rarely seen. They are predominantly terrestrial (living on the ground) and neither exclusively nocturnal nor predominantly crepuscular or diurnal, but adapt their activity pattern depending on the circumstances and can then be irregularly active at any time during the day or night. Although they can climb well, golden cats hunt their prey primarily on the ground. These include rodents such as mice, small antelopes such as duikers and hyrax , croissants, tassels , rats, shrews, pangolins , elephants , monkeys and birds.

Very little is known about the mating behavior of golden cats in the wild. Locals report that the golden cat only ever gives birth to one young, but twin births have been observed several times in zoos. After a gestation period of 78 days, the golden cat gives birth to the young, weighing around 200 g. Males become sexually mature after 20 months, females after 11 months.

The African golden cat was described in 1827 by the Dutch zoologist Coenraad Jacob Temminck under the scientific name Felis aurata , but assigned to the monotypical genus Profelis as early as 1858 by the Russian zoologist Nikolai Alexejewitsch Severzow . In the meantime it was also placed in a common genus Catopuma , together with the Asian golden cat and the Borneo golden cat . According to more recent findings, however, it is more closely related to the caracal and the serval than to the Asian golden cats and is now classified as the second species after the caracal in the genus Caracal . 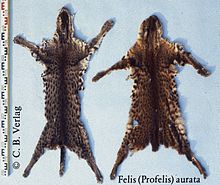 The hunt for golden cats was banned in twelve African countries and these animals were placed under absolute protection. There are regional reports of golden cats entering chicken coops and thereby harming farmers, but this seems to be rare. For some pygmy peoples , golden cat skins are part of their clothing, and the tail of a golden cat is considered a talisman when hunting elephants .

The IUCN estimates the population of the African golden cat as endangered (Vulnerable).