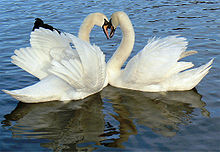 When mating behavior is defined as the totality of the special species-specific behavior of animals during distinct phases of the mating season .

Mating behavior is the species-specific behavior of animals during the mating season. It is roughly divided into three phases

Depending on the level of detail of the observation, these three phases can be further subdivided.

The type and complexity of mating behavior depends on the respective species . It can happen purely instinctively , i. H. show complex behaviors composed of simple behavioral elements that are constant in their basic pattern (i.e. innate) and that can be formally and physiologically differentiated from other behavioral complexes. In higher mammals with complex social structures, mating behavior also contains learned behaviors.

Furthermore, the description of the mating behavior includes investigations into which parameters trigger the actual mating behavior, when and how often it occurs in the annual cycle (or whether it is just a one-off event), whether it requires a special geographical environment, whether the species in question is monogamous or polygamous Behavior shows and whether it is mass or individual behavior, which role is played by the male and which is assigned to the female, and how long (seconds to weeks) the entire mating behavior lasts.

The demarcation of mating behavior from other behavior of animals, for example previous territorial behavior or subsequent brood care behavior , is examined and described in behavioral biology .

In connection with people , the term "mating behavior" is only used when behaviors of humans and animals compared and only the purely biological aspects are considered, or - on a literary level - if one aspect of human sexual behavior ironic - humorous reduced to a slogan would like to.

The totality of life expressions, behaviors, emotions and interactions of people in relation to their gender are not called "mating behavior", but sexual behavior or sexuality of humans .