This article is about human sexuality. For general basics see Sexuality , for practical exercise see Sex .

The first kiss of Adam and Eve , painting by Salvador Viniegra , 1891

In the broadest sense, human sexuality is the totality of expressions, behaviors, emotions and interactions of people in relation to their gender.

The human biology considered human sexuality in terms of their role in the recombination of genetic information in the context of sexual reproduction . The focus is on gender differences between men and women . In the socio- biological and behavioral sense, human sexuality encompasses the forms of decidedly sexual behavior between sexual partners . The sexual behavior of humans - like that of many vertebrates - has numerous functions in the social structure of a population beyond reproduction and genome exchange .

Therefore, most of the human sciences also deal with the subject of human sexuality. Psychological, social and cultural factors in particular are seen as important for human sexuality. Sexuality is counted among the basic human needs , both physiologically and socially.

The following important information is missing from this article or section:
The sexual physiology is completely absent here!
Help Wikipedia by researching and pasting it .

Classic symbols for female and male

The development of a hormone- driven system was an important step in the development of sexual behaviors. In addition to reproduction by exchanging genetic information , sexual intercourse in higher organisms also has a social significance, especially in primates (such as humans and bonobos ).

A person's sexuality and sexual morality influence his psyche , his personal development , the forms of his coexistence and the entire social structure , i.e. the culture and society in which he lives. Human sexual behavior shows a variety of sexual orientations . In addition to heterosexuality , in which the sex drive (see also desire ) is directed towards the opposite sex, homosexuality and bisexuality , in which the interest is predominantly or also directed towards the same sex. With asexuality , there is no desire to have sex with the male or female sex. The Pansexuality as desire is regardless of gender classify the queer understanding (see queer theory ).

Since sexual preferences and, in particular, their social acceptance are subject to social changes, the boundaries between socially legitimate, legal and sexual behaviors that are considered harmful are shifting historically and interculturally. A person's sexuality or their sexual preferences manifest themselves in puberty . What parts of these preferences have been learned or are already established in the genetic make-up is part of the scientific discourse . 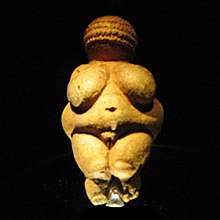 Neolithic Venus figurines such as the Venus von Willendorf are considered to be an expression of early human gender reference.

Many archaeological finds - such as the Venus von Willendorf - show that preoccupation with sexuality was part of human culture from an early age. Their importance can be recognized by the oversized representation and coloring of the genitals of the historical artifacts. Vulva- and phallus-like stone setting can be interpreted as a sign of the veneration of genital organs.

One thesis is that the Neolithic Revolution could have changed the human relationship to sexuality. According to this concept, the man viewed woman's sexuality as increasingly dangerous and in need of control. In this context, there is speculation that caring for and caring for children is only worthwhile if it is a question of one's own, genetically related offspring. In this context, the fact that the woman has covert fertilization is said to have played a role: since the man could not check in retrospect whether he was the father of the children, he began to subject female sexuality to taboos and prohibitions. In this naturalistic-biological perspective, it cannot be explained why all other forms of sexuality are also associated with taboos and prohibitions.

In antiquity and antiquity, the relationship to sexuality is extremely different depending on the culture and epoch. It is known from some advanced cultures (e.g. Greece) that prostitution and open homosexuality were socially acceptable in them.

The morality of the Christian Church has been strongly sex-hostile since the Middle Ages ; Sexuality should only serve the conception of children. Lust was counted among the main vices , and homosexuality was classified as abnormally pathological and unnatural. A rigid adherence to chastity was propagated, and sexuality was placed in the nimbus of the diabolical.

While in late medieval Europe and in certain phases of the early modern period - from the medieval bathhouses to the absolutist courts - quite informal morals prevailed, it was only with Puritanism and the moral concepts of Victorian England or Wilhelmine Germany that repressive moral concepts began to spread Overall suspicious of sexuality. She was z. B. viewed as animalistic, raw and dangerous, since it threatened to break the boundaries of reason . In these times in particular, women were not allowed to exercise their sexuality independently.

The concept of drive theory , which the Viennese doctor and founder of psychoanalysis , Sigmund Freud , developed at the beginning of the 20th century, is of great importance in the history of science . This concept saw the psyche and human development to a large extent determined by the sex drive. Freud described the sex drive as having a biological basis, but researched it mainly in its psychological form.

He called the psychological manifestation of the sex drive the libido . This concept played an essential role in “classical” psychoanalysis, since it is assumed there that the child's psychological development is significantly influenced by his or her sexuality . Significant disturbances in psychosexual development can lead to neuroses and psychoses. In complete contrast to the ecclesiastical critics who accused Freud of promoting pansexualism and fornication and contributing to the brutalization of morals, Freud saw the pure recognition of individual sexuality as a characteristic of mental health. Here, sexuality does not have to be lived out. Freud's early and later discarded concept of catharsis was also misunderstood as a call to sexual activity. Through his close connection between sexuality and psychological development, Freud also laid the foundation for the psychological investigation of perversions , which are now known as paraphilias . Paraphilias describe sexual behavior that deviates from the norm.

With Freud's psychoanalysis at the beginning of the 20th century, new ideas about the role of sexuality emerged: it is a natural drive, its expression liberating, necessary and positive, while its suppression produces neuroses .

The 20th century is considered the century of the sexual revolution (s), and not just in terms of Freud. At the beginning of the century, Magnus Hirschfeld drew attention to himself in Germany with his demands for homosexuals to be free of punishment . He founded the world's first institute for sex science in Berlin .

In 1917 Richard Oswald had the educational film about sexually transmitted diseases Let there be light! Shot on behalf of the German War Ministry. This film alone had three episodes. In 1919 Oswald brought the problem of homosexuality and blackmail into a criminal act: Different from the others . Because there was no film censorship in Germany from the end of the First World War until 1920, the wave of “educational films” was followed in 1919 by the actual “speculative sex films”, at that time still called “moral films”. In the 1960s this commercial-social development was repeated in a similar way.

In the 1930s, antibiotics made it possible to treat venereal diseases effectively for the first time, so that the argument that sexual freedom is “punished” with an incurable disease became less and less important.

According to studies by the American historian Dagmar Herzog , the attitude towards sexuality during National Socialism was not consistently repressive, but rather "ambiguous" and in some cases liberal - with strong repression against minorities at the same time:

"Condoms were accessible, suggestions for better orgasms were present, pleasure in sexuality was desired, the whole discussion was more sex-positive - for non-homosexuals, non-disabled people, non-Jews."

In the 1950s there was a change to a much more conservative attitude. Morality, often viewed as bigoted , remained prevalent until the 1960s . For example B. carpenters as matchmakers when they arranged shared bedrooms for unmarried couples. Sexuality was a taboo subject that was not discussed in public. It was not until the wave of sexual liberation of the 68s - together with educational literature (such as that of Shere Hite ) and educational films - that new thinking about sexual pleasure was brought about.

With the increasing removal of the taboo on sexuality, this topic moved increasingly into the focus of science. Alfred Charles Kinsey researched human sexual behavior from the 1940s onwards and presented his findings in the so-called Kinsey Reports , the results of which sparked heated controversy. The research into sexuality and also sexual disorders, which are now seen as requiring treatment, goes back above all to the pioneers Masters and Johnson , who, as research duo, were dedicated to sexuality. Helen Singer Kaplan developed sex therapy in the 1970s .

Hans Szewczyk is one of the well-known researchers of the 20th century in the field of human sexuality .

In the present, sexual self-determination is increasingly becoming the guiding principle of the sexual morality that has been changed by the sexual revolution . Deviating sexual practices , forms of relationship and sexual orientations are increasingly socially accepted or at least tolerated as long as there is consent between the (adult) participants, the requirements of criminal law are complied with and no third party is potentially harmed or harassed.