Sexuality [ zɛks- ] (meaning “sexuality”, from late Latin sexualis ; from Latin sexus “gender”; cf. sex ) in the narrower biological sense denotes the existence of (at least) two different reproductive types ( genders ) of living beings of the same species , which are only capable of zygotic reproduction together with a member of the (or a) other type (sex) . Here sexuality is used to recombine genetic information, which in some forms of life is also made possible by non-polar, recombination processes similar to sexuality.

In the socio- biological and behavioral sense, the term describes the forms of decidedly sexual behavior between sexual partners . In many vertebrates, sexual behavior has acquired additional functions in the social structure of the population that no longer have to have anything to do with genome exchange , so that the partners involved do not necessarily have to be of different sexes.

In a broader sense, sexuality refers to the totality of expressions, behaviors , sensations and interactions of living beings in relation to their gender. Interpersonal sexuality is understood in all cultures as a possible expression of love between two people.

“The term 'sexuality' is young and first appeared in the botanist August Henschel in 1820 in his book On the Sexuality of Plants . Originally restricted to fort planting, it will soon be extended to humans and animals in the escalating sexual 'discourse' that is now underway. "

The formation of sexuality is one of the main factors and at the same time a result of biological evolution . The emergence of genetically different sexes and mating types is the starting point for the development of higher living beings from originally sexless unicellular organisms that only reproduce asexually (vegetatively). At the unicellular level, especially among the ciliates , there are also species with more than two different mating types and a graded ability to form zygotes.

Sexuality was probably only established around 600 million years ago in the Neoproterozoic . While living beings were initially only able to reproduce through simple cell division , which almost exclusively led to genetically identical offspring, at the end of this evolutionary step reproduction is associated with a union and re-division of the genomes of two individuals, which leads to genetically different offspring. This increases the variability of the individuals in a population and thus their ability to adapt. The probability that two different genomes will be merged is increased because there are at least two different mating types and only the genomes of two different mating types can be merged. This prevents the union of identical genomes. Most living things only have two pairing types, which in the case of oogamy are called male and female sexes .

In the case of many unicellular organisms, the sexual act consists of the amalgamation of entire individuals; some unicellular organisms, such as the paramecium , are capable of conjugation , in which the genome or parts of it are exchanged. Some bacteria can also transfer extrachromosomal DNA or, under certain conditions, parts of the genome ( DNA ) from one individual to another by conjugation ; this happens independently of the reproduction, which mostly takes place through cell division. In more advanced eukaryotes (i.e. animals , plants , fungi, and protists ), gender segregation meant the transition to sexual reproduction through the exchange and recombination of the genome at fertilization and the formation of a fertilized germ cell . This took place in the plants in the course of the tribal history by shifting the phases in the generation change .

The development of a system controlled by hormones was another step in the development of sexual behaviors. In addition to reproduction by exchanging genetic information , sexual intercourse in higher organisms also has a social significance, especially in primates (such as humans and bonobos ). 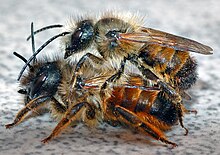 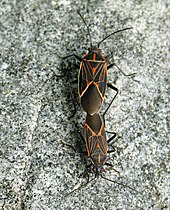 In zoology , success for the principle of “reproduction through sexuality” only becomes apparent through an understanding of an inevitably accompanying evolutionary step. First, sensory systems (sensory organs with subordinate behavior-relevant instances) had to be developed, which made it possible to search for and find possible sexual partners of one's own kind. Initially based on biochemical sensory stimuli , a variety of sensory systems developed in the animal kingdom. These sensory systems also offer a selective advantage to the most important aspect of life, namely self-preservation .

For male individuals of many, but by no means all species, it is true that they have already contributed their biological part to successful reproduction with the sexual act . However, the ethological findings of recent years also show that for many animal species and humans, common sexuality is the basis for a wide variety of further social structures, which in extreme cases can mean a lifelong exclusive sexual partnership between a female and a male.

All sexual behavior patterns, which often follow a rigid scheme, have in common that they are directed at something or someone in the outside world of the individual (see also archway scheme ); As a rule, this is an opposite-sex conspecific in terms of optimal reproductive success. Same-sex conspecifics cannot reproduce naturally.

“This factual, value-neutral, scientific and inanimate term“ sexuality ”creates a new reality insofar as it summarizes very heterogeneous phenomena of human feeling, acting, dreaming, experiencing and remembering on the one hand, and on the other hand detaches them objectively from the person and turns them into something concrete. "

In humans, as in other primates, sexuality, in contrast to many other animals, is not a pure instinctive behavior , but is subject to conscious decision-making processes and is embedded in the respective forms of social organization. People express their sexual attraction to the other through different forms and aspects: tenderness , words, various sexual practices , possessive behavior (see also desire ).

A person's sexuality influences their psyche , their personal development, the forms of their coexistence and - also influenced by sexual morality - the entire social structure , i.e. the culture and society in which they live. Since there are in some cases considerable differences between the sexuality of women and that of men, this discrepancy in heterosexuality leads to manifold difficulties in matching the sexes. The consequences of a lack of adaptation on both sides can also be reflected in sexual dysfunction in women and men.

In addition to the most widespread orientation of sexual behavior, heterosexuality, human sexual behavior shows other sexual orientations . These include, for example, homosexuality , i. H. the orientation of the sex drive towards one's own gender, the bisexuality , which is directed towards both sexes, the asexuality , in which there is no desire for sex - neither with the male nor the female sex. There are also various sexual preferences such as fetishistic sexuality , which is directed towards inanimate objects or certain actions. In the past, sometimes taboo and even made a criminal offense , many of these orientations are now gaining acceptance in enlightened societies and are now permitted in many countries.

Portal: Sexuality  - Overview of Wikipedia content on the topic of sexuality