As bisexuality (actually Ambisexualität , after the Latin prefix bi- for two ) refers to the sexual orientation or inclination to more than one sex to feel emotionally / or sexually attracted and. The adjective bi is used as a short form . Bisexuality, along with other orientations such as pansexuality, is one of the non- monosexual orientations.

Until the beginning of the 20th century, bisexuality was considered to be the presence of two kinds of gender characteristics in an individual, which today would be classified as hermaphroditism , hermaphroditism or intersexuality . The thesis of constitutional bisexuality also assumes that this is the normal development process of human sexuality and gender development. Every facility is there; as a rule, however, one binary gender characteristic would develop further, while the other would remain rudimentary . For humans, the sex chromosomes ( gonosomes ) are regarded by genetics as the determining factor for this development .

In the course of the 20th century, this concept of developmental biology was displaced by a conception that describes a sexual or erotic orientation in both science and colloquial language. As a result of the patriarchal foundation and structure of many premodern societies, reliable historical statements are often limited to the sexuality of men. A literary movement that reflected female interests did not emerge until later. The love between two friends was one of the most popular topics. However, manifest sexual relationships were generally left out because of their social offensive nature. Instead, in eighteenth-century Europe, for example, there was talk of the friendship or kinship between two women, which could not be interrupted even by marriage to a man. It was somewhat different in the Arab world when the world of women came into the focus of literature.

In 1915 Sigmund Freud put forward the thesis that the original disposition of humans was bisexual.

"To psychoanalysis [...] the independence of the object choice from the sex of the object, the equal free disposal over male and female objects, as can be observed in childhood, in primitive conditions and in early historical times, appears to be the original, from which restriction results the normal [ie heterosexual] as well as the inversion type [ie homosexual] develop in one direction or the other. In the sense of psychoanalysis, the exclusive sexual interest of men for women is a problem that needs to be clarified and is not a matter of course [...] "

Freud never made clear statements about the causes of this “restriction”. In other writings, especially in connection with the Oedipus complex , he seems to assume heterosexuality as an original disposition of at least the man, while homosexuality, on the other hand , appears to be a deviation caused by certain family constellations. Until the 1970s, many psychoanalysts did not discuss the bisexuality thesis and viewed homosexuality as a mental illness .

It is difficult to estimate how high the proportion of bisexuality in the population is. Statements in the literature vary widely. The Kinsey Report is often cited, which in 1948 classified around 46% of the male population as "to a certain extent bisexual". In fact, bisexual orientations are rarely lived out. Some sexologists explain this with the enforcement of a monosexual norm or heteronormativity in our culture.

A British study by the polling institute YouGov from 2015 found a share of 19% bisexual (people who rate themselves on the Kinsey scale in the range of 1 to 5), among 18 to 24 year olds even 43% are bisexual. Only 2% of the respondents use the term "bisexual" for themselves. A study by the University of Essex led by Gerulf Rieger came to the conclusion that 74% of women who describe themselves as heterosexual and 82% of all women are bisexual. The research examined physical responses (such as dilated pupils) to viewing naked people in videos. The TAZ editor Saskia Hödl pointed out in a comment that in another study similar physical reactions could also have been detected when watching videos of copulating monkeys.

A Swedish study of identical twins from 2008 sees a complex relationship between various factors that control sexual orientation . The study comes to the conclusion that the expression of this orientation in men has a genetic influence of about 35% (women about 18%); however, it is unclear what other factors also play a role. What seems certain, however, is that early childhood experiences or upbringing play no role at least in the development of male sexual orientation.

Researchers from Denmark and the United States published an article in Archives of Sexual Behavior magazine in 2017 in which they concluded that women and men who were exposed to the hormone progesterone before birth are more likely to be bisexual.

A controversial study of bisexual men in the USA published in 2005 came to the conclusion that bisexual self-designation only means sexual preference for two genders in about two percent of cases. Three quarters of the subjects designated as bisexual are homosexual, the rest are heterosexual. The basis of this statement was the sexual arousal of the penis, measured by an apparatus, while viewing erotic image material that showed either men or women. The investigation received public attention following a report in the New York Times . The study is rejected by the National Gay and Lesbian Task Force , which pointed out methodological weaknesses. In addition, the organization Fairness and Accuracy in Reporting (FAIR) criticized the New York Times had failed to draw attention to previous publications by co-author J. Michael Bailey. In the past, he had advocated the right of parents to exclude homosexual offspring with the help of eugenics as soon as this was technically possible.

Bisexuality in other cultures 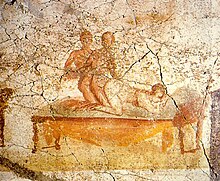 Bisexual intercourse, depicted on a Roman fresco from Pompeii (79 AD)

Sexual relationships were relatively openly referred to by their name in Islam. The term sihaq (dt. "Rubbing") was used as a term for the sexual practice of tribady . In literary terms, the love between two women was not constructed as a contradiction to marriage, although some lawyers viewed tribadia as a criminal extra-marital activity. Their proof by the four eyewitnesses required by Sharia law was practically impossible, so that this prohibition remained purely theoretical.

Bisexuality in the Animal Kingdom

Bisexuality is relatively common in the animal kingdom. The bonobos , for example, are a completely bisexual species that is best known for its pronounced lesbianism . A multifunctionality of sexual behavior that goes beyond the multiplication is assumed here.