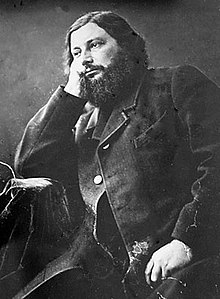 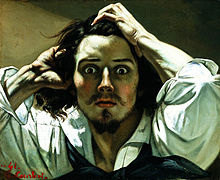 Gustave Courbet was born in Ornans, the oldest child of a wealthy farming family with large estates. After a very poor education he came to the Collège Royal (high school) in Besançon in 1837 . At the age of 14 he was initiated into the basics of painting by Professor Pére Baud from Ornans. During his high school he continued attending a private drawing school with Charles-Antoine Flajoulot (1774-1840). He made four lithographs as an illustration for a volume of poetry by Max Buchon (1818–1869) as a first major work in 1839 . At the request of his parents, he studied law at the University of Paris from 1840 . However, he soon devoted himself entirely to drawing and developed his technique by copying the works of art there, mainly by Spanish and Dutch masters, in the Louvre and other museums. Among the French painters, he particularly admired Gericault and Delacroix. He particularly enjoyed spending time in Carl von Steuben's studio or at the Academie Pere Suisse.

At this time, Gustave Courbet was still looking for style and forms of expression. In 1841 he created several self-portraits in which he emphatically portrayed himself as “The Desperate”. He tried to have his first works included in the Paris Salon , but only three of his 20 pictures submitted were accepted between 1841 and 1847, including his self-portrait with a black dog, completed in 1842 . Although he was still living on the financial support of his family, he decided in 1844 against his father's will to paint. Shortly before he left home, he painted the very idiosyncratic portrait of his little "sister Juilette". He then embarked on his artistic career with unshakable self-confidence and tenacity. On a trip to Holland in 1847, he made studies of Rembrandt's paintings as well as of Venetian and Spanish masters. These works are still tied to a certain romanticism, but already show future strength. In 1847 he had a son with his lover Virginie Binet, but she left him in 1850 and took the boy with her.

Gustave Courbet met around the corner is from his studio Brasserie Andler, the " temple of the realism " as it champfleury , called his friend and art critic, with other artists and intellectuals such as Charles Baudelaire , Pierre-Joseph Proudhon and Max Buchon , with whom he had been friends with since childhood. In this round the new artistic trend of realism developed .

In 1848, after Louis Philippe's abdication , the Paris Salon was held without a jury, and Courbet exhibited ten of his paintings, which were enthusiastically received by critics. In 1849 “Der Steinklopfer” was created, which led to incomprehension and sometimes scandals, but Gustave Courbet also received a gold medal for his painting After the meal in Ornans . The picture was then acquired by the French state. He now painted many scenes from Ornans as well as portraits of his family and friends. A funeral in Ornans , rejected by critics of the salon in 1850/51 because it offended religious feelings, is now considered the most impressive example of this creative period. Courbet's fame grew from the sensation he caused. His pictures were suspicious of the new bourgeois regime in their realism, which made simplicity worthy of picture. The apparent threat grew from the interpretations that Pierre Proudhon, among others, gave his pictures, even if Courbet probably never intended this himself. Some of his works border on L'art pour l'art .

Gustave Courbet developed into the main representative of realistic painting in France and thus had a far-reaching influence on the development of subsequent painting, especially on the realistic painters in Germany. But during this time he also established his reputation as an avant-garde painter.

The counter-exhibition to the Paris Salon

In 1853, the Courbet government held out the prospect of painting a large-format picture for the 1855 World's Fair if he submitted a draft to a jury for assessment beforehand. Courbet refused, however, because he did not want to be curtailed in his artistic freedom. After three of the fourteen pictures he submitted for the exhibition were rejected for the world exhibition (including the allegory The Artist's Studio ), he built his own Pavillon du Réalisme on Avenue Montaigne with the financial support of his friend and sponsor Alfred Bruyas . In this, in addition to the eleven shown at the world exhibition, another forty paintings were shown. This also included “Das Atelier”.

Gustave Courbet's paintings, which were painted after 1860, show an egalitarian surface structure. The colors were distributed on the canvas regardless of the object and the spatial depth of view. In this way he achieved that the dominant objects leveled out in their dominance: the landscape was no longer subordinated to nature and the figure no longer subordinated to the landscape. All elements of the picture were optically combined on one spatial level. Courbet alternately used the spatula with the brush, creating a relatively even, only slightly pasty surface. This technique was taken up in a modified form by other artists, including Oswald Achenbach .

With his picture "Return from the Conference", which was created in 1863, he caused a new scandal. The work showed tipsy, confused clergy straying on a country road. For the salon it was refused "because of a violation of religious morality", even entry for the painting in the Salon des Refusés ("Salon of the Rejected") was refused. A short time later the picture disappeared because it was probably bought up by a contemporary in order to destroy it. In the following year, a picture of him, “Venus and Psyche”, was rejected by the jury. Another provocative work was created in 1866, "The Origin of the World". The client was the diplomat Khalil-Bey (1831–1879). The attraction of this painting lies in the fact that Courbet allowed himself a previously unattained boldness and openness. No historical or literary device distracts from the quasi-anatomical representation of the female sex. It is thanks to Courbet's masterful art, its fine amber color scale, that it has nothing of a pornographic image. But that seemed to be the reason why it was withheld from the public for many decades.

His friends had been arrested or exiled during the revolutionary situation in Paris, or had developed politically in other directions. So Courbet decided to travel extensively. He first came to Frankfurt , where the art academy gave him his own studio. Even after his departure, Courbet remained famous in Frankfurt, many Frankfurt citizens, bankers and merchant families were among his customers.

The next destination was Trouville-sur-Mer , where he painted pictures of the lake and portraits of the local beauties and was able to sell them profitably. It was there that he met the painter James McNeill Whistler and his lover Joanna Hifferan . It was followed by Étretat , where he met the young Claude Monet .

Gustave Courbet exhibited in Germany, Belgium and England and received numerous awards. The Cross of the Legion of Honor , which he and Honoré Daumier were offered in 1870, both refused. They took the view that the state should not have any influence on artistic issues. This attitude made Courbet many friends in the republican camp, and after the fall of the government he was elected President of the Republican Art Commission in 1869 and a city council member and thus a member of the Paris Commune the following year .

Death mask in the Courbet Museum 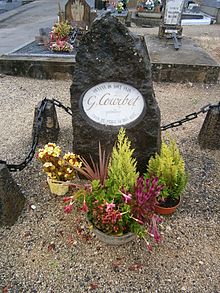 Following the violent dissolution of the commune, Courbet was sentenced to six months in prison and a fine of 500 francs for his involvement in the destruction of the Colonne Vendôme . He was serving his sentence in the Sainte-Pélagie prison in Paris, but was allowed to paint there. His health deteriorated in the years that followed. In the Neuilly clinic he painted 50 pictures, all of which he was able to sell. In May 1873 the new French government demanded compensation for the destroyed Colonne Vendôme in the amount of 335,000 francs; he fled with his pupil and assistant Cherubino Patà to Switzerland , to the Jura he was familiar with and then to Lake Geneva , with no hope of raising the enormous sum demanded by selling pictures. During his exile, the French state confiscated his property. He and his friends and family were monitored.

He spent his last years in La Tour-de-Peilz , always hoping for debt relief . Gustave Courbet barely created works worthy of him and became increasingly addicted to alcohol. Although he still took part in art exhibitions in Geneva, Lausanne, Neuchâtel and other places in Switzerland, he tried to get rid of at least part of his debts through a kind of industrial use of his painting art. But money worries and legal proceedings never left him. Finally, he suffered from heart failure and dropsy and died on December 31, 1877. He was also buried in La Tour-de-Peilz. His remains were transferred to Ornans exactly 100 years later.

Numerous works by Courbet are exhibited in the Musée Courbet Ornans. 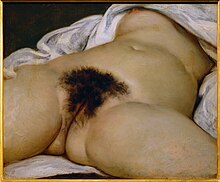 The artist's studio  | A funeral in Ornans  | The woman in the waves  | Jo, the beautiful Irish girl  | The origin of the world  | The sleepers - indolence and lust