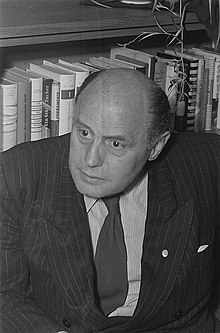 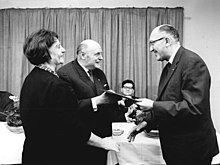 Ferdinand May (center) with his wife Käte, 1966

Ferdinand May (born January 16, 1896 in Pfungstadt ; † November 8, 1977 in Lindenfels , Odenwald) was a German furniture dealer, dramaturge and author.

Käte and Ferdinand May gravesite in the south cemetery in Leipzig

May, son of a calibration master and master brewer at the Pfungstädter brewery, grew up in Offenbach am Main , attended secondary school and completed a commercial apprenticeship. He went into the First World War as a volunteer in 1914 , was wounded several times and returned in 1918 as a passionate opponent of the war. In 1920 he joined the Social Democratic Party of Germany (SPD). He did social and settlement work in Upper Hesse, then theater work at a traveling theater. After leading commercial activities in Frankfurt am Main and Wetzlar , Ferdinand May advanced in 1926 to director of Leipziger Hausrat GmbH , a municipal company for the inexpensive supply of the working population with furniture. In 1932, at the age of 36, he became the managing director of the collective of young actors in Leipzig. At this time he began his first literary attempts for radio, cabaret and agitprop groups.

During the time of National Socialism he was again active in business from 1933 and repeatedly subjected to house searches and interrogations. During the Second World War he had to do military service as a soldier in the Wehrmacht . His son Ulrich fell, and in 1945 he was taken prisoner by the Americans .

After his release he went back to Leipzig and became a co-founder of the Kulturbund for the democratic renewal of Germany . He began to write his first radio plays. With Joachim Werzlau he founded the literary cabaret Die Rampe and took over the management of the young actors' studio and the Leipziger Volksbühne. From 1948 to 1951 he acted as senior advisor for theater in the Ministry for Public Education of Saxony-Anhalt in Halle (Saale) . Finally, in 1951, he was appointed chief dramaturge at the Städtische Theater in Leipzig , which he did until 1956. From 1955 to 1959 he was a candidate for the federal board of the Free German Trade Union Federation (FDGB) and from 1956 to 1959 chairman of the Leipzig district board of the art union. Freelance writer from 1959, Ferdinand May developed a lively literary activity. Radio plays, plays and novels were part of his repertoire.

May died on a trip to his home in Hesse. He was buried on November 17, 1977 in the Leipzig South Cemetery. May's daughter Gisela May (1924-2016) was an important chanson interpreter ( Bertolt Brecht , Hanns Eisler , Kurt Weill ) and actress.