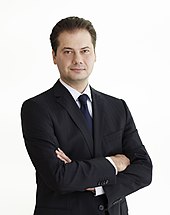 Max Hollein (born July 7, 1969 in Vienna ) is an Austrian curator and museum director. In August 2018 he took over the management of the Metropolitan Museum of Art in New York City .

Max Hollein was born in 1969 in Vienna as the son of the architect Hans Hollein and his wife Helene Hollein . He studied business administration at the Vienna University of Economics and Art and art history at the University of Vienna . During this time he worked, among other things, as a freelancer for the business editor of the daily newspaper “ Der Standard ”. After successfully completing both studies in 1994/95, he moved to New York , where he worked as a project manager for exhibitions at the Solomon R. Guggenheim Museum . From 1996 to the end of 2000 he worked closely with Guggenheim Director Thomas Krens , initially as "Executive Assistant to the Director" and from 1998 as "Chief of Staff and Manager of European Relations" - responsible for key projects such as the construction of the exhibition halls “Deutsche Guggenheim Berlin” and “Guggenheim Las Vegas”, for exhibition tours, opening activities of the Guggenheim Museum Bilbao and for contacts with European cultural institutions, collectors , media, curators and sponsors.

Hollein is married to the fashion designer and author Nina Hollein. The couple has three children.

Max Hollein was director of the Schirn Kunsthalle, which was under his artistic and commercial direction from October 2001, and director of the Städel and the Liebieghaus since January 2006. The highlights of his program at the Schirn, which he has repositioned nationally and internationally, include the exhibitions "Frequencies [Hz] - Audiovisual Spaces", "Shopping - 100 Years of Art and Consumption", "Henri Matisse: Drawing with Scissors" , “Communism Dream Factory - The Visual Culture of the Stalin Era”, “Yves Klein”, “The Naked Truth - Klimt, Schiele, Kokoschka and Other Scandals”, “Op Art”, “Impressionists. Berthe Morisot, Mary Cassatt, Eva Gonzalès, Marie Bracquemond ”,“ Georges Seurat. Figure in Space ”,“ Edvard Munch - The Modern View ”and in cooperation with the Liebieghaus sculpture collection“ Jeff Koons. The Painter & The Sculptor ". For years, the Schirn has been one of the most popular art institutions in the Rhine-Main region.

The Liebieghaus sculpture collection under the direction of Max Hollein experienced the largest infrastructure measure since 1990: the collection areas from the Middle Ages to Classicism and East Asia as well as the attic, which was redesigned to studio rooms, have been presented in a completely changed color, light and communication concept since 2008. The exhibition “ Colorful Gods. The colors of ancient sculptures ”became one of the most successful exhibitions in the history of the Liebieghaus. The redesign came to an end in spring 2009 with the reorganization of the antiquity collection, which now also includes works of classicism, and the opening of a newly created display depot. Exhibitions such as “Jean-Antoine Houdon. The Sensual Sculpture ”(2009),“ Sahure - Death and Life of a Great Pharaoh ”(2010),“ Niclaus Gerhaert. The Sculptor of the Middle Ages ”(2010/11) and in cooperation with the Schirn Kunsthalle“ Jeff Koons. The Sculptor “(2012) ensure that the Liebieghaus attracts additional audiences.

Max Hollein had introduced numerous new exhibition formats at the Städel since the beginning of his career: from small, selected cabinet exhibitions, including those on Wilhelm Lehmbruck , Martin Kippenberger and Andrea Mantegna, to the “Constellations” series with works of contemporary art from the Städel collection, to major overview shows such as "Gardens", "Albrecht Dürer: The Prints", "Witches' Lust and the Fall of Man." The strange fantasies of Hans Baldung Grien ”,“ Cranach the Elder ”,“ The Master of Flémalle and Rogier van der Weyden ”,“ Ernst Ludwig Kirchner. Retrospective ”,“ Beckmann & Amerika ”and the large, internationally acclaimed exhibition“ Botticelli ”. With 367,000 visitors, it was by far the most successful show in the history of the Städel.

The largest structural expansion of the Städel was also carried out under Max Hollein. At the end of 2011, the Old Masters and Modern Art collections were reopened after extensive renovation. In February 2012, an underground extension - the garden halls - was opened with an additional 3000 m² collection area for contemporary art. In the course of a large-scale campaign in which the city of Frankfurt, the state of Hesse, well-known companies, foundations and countless citizens participated, the Städel Museum was able to cover the total costs of 52 million euros for renovation and expansion, half from private and the other half Financed from public funds. In addition, the museum's holdings in all areas of the collection are continuously expanded through acquisitions and donations. Under the leadership of Max Hollein, the Städel Museum was able to significantly expand its holdings. Between 2006 and 2012, 1,200 newcomers came to the Städel alone.

In addition to his work as a director, Max Hollein was commissioner and curator of the American pavilion at the 7th Venice Architecture Biennale in 2000, commissioner for the Austrian pavilion at the Biennale di Venezia 2005 and curator of the Salzburg avant-garde festival “kontra.com” on the occasion of the Mozart year 2006 He is a member of various juries and advisory committees, including a member of the supervisory board of the “Kulturveranstaltungen des Bundes in Berlin GmbH” ( Berlin Festival , Berlin Film Festival , Martin-Gropius-Bau , House of World Cultures ). Curator of exhibitions such as “Shopping”, “ Jonathan Meese ”, “ Julian Schnabel ”, “3 '”, “ Carsten Nicolai ” and editor of numerous exhibition catalogs. Hollein has written a wide range of publications and lectures on contemporary and modern art, as well as on museums. In 1999 his book “Contemporary Art and the Art Market Boom” appeared, in 2006 the publication “Enterprise Art. Developments and Entanglements ”in the Statement series.

Max Hollein is a member of the Board of Trustees of the Giersch Foundation and a member of numerous supervisory and advisory bodies of international cultural institutions, including the Hermitage (Saint Petersburg) , the Palais de Tokyo in Paris, the Istanbul Modern , the Neue Galerie New York , the Ludwig Foundation and the Bundeskunsthalle in Bonn.

Directors of the Städel Art Institute