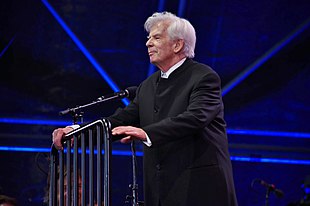 Christoph von Dohnányi at the Festival of Joy 2016

Dohnányi is the son of the lawyer and later resistance fighter Hans von Dohnanyi and Christine Bonhoeffer , the sister of Dietrich Bonhoeffer . He attended the St. Thomas School in Leipzig , where he was a member of the St. Thomas Choir , the Benedictine high school in Ettal and the Victoria High School in Potsdam . Like his brother, he first studied law at the Ludwig Maximilians University in Munich , then switched to composition , piano and conducting at the Munich University of Music and Theater , then housed in the Villa Stuck, where he completed his studies with the distinction of Richard Strauss Price completed. He then continued his education with his grandfather Ernst von Dohnányi , pianist, composer and conductor, at Florida State University and took a conducting course in Tanglewood, where he met Leonard Bernstein .

He turned down offers from Bernstein in New York and László Halász in Hollywood. Instead he returned to Germany and in 1953 became Georg Solti's assistant at the Frankfurt Opera . At the age of 27 he was appointed the youngest general music director in Germany at the Lübeck Theater . From 1963 to 1966 he was GMD of the Kassel State Theater . From 1964 to 1969 he directed the Cologne Radio Symphony Orchestra . From 1968 he was general music director and from 1972 also director of the Frankfurt Opera and the Frankfurt Opera House and Museum Orchestra . From 1977 to 1984 he worked as artistic director and chief conductor of the Hamburg State Opera and general music director of the Hamburg Philharmonic State Orchestra . From 1982 to 1984 von Dohnányi was Music Director Designate of the Cleveland Orchestra and was its sixth Music Director, a position he held from 1984 to 2002. In September 2002 the Cleveland Orchestra named him its first Music Director Laureate. From 1997 to 2008 he was Principal Conductor and Artistic Adviser of the Philharmonia Orchestra in London, whose first guest conductor he had been since 1994. In 2008 he became Honorary Conductor for Life of the Philharmonia Orchestra. From 1998 to 2000 he was chief conductor and artistic advisor of the Orchester de Paris . From September 2004 until the end of the 2010 season he was chief conductor of the NDR Symphony Orchestra , now the NDR Elbphilharmonie Orchester . Since 2002 von Dohnányi has been a regular guest with the New York Philharmonic Orchestra , Boston Symphony Orchestra , Cleveland Orchestra, Philadelphia Orchestra, Chicago Symphony Orchestra, Los Angeles Philharmonic, Kansas City Symphony , National Symphony Orchestra in Washington DC He is regularly in Tanglewood, the Summer Festival of the Boston Symphony Orchestra, where he also works with the Tanglewood Music Center Orchestra, the student orchestra. He has also conducted the orchestras of the Julliard School in New York, the New England Conservatory in Boston, the Curtis Institute in Philadelphia, the Cleveland Institute of Music and the Civic Orchestra of Chicago.

Dohnányi, who found artistic comrades-in-arms with Gerard Mortier, Peter Mario Katona and Klaus Schultz in Frankfurt for his idea of ​​dusting off the opera and music theater, is also close to new music , so in addition to numerous orchestral works a. a. by György Ligeti, Harrison Birtwistle or John Adams also premiered by Hans Werner Henze's The Young Lord (1965) and The Bassariden (1966) and Friedrich Cerhas Baal (1981).

Christoph von Dohnányi was married to the actress Renate Zillessen and then to the singer Anja Silja and is married to Barbara Koller for the third time. He has five children. His son from his first marriage Justus von Dohnányi (* 1960) is an actor. His brother is the politician Klaus von Dohnanyi .

Dohnányi is Commandeur de l'Ordre des Arts et des Lettres , recipient of the Bartók Prize (Hungary), the Goethe plaque of the city of Frankfurt am Main , the Hamburg Art and Science Prize and the Great Cross of Merit of the Federal Republic of Germany and the Great Silver Medal for Merit around the Republic of Austria (1992). He also holds honorary doctorates from Kent State University , Case Western Reserve University , Oberlin College , Eastman School of Music and the Cleveland Institute of Music . In 2013 he was awarded an honorary doctorate from the Royal Academy of Music at London University.