Childhood and youth, life until 1945

Henze was born the first of six children to the teacher Franz Henze (1898–1945) and his wife Margarete Adele (née Geldmacher, 1907–1976) and showed an early interest in art and music. As a teenager, because of his political attitudes, he came into conflict with his father, who was a member of the NSDAP and wanted to send him to a Waffen-SS music school . When Hans Werner Henze's homosexual inclination became apparent, his father is said to have said that “something like him belongs in the concentration camp”. 1942 Henze began studying at the State Music School Braunschweig in the subjects piano and drums . At the beginning of 1944 he was called up for the Reich Labor Service , a few months later as a radio operator for the Wehrmacht . The experiences of this time led to a feeling of complicity, but also to a lifelong passionate rejection of war and fascism.

After a brief British captivity , Henze became a répétiteur at the Bielefeld City Theater in 1945 . From 1946 he continued his studies with Wolfgang Fortner at what was then the church music institute in Heidelberg and in Fortner's domicile in the Villa Braunbehrens , and at the age of 23 he was dubbed "his best student" by the press. Fortner, however, refused to teach Henze the twelve-tone technique : he called it "done", whereupon the student taught himself Schönberg's composition technique before studying it in 1949 with René Leibowitz in Darmstadt and Paris. In his first compositions, Henze actively dealt with the twelve-tone technique, but linked it with neoclassical style, for example in the 1st Symphony and the 1st Violin Concerto (1947).

In 1948 Henze became Heinz Hilpert's musical assistant at the Konstanz Theater , and his first opera Das Wundertheater (based on Miguel de Cervantes ) was written. In 1950 he moved to the Hessisches Staatstheater Wiesbaden as artistic director and conductor of the ballet . After two radio operas as well as several symphonies and solo concerts, he finally established himself as one of the leading composers of his generation with the full-length opera Boulevard Solitude , which premiered in Hanover in 1952 and is a modern version of the Manon Lescaut material .

Disappointed by two things - by the politically restorative climate in West Germany and by parts of the criticism that, under the influence of the Darmstadt holiday courses , demanded consistent serial music (which Henze felt as a restriction of creativity) - he moved to Italy in 1953. First he moved to Forio on Ischia , where he maintained lively contact and exchange with the intellectual colony located there (including Wystan Hugh Auden , Golo Mann and William Walton ). From 1956 he lived in Naples , later in Rome and Castel Gandolfo , until he finally found his permanent residence in Marino in the Alban Hills . 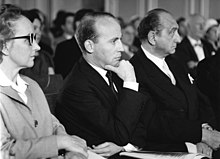 A close friendship connected him with the poet Ingeborg Bachmann , with whom he lived for a time. Bachmann wrote the libretti for his operas The Prince of Homburg (1958; after Heinrich von Kleist ) and The Young Lord (1964; after Wilhelm Hauff ), Henze the music for her radio play Die Zikaden (1954). Together they created the night pieces and arias (1957) and the songs from an island (1964).

In 1964 he met the twenty-year-old Fausto Moroni, whom he would later make his adoptive son; both formed a community until Moroni's death in 2007.

Henze joined the Communist Party of Italy (KPI) ; His political commitment made headlines in Germany, for example in 1968, when the premiere of the oratorio Das Raft der Medusa (with text by Ernst Schnabel ) failed because West Berlin participants did not want to appear under a portrait of Che Guevara and a red flag , or in 1969/70, when he demonstratively took over a teaching position in Havana and conducted the world premiere of his 6th symphony. During this time, the recital El Cimarrón was written , in which he interprets the life story of a runaway slave together with the librettist Hans Magnus Enzensberger . With the opera We Come to the River by Edward Bond , Henze's socially critical art reached another high point in 1976.

As the first festival for the dissemination of new music , Henze founded the Cantiere Internazionale d'Arte in Montepulciano in 1976 , where his children's opera Pollicino was premiered in 1980 . From 1980 to 1991 he led a composition class at the Cologne University of Music . He founded the Mürz Valley Music Workshops in 1981 , the Deutschlandsberg Youth Music Festival in 1984 and finally the Munich Biennale in 1988 , an "International Festival for New Music Theater", whose artistic direction he handed over to Peter Ruzicka in 1996 . Meanwhile, his own operas were oriented more towards traditional forms again, such as The English Cat (1983, libretto by Edward Bond) and The betrayed sea (1990, libretto by Hans-Ulrich Treichel based on the novel Gogo no Eiko by Yukio Mishima ).

Human and political commitment also shape his later works. Henze wrote the so-called Requiem (1992), consisting of nine sacred concertos for piano, trumpet and chamber orchestra, in memory of the musician Michael Vyner, who died early; the 9th Symphony for mixed choir and orchestra (1995–1997) with verses by Hans-Ulrich Treichel based on the novel The Seventh Cross by Anna Seghers is an examination of German history. At the invitation of Walter Fink , Henze was the tenth composer in the annual composer portrait of the Rheingau Music Festival in 2000 . Among other things, his Requiem was performed.

New stage works by Henze were also performed afterwards: at the Salzburg Festival in 2003 L'Ùpupa and the Triumph of Son's Love and in 2006 the third, definitive version of Gogo no Eiko ( The betrayed sea , under Gerd Albrecht , who asked the composer to continue working on the work had motivated). The premiere of the concert opera Phaedra (libretto: Christian Lehnert ) took place on September 6, 2007 at the Berlin State Opera Unter den Linden ; it was played by the Ensemble Modern under the direction of Michael Boder . During the work the composer suffered a severe attack of weakness in 2005; Shortly after the completion of the work, his partner and adoptive son Fausto Moroni (1944–2007), whom he met in 1964 in an antique shop, died in April 2007.

Until the 1990s, Henze conducted regularly, mostly his own works, and - more rarely - also staged. He has u. a. worked with his youngest brother, the set designer Jürgen Henze (* 1942), who was also assistant set designer for films by Rainer Werner Fassbinder ( Berlin Alexanderplatz ) and Andrzej Wajda ( Eine Liebe in Deutschland ) . 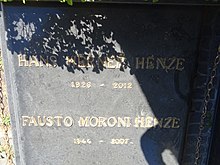 Already badly marked by old age and illness, he was able to attend the oratorio Das Raft der Medusa (conducted by Simon Rattle ), which was performed again on the occasion of his 80th birthday in 2006 in the Berlin Philharmonic .

Hans Werner Henze died on October 27, 2012 at the age of 86 in Dresden. Shortly before, on September 13th, the first premiere of the 2012/13 season had taken place at the Semperoper with Henze's anti-war opera We reach the river - We come to the river in the presence of the composer. Henze's adopted home was Marino in the province of Rome, where he was buried on November 5, 2012.

Henze has always resisted the commitment to a certain style or technique. Contrary to the current of the so-called Darmstadt School, he renounced the strictly serial organization of his works and composed eclecticism . In 1967 he said: “Soon the clusters , the serial recitatives and the happenings will finally be exhausted, and the young composer will look in vain in such wasteland for food for his hungry soul.” An important role model for Henze was Igor Stravinsky , who turned to neoclassicism after his experimental phase .

The focus of Henze's work is formed by the stage compositions, which, thanks to the composer's enormous dramaturgical instinct and the mix of different musical styles and directions that are suitable for the stage, have become unusually large audiences for contemporary musical works. Open to musical and literary tradition and the present throughout his life, he developed classical models in dialogue with contemporary authors: Grete Weil worked on the Manon-Lescaut material for him , which the librettists of Massenet and Puccini had already taken up; together with Ingeborg Bachmann he discovered new potential in texts by Heinrich von Kleist ( The Prince of Homburg ) and Wilhelm Hauff . Other working partners for him were the writers WH Auden , Hans Magnus Enzensberger , Edward Bond , Hans-Ulrich Treichel and Christian Lehnert . His interest in "applied arts" and mass media also led him to film music; here he worked a. a. with the directors Alain Resnais and Volker Schlöndorff .

Henze was an explicitly political artist who never considered the apparently abstract technical aspects of composing as an end in itself, but as a possibility, e.g. For example, to take a stand by creating contrasts: the reactionary social class in the opera Boulevard Solitude is assigned a conservative tonality , while the outsiders Manon and Des Grieux are characterized as progressive by the twelve-tone technique; In We Come to the River , electronically amplified strings and low brass are assigned to the world of violence in extreme volume. Comparable conflicts emerge in the 9th Symphony; it is "dedicated to the heroes and martyrs of German anti-fascism".

Henze turned against the elitism of the classical cultural scene, but did not throw the burden of the educated bourgeois tradition overboard as obsolete, but presented opportunities for an enlightened, often playful and ironic examination of historical models from music, literature and painting. A few examples: In The English Cat , Henze based himself on Ludwig van Beethoven's Diabelli Variations ; in The Raft of Medusa, based on a libretto by Ernst Schnabel , he referred to the painting of the same name by Théodore Géricault ; in Tristan for piano, tapes and orchestra, an anonymous 14th century Florentine ballad and motifs by Richard Wagner , Johannes Brahms and Frédéric Chopin are processed; the ode to the west wind adapted the poem by Percy Bysshe Shelley ; the solo guitar works Royal Winter Music are musical portraits of the dramatic characters of William Shakespeare .

with a solo string instrument

with a plucked solo instrument

for string and keyboard instrument

for wind and keyboard instruments

for plucked and keyboard instruments

Trios for a mixed cast

Quintets for a mixed cast

For solo voice and one instrument

Voice (from tape) and drums

For solo voices and 2–5 instruments

For solo voices and ensemble / orchestra

For solo voices / a cappella choir

For choir and ensemble / orchestra 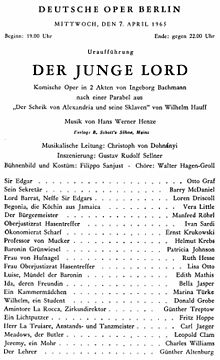 Part 1: The embarkation for sinking - Part 2: The ninth night and the morning

Films in which music by Henze is quoted:

In courses, Hans Werner Henze encouraged young people, laypeople and students to invent new pieces together and bring them to the stage. The results of this regional and communal cultural work were a .: