The happening (from English to happen ' to happen ') is one of the most important forms of action art of the 1960s , alongside Fluxus . A happening is an event improvised directly with the audience. One of the early forms of the happening is the dé coll / age happening. This includes throwing objects into the audience, exhibitionism , orgies of blood and color, destroying, tearing up, dirtying objects. The aim is the shock effect caused by a wide variety of actions on an audience that is involved in the event. This is part of the action devised by the artist. It is included in the artistic activities, whereby the course of events is not determined in advance. Depending on the reaction of the audience, improvisation can take place in different ways (although happenings are rarely completely improvised, but rather rehearsed beforehand). This also means that happenings usually do not have a fixed time frame, often the audience doesn't even know when the happening is over. Another feature of the happening is the use of different objects and their accidental or deliberate juxtaposition, which is also a basic principle of surrealism . 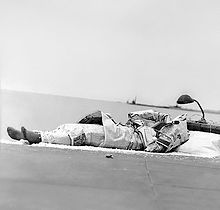 The term was first used by Allan Kaprow in 1959 for an action in New York's Reuben Gallery , which consisted of 18 happenings in six parts. There were three rooms, which were separated by plastic film and in which the events took place at the same time. However, Kaprow had already used the term in his 1958 essay "The Legacy of Jackson Pollock", where he made a prognosis for the art of the post-Pollock generation.

The aim of the happening artists was to expand the traditional concept of art and to connect art with everyday life. Everyday actions should be made clear to people and thus abstracted. The boundary between Fluxus and Happening cannot be precisely defined, as some artists orientate themselves towards and participate in both forms of action.

Happening and Fluxus in the Rhineland in the 1960s

In the 1960s an overarching and revolutionary cultural and intellectual movement developed in the Federal Republic of Germany, which, self-confident and committed by personalities such as Joseph Beuys , Wolf Vostell and the Korean Nam June Paik , could be experienced primarily in Cologne and which revolutionized art. The happenings, which created critical confessions of the time due to their provocative motivation, quickly found a crowd of supporters. The extravagance, the political and sociological references and visionary prophecies were ingredients of Wolf Vostell's happenings. These events, which included all the senses in the happening and in the Fluxus concerts, the commitment of Beuys and Vostell, the luminaries of this art evolution, were still unacceptable for many art lovers at that time.

The Happening and Fluxus activists were convinced of the ability of people to take part in the Happenings and Fluxus campaigns to draw on their own resources and to “perfect” themselves through creativity. The participation of the audience is part of the happenings. In the Rhineland, Beuys, Vostell and Paik stylized themselves freely and autonomously into well-known happening artists through the video art they developed . If you look at the international art markets from the 1970s to the present day, the influence of the Happening and Fluxus movements is unmistakably diverse.