Volker Schlöndorff (born March 31, 1939 in Wiesbaden ) is a German film director , screenwriter and film producer who is best known for his literary adaptations . In 1980, his feature film The Tin Drum was awarded an Oscar in the category Best Foreign Language Film .

Volker Schlöndorff grew up in Schlangenbad in the Taunus and later attended high school in his place of birth. Following a student exchange , he continued his school education in France from 1955. Schlöndorff first went to a liberal Jesuit boarding school in Brittany Morbihan and closed then the school in Paris at the elite school " Lycée Henri IV " in the Latin Quarter with the baccalaureate from. His classmate and seatmate was the later director Bertrand Tavernier . While his brothers followed their father's career and became doctors, he studied law in Paris for the purpose of granting scholarships up to the state examination. On the side he went to the Cinémathèque française in the nearby Rue d'Ulm up to three times a day . There he met the directors of the Nouvelle Vague . After a year of preparation for studying at the film school Institut des hautes études cinématographiques (IDHEC), he was selected as one of eleven out of 300 applicants, but he no longer took part in the course because he worked with Louis Malle as his assistant director at Zazie dans le Métro (1960) could work.

After the Oscar success of his film adaptation of the Tin Drum , he worked in the United States with the intention of spending the rest of his life there. With the fall of the Berlin Wall , he changed his life plans and moved from New York City to Berlin and Potsdam. At the age of 60, he began running regularly for one or two marathons a year. "Marathon saved me," said Schlöndorff.

From 1971 to 1991 Volker Schlöndorff was married to the actress and director Margarethe von Trotta . At the beginning of the marriage she worked with him as an actress, assistant director, co-director and co-writer. They directed the Katharina Blum film together. Schlöndorff was married to the cutter Angelika Gruber (approx. 1953 - December 24, 2018) for the second time since 1992 , with whom he has a daughter (* 1992).

Schlöndorff was heavily criticized by the CDU / CSU and the print media of Axel Springer Verlag in 1977 for his support for the “Legal Aid Fund for the Defense of Political Prisoners” and for the political and social statements of his 1975 film Die Lost Ehre der Katharina Blum . The criticism resulted in his resignation from the administrative board of the Filmförderungsanstalt, to which he belonged from 1974 to 1978 , at the suggestion of the SPD parliamentary group of the German Bundestag. Schlöndorff was close to the SPD for decades, but he denied membership. Following a request from Fritz Teufel , he and his wife supported the former Foreign Legionnaire and later anarchist Peter Schult , who had been imprisoned several times for homosexuality and pedophilia, in the 1970s and 80s .

Despite his closeness to the SPD and the CDU's criticism of himself during the German Autumn , Schlöndorff publicly confessed to the CDU candidate for Chancellor Angela Merkel during her election campaign in 2005 . At the end of January 2007, Schlöndorff again spoke out in favor of the release from prison of the former RAF member Christian Klar , who had been imprisoned since 1982 and had submitted a pardon to the Federal President at that time .

In 2009 Schlöndorff again supported Chancellor Angela Merkel in the election campaign. In ARD television he expressed in an interview with WDR presenter Anne Gesthuysen something like: "Who is after 1989 still left must be a blockhead have." Schlöndorff referred this statement generally on "the left-wing ideology" and in particular to the “ Planned economy ” , which made people dependent and immature , which he was able to experience himself during the privatization of DEFA . Merkel will not divide society, but act in a social partnership . In 2010, in an open letter in the magazine Cicero , he recommended that Merkel return to her “real job” after her term of office had expired. 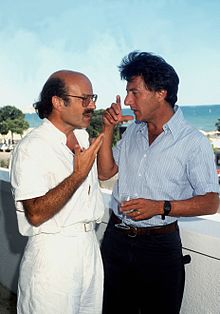 Schlöndorff with Dustin Hoffman at the Venice Film Festival , 1984

In 1960, Schlöndorff shot the short film Who cares about Algerians in Frankfurt under the pseudonym Volker Loki , which was not approved by the FSK because of its "partisanship against a friendly nation" . In 2007 he himself admitted to having been an active supporter of the Algerian liberation movement , a porter . He worked as an assistant to Ludwig Berger , Louis Malle , Jean-Pierre Melville ( Eva and the Priest , 1961) and Alain Resnais . In 1963/64 he wrote his first screenplay based on the novel The Confusions of the Zöglings Törless by Robert Musil . Schlöndorff shot the project from 1965 as a director under the name Der Junge Törless . Schlöndorff's first film was highly praised and received numerous awards. The film was awarded the Golden Ribbon in the categories of screenplay, direction and best film . The film was also awarded the Cannes Film Festival Critics' Prize. The film is considered to be the first international success of the young German film .

In 1969 Schlöndorff founded the production company Hallelujah-Film GmbH with Peter Fleischmann and in 1974 Bioskop-Film GmbH with Reinhard Hauff , with which he has since realized his productions under the direction of Eberhard Junkersdorf . With the film The Lost Honor of Katharina Blum, based on Heinrich Böll 's story of the same name , Schlöndorff first produced a great public success in 1975 together with his then wife Margarethe von Trotta.

In 1979 Schlöndorff made his international breakthrough with the film adaptation of Günter Grass ' novel of the same name , The Tin Drum . Awarded the Palme d'Or in Cannes in 1979 and the Oscar for best foreign language film , Die Blechtrommel marked the first high point in the international recognition of German film after the end of the Second World War. The shooting took place in Gdansk , among other places . In 2005, Schlöndorff returned to the Polish shipyard town to film the story of Anna Walentynowicz . The film was released in 2007 under the title Strajk - The Heroine of Danzig .

One of Schlöndorff's most interesting literary adaptations is Die Fälschung (1981) based on the novel by Nicolas Born . The film work with Bruno Ganz and Hanna Schygulla took place during the Lebanese civil war in Beirut. His film adaptation of Max Frisch's Homo faber premiered on March 21, 1991 . While this was widely recognized by German film buffs, it had to cope with heavy criticism in the USA. Max Frisch died two months after the shooting, shortly before his death he gave Schlöndorff his limousine , a Jaguar 420 .

Schlöndorff at the Frankfurt Book Fair 2011

Schlöndorff's next international directorial work was to be the film adaptation of the novel Die Päpstin in 2007 . He had worked on the project for seven years, partly privately and partly together with the production company Constantin Film . In July 2007, however, Schlöndorff criticized an "unholy alliance" of film and television producers in the Süddeutsche Zeitung , who increasingly mixed the different dramaturgies of a cinema and television film into a so-called " amphibious film " in order to reduce costs . Thereupon Constantin Film dismissed him on the grounds that he had violated the relationship of trust. His (general) criticism also harmed the planned production of The Popess. Schlöndorff used the time after the end, which he personally experienced as catastrophic, to write down his memoirs ("Light, Shadow and Movement"), which he wrote with the help of his diaries and notes.

In 2008 Schlöndorff prepared the feature film Gigola about the glittering world of Parisian revue theaters. In 2009 he staged Leo Tolstoy's last play And a Light Glows in the Dark (stage: Mark Lammert ) at Neuhardenberg Castle in Brandenburg with Angela Winkler and Hans-Michael Rehberg .

In his laudation on Schlöndorff on the occasion of the award of the Carl Zuckmayer Medal in 2009, the media scientist Thomas Koebner emphasized that his films were based on a great sense of justice. He always stands up for the disadvantaged, but in a subtle, unobtrusive way. His characters always know how to help themselves and are "always about to be transformed".

Volker Schlöndorff also produced many documentaries and was managing director of the Babelsberg film studio from 1992 to 1997 . Schlöndorff worked as a lecturer for the German Film and Television Academy in Berlin .

1992 handed Schlöndorff the documents of his films as a premature legacy to the German Film Institute / German Film Museum in Frankfurt am Main. After several years of viewing, indexing and editing, on March 31, 2014, Schlöndorff's 75th birthday, his collection was made available to the public as a “virtual exhibition” for the image-oriented medium of the Internet.