This article covers the type of car. For other terms of the same name, see Limousine (disambiguation) .

The term limousine is used differently in German.

Three early sedans; in the middle Panhard & Levassor type U1 (1906) 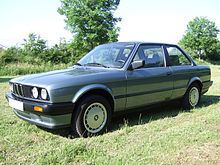 Chrysler 300C as a stretch limousine

The term sedan originally referred to a closed vehicle. A particularly luxurious type of carriage from the French region of Limousin was given this name. Furthermore, shepherds in the Limousin region had particularly thick coats made of goat hair. These were also called "Limousin" because of their local origin. From this combination (carriage and solid, protective fabric coat), this term was used in the early days of the automobile for such a body with a completely closed rear and a fixed roof that was extended at the front to the windshield. The sides of the chauffeur's compartment were open, and very early specimens didn't even have front doors. There were two to three seats in the rear and two emergency seats . As a rule there was another window on each side except in the rear doors; lacking this, then, the term found Town or - Panel - Brougham use. The early vehicle type, best comparable to today's (chauffeur) limousine, was called Berline and can be defined in two ways: on the one hand, a closed, four-door vehicle with a fixed roof, and often a small (oval) window in the C-pillar, as well usually two rows of seats in the rear and a partition to the chauffeur. A second variant relates to a self-propelled vehicle with two rows of seats and a shortened interior so that there was space outside for a suitcase above the rear axle.

It was not until the mid-1920s that closed sedans and coupés appeared on a larger scale, which, unlike touring cars, were initially also referred to as inner handlebars .

As a rule, the rear seated passengers experience more comfort than the chauffeur (see Daimler DS420 ). For a long time it was considered elegant to cover the front seats with (usually black) leather and to use valuable textile covers in the rear. The term berline went out of fashion in German and English at an early stage. Up until the early 1990s, there was a distinction between two- and four-door notchback sedans and three- and five-door, rarely two-door hatchbacks .

The term "limousine" was used to distinguish it from the convertible and the roadster . Variants of the classic notchback limousine are the hardtop limousine (with the B-pillar not pulled towards the roof or, very rarely, entirely without a B-pillar ) and the four-door coupé . This term overlaps with the sports sedan. Limousines with an extended middle section with often more doors and seats are stretch limousines .

Sometimes two-door sedans are referred to as coupes for marketing reasons.

Limousine in other languages

The term originally comes from French . There a distinction is made between the terms la limousine and la berline for two originally slightly different types. A berline was a particularly large and heavy version, usually on a long chassis and with a very wide body part between the front and rear doors, which occasionally carried an additional window. A two-door notchback version was often referred to as a coach in the past , a term that also occurs in English and American.

The Italian language calls a sedan berlina and, derived from this, the coupé also calls it berlinetta .

In American and Australian English and some other languages, a notchback sedan is referred to as a sedan or notchback sedan , a hatchback as a fastback sedan and a station wagon as a hatchback sedan , in British English a notchback sedan is called a saloon . Limousine referred to in English only four- and multi-door luxury vehicles with cutting disc for driver and stretch limousines . Two-door versions were often called Club Sedan in the past; however, the term overlaps with the Club Coupé and the two-door Brougham . When bodies with an integrated trunk prevailed in the 1930s, they were prefixed with "Touring" to distinguish them from the conventional versions with a spare wheel, luggage rack or both. Here the spare wheel was often in a compartment under the actual trunk. The name affix can be found in many manufacturers such as Cadillac , Chrysler , Packard or in bodyworkers such as Dietrich or Hooper . It was also used in the same way for correspondingly built coupes, sedans, sedans and convertibles. Packard was still using it for its four-door models in 1956, when there were no longer any models without a trunk. For American Ford, "Touring Sedan" was the designation for the best equipment line for a short time in the early 1990s.

In Spanish and Portuguese , on the other hand, these cars are called Sedans , influenced by American usage.

A special type of sedan are vehicles with a fixed roof but without a continuous center post, i.e. H. the B-pillar only holds the rear door and does not add to the stiffening of the body; if the rear door is hinged at the back, it can be omitted entirely. Such vehicles are "Faux Cabriolet" in English usage Two Door- respectively Four Door or hardtop called