from Wikipedia, the free encyclopedia
This is the spotted version , flagged on May 27, 2020 . There is 1 pending change that has yet to be viewed.

When driving through a ford , the fording depth is crucial

Off-road vehicles are automobiles for driving on difficult terrain away from paved roads . In the early years of the automobile, asphalt roads were the exception, so all vehicles had to have a high ground clearance. The first special off-road vehicles were the half-track vehicles from the 1920s by André Citroën . The best-known and most durable brands are Jeep and Land Rover , which, due to their practicality and versatility, have made the largest contribution to the spread of these vehicle classes since the 1940s. Other vehicle brands followed these examples and also launched their own models in the course of the company's history.

Today, all-terrain vehicles are mainly used by the armed forces , hunters , in agriculture and forestry and in off-road motor sports, as well as in regions whose transport infrastructure is poorly developed. Since the 1990s, SUVs and off-road vehicles have been increasingly used as lifestyle vehicles instead of normal passenger cars on paved roads.

This fad has been criticized for ecological reasons and because of the increased risk of accidents . 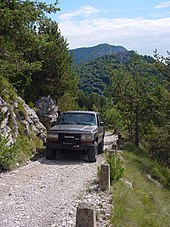 Some historic SUVs at Retro Classics 2018

Off-road vehicles are intended for use on very poor roads and in unpaved terrain. Therefore, above all, they have to be very robust and off-road. The off-road mobility is favored by a high ground clearance and short, often sloping body overhangs, which help to avoid touching down on steep inclines. Panels on the underbody, such as the so-called underrun protection, protect sensitive components such as the tank, engine, gearbox and differentials . Features such as all-wheel drive , often in conjunction with a selectable short terrain reduction ratio, as well as differential lock (s) , an articulated chassis (sometimes still with rigid axles ) and coarsely profiled off-road tires ensure safe propulsion . Similar to trucks , many off-road vehicles have a robust ladder, box or central tube frame with an attached, non-load-bearing body .

Sport utility vehicles (SUV) are related to off-road vehicles , with some structural and form features of off-road vehicles, but which are usually less off-road and robust. They usually have the self-supporting body and independent wheel suspension that are common in passenger cars and often lack differential locks and an off-road reduction. Many SUVs are also available without all-wheel drive.

Another related type of vehicle are the buoyant amphibious vehicles .

There are the following dimensions for off-road mobility

The Mitsubishi Pajero came on the market in 1982, the fourth and youngest generation (picture) has been built since 2007. The manufacturer won the Dakar Rally many times with the racing variants .

In European Law ATVs in to Directive 87/403 / EEC of 25 June 1987 supplementing Annex I to Directive 70/156 / EEC on the approximation of the laws of the Member States relating to the approval of motor vehicles and their trailers defined as vehicles of international class N1 (with a permissible total weight of up to 2 t) or M1 and the following equipment:

and if you can overcome a slope of 30% as a single vehicle, proven by invoice.

They must also meet at least five of the following six requirements:

According to § 42 StVZO, off-road vehicles are allowed to tow an increased trailer load in Germany , namely 1.5 times (other vehicles only the simple one) of the permissible total weight of the towing vehicle up to a maximum of 3.5 t (restriction: trailer coupling and overrun brake). However, if the vehicle is equipped with a hitch and a continuous brake system, more than 3.5 t may be pulled in Germany, but a C1E driver's license is required.

In Switzerland , depending on the vehicle type and homologation, between 500 and 1000 kg unbraked and up to 10 t braked trailer loads (e.g. Dodge Ram) are permitted. A trailer load of more than 3.5 t is only permitted with a continuous brake (e.g. compressed air brake system) and a hitch. The maximum permitted trailer load is entered in the vehicle registration document after the technical test . The train may be driven with the BE category, but the HVF applies .

Chains (including tracked vehicles ) are rarely used in off-road vehicles , which achieve enormous off-road capabilities at the expense of speed.

Again and again, larger SUVs come under criticism because of their increased danger for pedestrians in the event of collisions.

Children are particularly at risk from partially mounted front protection bars; accidents can be fatal even at low speeds.

The VCÖ and the ADAC have therefore appealed to have the front protection bars removed or not to have them installed. At the same time, the VCÖ points to the 50% increase in CO 2 emissions from off-road vehicles compared to cars .

Class M1 vehicles type-approved after October 1, 2005 may no longer be equipped with front protection bars according to an EU directive; after December 31, 2012, such vehicles may no longer be put on the market for the first time. Vehicles that already have a bullbar due to individual or type approval may keep it.

However, according to Euro NCAP, not all of the newer models have adequate pedestrian protection.

According to the Swiss materials testing institute EMPA, occupants of off-road vehicles are also exposed to a higher risk of accidents, as the high center of gravity in critical situations increases the risk of tipping over.

In addition to safety considerations, there is also criticism of off-road vehicles for ecological reasons. Due to the mostly larger vehicle mass and the design-related higher aerodynamic drag , the consumption is higher on average compared to a passenger car of the same size with a conventional design. This goes hand in hand with higher CO 2 emissions and a greater burden on resources.