The title of this article is ambiguous. Further meanings are listed under chain (disambiguation) .

A chain (from Latin catena , Old High German ketina , Middle High German keten ) - in the sense of series, group - is a stringing together of at least 3, movable, interlocking or articulated links, often made of metals such as steel (formerly iron , see also sponge iron ) is produced. From its invention in the Copper Age / Bronze Age until the 19th century, every metallic chain could only be produced by forging . Occasionally handcrafted up to the present day.

Chains come in many forms. Due to their mechanical properties and their ornamental effect , they are mainly used in two areas, in technology (see chain (technology) ) and as a decorative element (see chain (jewelry) ). In addition, the term chain is also used in a figurative sense, on the one hand for abstract facts, e.g. B. in mathematics see chain (function theory) , on the other hand for other phenomena of the physical-material-thing world, e.g. B. human chain or chain of branches .

History of the chain

Old, worn chain with light links, with a hook and a large ring (at the other end) for lashing cargo

The history of the chain began in the Bronze Age as a jewelry chain and for tying (in chains) prisoners of war, the later slaves or criminals for the neck, ankles and wrists. Chains were also used, for example. B. for hanging kettles , as well and later anchor chains . The first iron ship or anchor chains were made between 1400 and 800 BC. Found in the Assyrian Dur Sarrukin (today Khorsabad in Iraq ).

From this period at the latest, chains made of iron were an integral part of the Mediterranean region. The comparatively small number of finds can be explained by the corrosion of the iron. Evidence of this is available from art history (e.g. in the form of stone reliefs ) or from Greek mythology (e.g. the god of blacksmithing Hephaestus forges a heavy chain for Prometheus ).

So far, the first armor made of chains dates back to the 4th century BC. Found in Celtic graves. The practical chain armor was already used in the 3rd century BC. Adopted by the Romans under the name Lorica Hamata . The peoples of the Orient, such as B. the Sassanids subsequently used this protection.

In ancient times , many scholars also dealt with the chain as a technical element for power transmission, such as the Greek precision mechanic Philon of Byzantium in his books Mechanike Syntaxis . A pumping station with a forged link chain was built as early as the 1st century BC. Built by the Roman architect and engineer Marcus Vitruvius Pollio .

The universal inventor, philosopher and artist Leonardo da Vinci (1452–1519) often sketched link chains in his drawings that are very similar to the block and leaf chains that are common today.

The Englishman Ph. White received the first patent for an iron anchor chain in 1634 . In 1686 the philosopher and scientist Gottfried Wilhelm Leibniz developed the "endless chain", which runs in a closed circle, for ore extraction in mining . In 1813, Th. Brunten constructed a link chain with bar links.

However, the chain did not gain its comprehensive significance today with the onset of the Industrial Revolution . The French André Galle invented the Gall chain named after him in 1829 and the Swiss Hans Renold acquired the patent for the steel link chain in England in 1880 . Due to the industrial production, the chain was then available in large quantities and could therefore be used in many different areas, e.g. B. also as a crawler belt in tracked vehicles . In industrial use, the chain was supplemented by wire rope from the middle of the 19th century .

In underground mining , the development went from the chain via the wire rope back to the chain. Until the mid-1940s, the coal plane was pulled on the coal side by means of a wire rope. With the development of the Löbbe planer in 1947, the round link chain replaced the wire rope previously used in planing operations underground (planer chain). The plow chain is described in its geometric structure and its technical requirements in DIN 22252. The dimensions range from Ø 26 mm to Ø 42 mm. The breaking forces are accordingly between 850 and 2220 kN. Using special materials (HO = Highly Optimized), these values ​​could be increased to 960-2520 kN.

In addition to the use of the plow chain in underground mining, a so-called conveyor chain is also used. The conveyor chains are mounted with scratches. With the help of this conveyor, the coal extracted is transported away. These chains are defined in the standards DIN 22252, and for flat chains in DIN 22255. In the course of the last few years, the classic conveyor chain in its geometric structure has been continuously developed by the chain manufacturers. One of these results is called the F-Class chain and is used in the range up to Ø 60 mm in the double center chain conveyor. The aim of these further developments is to increase the performance of coal production.

In order to build endless planer / conveyor chains in these dimensions, special connection locks are required. A distinction is made between flat locks according to DIN 22258-1 and block locks according to DIN 22258-2. The flat lock is used in the plow chain, where the block lock is mainly used in conveyor chains. The flat lock can run both horizontally and vertically through the chain wheel. The block lock may only run vertically through the chain wheel. 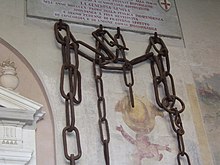 In principle, durable bronze or iron chains could only be made using forging technology from the beginning of their production until the late modern era . Attempts to manufacture chains using the casting technique were only partially successful because they broke easily. In the late Middle Ages , the chain smiths specialized as a special form (sub-guild) of blacksmithing . The profession existed until the beginning of the 20th century, but some chain smiths have survived to this day. T. demonstrate in museums . In the 1970s, making chain links with fire welding was part of the blacksmith's curriculum .

While there is evidence that the history of iron was probably first written by the Hittites , the discovery of anchor chains in Dur Šarrukin by archaeometallurgy shows that the Assyrians were familiar with the fire-welding of solid iron around 3000 years ago - one Connection that can withstand high loads.

The links of the first historical chains made of copper , bronze or iron could only be bent , riveted or interwoven ; a technology that until now from decorative reasons from Art forging is applied.

Other forms of application

Further use of the term

Over time, the chain also became a symbol for things that are connected to one another, such as: B. a mountain range , a trade chain , a carbon chain as well as an abstract term for temporally and spatially consecutive things .

In chemistry , catenanes are substances that, at the molecular level, consist of two or more rings - usually macrocycles - linked mechanically (like links in a chain) .

"Every chain is only as strong as its weakest (chain) link."