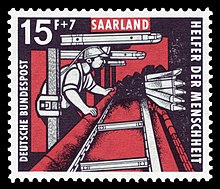 A coal plow is a machine that in the mining industry for extraction of coal seams is used. It peels off the coal at the front end like a plane . 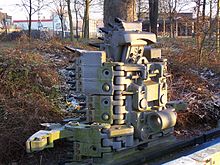 The first attempts to extract the coal by peeling go back to 1937. At this time, the first attempts at peeling extraction were carried out at the Ibbenbüren mine . Wedge-shaped cutting edges were welded to mine railway tracks. This construction was pulled along the ground along the seam with mine trains. Later, route robbers were used for pulling , which, connected to a rope, moved the planer construction back and forth and cut an approximately 0.15 meter wide strip from the excavation face. This was the first to prove that coal can also be extracted by peeling. The inventor of the coal plow was Konrad Grebe (1907–1972), a machine driver from Saarland , who was named a “Pioneer of Work” in 1943 for his groundbreaking invention or was honored with the Pioneer of Work award. This first coal plane was tested and used in the Ibbenbüren mine ; it already had a similar structure to today's coal plane. The designer Wilhelm Löbbe further developed the coal plane in 1947 for the Altlüner Eisenhütte Westfalia , the so-called "Löbbe plane " was used worldwide. As early as 1959, 20 percent of the coal mined in the Ruhr area was extracted with coal plows. 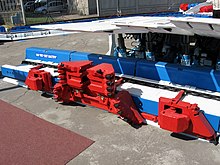 Each coal planer consists of a planer body, the lower part of which is shaped like a slide. Depending on the type of plane, a so-called sword plate is attached to the lower part. The extension parts, also called upper parts of the plane, are located on the plane body. The planing chisels are attached to the plane as the actual tool. These planing chisels are wear parts designed as chisels. They have a cutting width of around 20 millimeters and are interchangeable. So that the chisel tips do not wear out too quickly, the cutting edge of the steel planing chisel is equipped with hard metal at the tip . Depending on the working method, there are free-cutting, blocked free-cutting and blocked-cutting planing chisels. With modern planes, the chisel positions can be changed on the plane body. In addition, there are control devices for the cutting position on the lying surface and for the cutting depth on the coal face . The planer is moved by a chain that is connected to the planer drive. This plow chain is a high-strength round steel link chain, it is produced using the flash-butt welding process. Link thicknesses of 22 to 41 millimeters are used, depending on the plane. Improper handling or material fatigue can also break these chains .

The standard plane was developed from the Ibbenbürener plane by making several improvements to the plane. While the Ibbenbürener plane consisted of a basic body with paring knives and two towers as an attachment point for the traction ropes , the standard plane received decisive modifications. The planer had a pre-scraper and additional scraper blades. In order to move the planer better in hollows and saddles, it was equipped with a joint for height adjustment. The pull rope was reeved with rollers on the plane. However, like its predecessor, the standard plane did not have a sword plate and was moved at a low speed of up to 0.1 meters per second. At the end of the 1950s, the standard planer was replaced by the faster types of planes - the Löbbe planel and the add-on planer.

The Löbbe planer is a so-called high-speed planer. It has a walking speed of up to 0.38 meters per second and a cutting depth of 0.1 meters. The travel speed of the planer is about half the speed of the face conveyor. Instead of the pull ropes, pull chains were already used on this plane. The planer and face conveyor are coordinated with one another. A two-chain scraper conveyor is used as the face conveyor . The drives of the planer and conveyor are combined with one another. This eliminates the cumbersome reversing stations and pulling winches in the filling section. The plow is forcibly guided on plow pipes that are located on the face conveyor. The plow chain is guided back to the plow drive through these plow pipes. There is a sword plate under the plane. This plate grips under the face conveyor to stabilize the planer. So that the conveyor does not buckle, it is braced with tie bars. The device is named after the designer Wilhelm Löbbe .

The ripping hook plane is a plane with an additional chisel tower on top of the plane body. There are three-part and five-part ripping hook planes. The position of the individual chisel carriers can be varied. The height of the ground chisels can be changed without changing the cutting depth. With this planer, the planer body is pulled over a planing blade below the face conveyor. Thanks to this design, the hook plane does not require a planer guide on the coal face. The ripping hook plane is suitable for extremely thin seams from 0.6 meters, as its construction means it can also cut and load in thin seams.

Other types of planes

The compact planer consists of a roughly 100 millimeter wide planer body on which the entire plane is built. In the lower area of ​​the planer body, the planer is supported by an under-reaching bracket foot. The support in the upper area of ​​the plane is provided by the so-called plane overlap. The cutting shoes, in which the ground chisels are located, are located on the base body. The cutting shoes are of different widths and can be changed if necessary. In the upper area of ​​the planer body there are swiveling chisel carriers, into which different notching chisels can be inserted. The chisel body can be increased further. There are compact planes with a sword and without a sword. For large seams, the compact planer can be built up from three planer bodies that are coupled to one another. The cutting depth can be changed by cutting shoes of different widths.

The ramp planer has a plane body which consists of three articulated guide carriages . Each guide carriage is approximately 0.9 meters long. Due to the articulated coupling, the planer body can curve. The soil and notch bits are mounted on the control arms, staggered backwards in the cutting direction. The chisels are exchangeable, the upper chisels are rotatably mounted on the plane body. Chisels with different cutting widths can be used to change the cutting depth. With thick seams, an additional knife tower can be added to the middle guide carriage. It is also possible to extend the planer by adding additional guide slides. In the case of seams with slightly fluctuating thicknesses, these fluctuations can be compensated for by a reversible ridge knife bracket that is attached to the plane body.

The guardrail plane is a type of plane with a sword plate. The plane is guided on a guardrail and stabilized by a sword that grips under the armored channel on the offset side. The guardrail is attached to the coal face side of the face conveyor.

A coal plane in action

The coal plow itself has no drive. It is moved along the coal face with the plow chain, which is moved back and forth by the plow drive . The plane is pressed against the coal face by hydraulic cylinders that press against the faceplate. As a result, the plane peeled off a thick layer from the seam every time it travels . The miner calls the depth of cut the thickness peeled off by the plane. This method is also called peeling extraction due to the way it works . So that the planer remains at the desired cutting level, it is controlled accordingly via a planer control. The coal peeled from the seam is then pressed onto the face conveyor by the moving plow. There are different planing methods, depending on the planing speed and the cutting speed .

When the coal is released from the seam, a lot of dust is generated. This dust is moistened with various techniques using spray water and rendered incapable of flight. A distinction is made between the planer nozzle and the planer lane nozzle. When spraying the planer, the water is sprayed through nozzles on the planer body. The water is supplied via a hose that is placed in so-called drag hose troughs. The drag hose troughs are screwed to the top plates of the face conveyor. The hose is attached to the planer body and guided by an arm protruding over the face conveyor. Spray nozzles are installed in the top brackets of the face conveyor for the planer lane spraying. The spray nozzles are supplied with water via a hose that is connected to a solenoid valve. There are magnets on the plane body. When the planer drives past, the corresponding solenoid valves are activated and the respective area is sprayed with water. After an adjustable follow-up time, the water pressure closes the solenoid valve again.

Today, Caterpillar is the market leader in the field of fully automated planing systems .