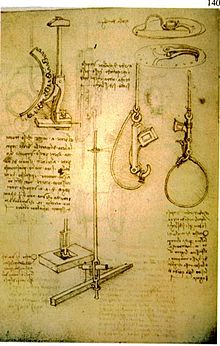 Draft of an automatically opening crane hook , Codex Madrid I

The Codex Madrid is a bound collection of sheets with notes, sketches and drawings by the Italian Renaissance artist Leonardo da Vinci (1452–1519).

The name Codex Madrid was given to the manuscript by the place where it was found, the Spanish National Library ( Biblioteca Nacional de España ) in Madrid , which still holds the work today.

Most of Leonardo da Vinci's manuscripts and drawings were kept in his villa near Vaprio d'Adda by his pupil and heir Francesco Melzi (around 1491/92 - around 1570) after his death . His son Orazio Melzi inherited the documents in 1570. The Madrid Codices, like other manuscripts by Leonardo da Vinci, were sold by Orazio Melzi around 1590 to the sculptor Pompeo Leoni (1533–1608).

The path of the volumes into the holdings of the Biblioteca Nacional has not yet been clarified. Although it had been known since the 19th century that the codes were in Madrid, they remained undetectable there until the late 1960s.

In February 1967 Jules Piccus (1920–1997), a professor of Romance studies and a specialist in early Spanish literature at the University of Massachusetts , searched the Biblioteca Nacional for medieval ballads . He came across two volumes of manuscripts which he identified as Leonardo da Vinci's manuscripts. The finds were called Codex Madrid I and II .

Realization of the Leonardo da Vinci Bridge in Ås, Norway

Draft of a gear or detail of a calculating machine

The sheets of both codes show the wide range of Leonardo's interests. They deal with painting , geography , mechanics , mathematics and geometry , weapons technology and architecture , including designing a bridge to cross the Golden Horn . According to da Vinci's plans, the Leonardo da Vinci Bridge was built as a pedestrian bridge in the Norwegian town of Ås in 2001 .

One of the drawings in the work is apparently a gear . The engineer and da Vinci expert Roberto Guatelli (1904–1993) compared the drawing with a similar sketch in the Codex Atlanticus manuscript ( Biblioteca Ambrosiana in Milan). In a controversial interpretation, he suspected a construction detail of a counter, the first calculating machine in world history.

"Read me, reader, if I give you pleasure, for very seldom do I return to this world."

- Leonardo da Vinci : the final movement of the Codex Madrid I .