This article deals with the font, for the album of the same name by Fiva & Radrum see Spiegelschrift (album) .

Under mirror font refers to a font that only when viewed through a mirror is readable in a conventional manner. Mirror writing based on the Latin script runs from right to left, and vice versa in Hebrew and Arabic . 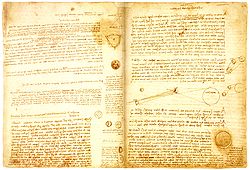 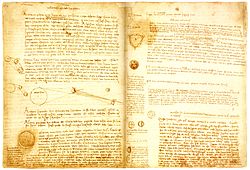 Mirror writing was a simple form of cipher writing for those who knew how to write, especially in times when large parts of society were still illiterate . It is believed that it was used for this purpose by Leonardo da Vinci in his manuscripts, among others . Another thesis is that Leonardo da Vinci was left-handed and that mirror writing was therefore more advantageous for him.

Mirror writing is mainly used for stop signal generators and vehicle lettering so that these can be read in plain text in the rear-view mirrors of the vehicles in front. Rescue , fire-fighting and other emergency vehicles in particular often have writing on their front such as “ambulance” or “fire brigade” in mirror writing. This type of lettering is also occasionally used for advertising purposes.

The motifs for peep boxes were labeled with mirror-inverted titles, which were legible for the peep box in plain text.

Many left-handers are able to write in mirror writing with little or no practice - especially if they have learned to write with the right hand, as they then have unconsciously saved mirror writing for the left hand. For them, mirror writing has the advantage that the writing hand does not cover the last letters written and possibly blur them in the process.

Mirror writing can easily be generated with appropriate computer programs. Texts that are stuck on glass surfaces and viewed through the kaleidoscope also appear in mirror writing.

Identity of the letters

Most letters look different than mirror writing (q, r, s, k, etc.). Some letters look identical despite being mirrored, although this may vary depending on the font, but it definitely applies to certain fonts. The identity affects both certain capital letters (A, I, U, H etc.) and certain lower case letters (o, v, w etc., but also i, l written as a line). Certain characters also look mirror-inverted, e.g. B. the exclamation mark (!). By the way, some letters look like other letters when they are mirrored. The lowercase b looks like a d, the p like a q. This also depends on the font, but applies to certain fonts.