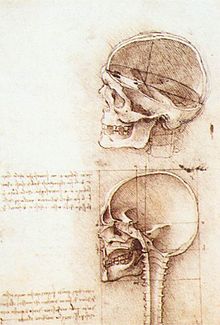 Sagittal sections of the human skull 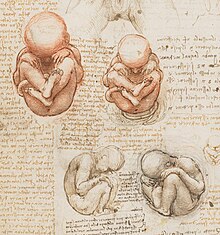 Child position of the fetus in the womb

The Codex Windsor is a collection of sheets with artistic drafts and studies of anatomy by the Italian Renaissance artist Leonardo da Vinci (1452–1519).

The collection today consists of 606 individually cataloged sheets of various formats. They are dated to about the period 1478 to 1518. The texts and comments were written by Leonardo in his characteristic mirror script. The sheets contain contributions to art and painting , studies of people, animals, plants and landscapes as well as mechanics , weapon technology and anatomy .

The 153 sheets with drawings on anatomy were previously combined in three volumes: Anatomical Manuscript A (18 sheets), B  (42 sheets) and C  (93 sheets). The anatomical manuscript C was in turn divided into six anatomical notebooks, the Quaderni di anatomia I − VI .

Leonardo da Vinci began studying the anatomy of the human body in the late 1470s. It is possible that he attended first sections at the University of Padua . His records indicate that he began to make sections himself around 1505. Around the year 1518 he reports having autopsied a total of thirty corpses in his life. He seemed to be particularly interested in the movement system and the systems of the internal organs.

Leonardo's drawings show full-body representations in different phases of the dissection as well as individual limbs and organs. He repeatedly depicts body parts through cuts and is therefore often cited as the historical founder of tomographic imaging in medicine.

Most of Leonardo da Vinci's manuscripts and drawings were kept in his villa near Vaprio d'Adda by his pupil and heir Francesco Melzi (* around 1491/92 - † around 1570) after his death . His son Orazio Melzi inherited the documents in 1570. Around 1590, Orazio Melzi sold over 2,500 individual sheets to the sculptor and art collector Pompeo Leoni (1533–1608).

Leoni tried to organize the manuscripts thematically and separated Leonardo's artistic drafts from the technical and scientific drawings. He cut up sheets of paper and glued together others that did not originally belong together. He summarized Leonardo da Vinci's anatomical drawings in several volumes, which were later named Codex Windsor together with other thematically differently oriented manuscripts .

The way of the Codex Windsor into the holdings of the Royal Collection has not yet been clarified. It was probably acquired by King Charles I or Charles II in the 17th century . It is certain that Queen Mary II had the sheets shown to the Dutch statesman Constantijn Huygens in Kensington Palace in 1690 .