Portrait of a Woman (Colombine) ; around 1520; St. Petersburg, Hermitage 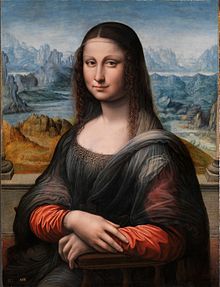 The Mona Lisa from the Prado , presumably by F. Melzi

Portrait of a Man with a Parrot ; around 1525; Milan, private property

Francesco Melzi (* around 1491/92 in Milan , † around 1570 in Vaprio d'Adda ) was an Italian painter of the Lombard school, favorite student of Leonardo da Vinci and his main heir.

As the son of the noble Milanese patrician family Melzi , he made contact with Leonardo da Vinci as a boy. On September 28, 1513 he left for Rome with him . From then on he stayed close to Leonardo's and even accompanied him to France in 1517.

There Leonardo was visited on October 10, 1517 by Cardinal Luigi von Arragon. He found an old master who was unable to use his hand due to paralysis. But the cardinal's scribe noted that his Milanese pupil, it can only be Francesco Melzi, painted under the master's guidance and was so good at it that his pictures cannot be distinguished from those of Leonardo's. Leonardo, too, was so impressed by the ability of his pupil that he developed his later works with him and they both probably worked together. Some works that were previously considered works by Leonardo himself are now ascribed to Melzi, such as B. the famous Colombina in the Hermitage, in Saint Petersburg.

When Leonardo died on May 2, 1519, Melzi inherited (according to the will of April 25, 1519) the entire graphic and scientific estate of the master.

According to the records of Leonardo's servant Battista de Villanis on August 10, 1519, Francesco Melzi remained in the service of the King of France for some time before he returned to Italy. There he seems to have enjoyed a certain reputation as heir to the great Leonardo, because the Ferrarese manager in Milan tried in 1523 to win Melzi for Duke Alfonso I d'Este . Perhaps because he was wealthy himself, Melzi painted very little at his age. A controversial example of Melzi's late style is the portrait of a young man with a parrot , which has little in common with the works of Leonardo and is more reminiscent of the Roman school in the wake of Raphael .

Melzi was involved in the care and maintenance of the Leonardo estate. He collected Leonardo's writings on painting under the title Trattato della Pittura .

Around 1570 he died in high esteem at his family seat Vaprio d'Adda. The Leonardo estate, which he had carefully guarded, was recklessly sold by his heirs and the valuable material was scattered. It is estimated that 25 to 80% of Leonardo da Vinci's manuscripts could have been lost. Today a little more than 6000 sheets are preserved.

At the beginning of 2012, restorers discovered an exact copy of Leonardo da Vinci's Mona Lisa in the Prado in Madrid after it had been painted over. It is believed to be a painting by Francesco Melzi who copied his master by painting in parallel with him.

recently attributed; was previously considered the work of Bernardino Luini